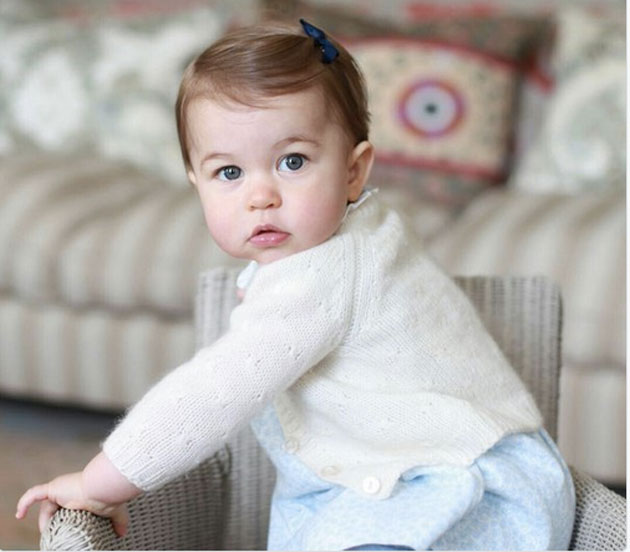 Britain’s Princess Charlotte was gifted a £30,000 white gold rattle to celebrate her first birthday.
The daughter of the Duke and Duchess of Cambridge turned 12-months-old on Monday (02.05.16) and was gifted an 18k white gold rattle, which had been studded with diamonds, rubies and sapphires by the Natural Sapphire Company.
A spokesperson for Kensington Palace said: “The couple have taken a number of gifts into their home, some gifts are stored within the Royal Household, and some gifts were donated to organisations which could make good use of them.”
Elsewhere on the list of gifts given to the Princess over the last year, US President Barack Obama and First Lady Michelle Obama are recorded as having given her a jigsaw puzzle and a soft toy version of their dog Bo, whilst Britain’s Prime Minister David Cameron gave her a copy of Hans Christian Andersen’s Fairy Tales.
Canadian Prime Minister Justin Trudeau bought Princess Charlotte a snowsuit and a book and also made a donation of around £54,500 to Immunize Canada, which promotes vaccine usage, in her name.
Her grandfather Prince Charles got her a willow rattle made by Irish basketmaker Ciaran Hogan whilst her auntie Pippa Middleton gifted her biodegradable diapers, which are made from natural cloth.
Meanwhile, during the royal family’s trips around the world, the country’s officials have, too, been offering gifts for the royal princess.
On their most recent visit to the Kingdom of Bhutan, King Jigme and Queen Jetsun gave Prince William and Duchess Catherine matching coats for Princess Charlotte and her older brother Prince George, two whilst the Prime Minister of New Zealand offered the royals some teddy bears, baby blankets and shoes all made from Stansborough wool, brought back to the United Kingdom by Prince Harry. The Australian government opted for a similar gift – a cot blanket made from Tasmanian merino wool.
During their visit to the United Kingdom last year, China’s President Xi Jinping and his wife Madame Peng Liyuan offered Princess Charlotte a set of silk figurines, which depict the Chinese novel ‘Dream of the Red Chamber’.