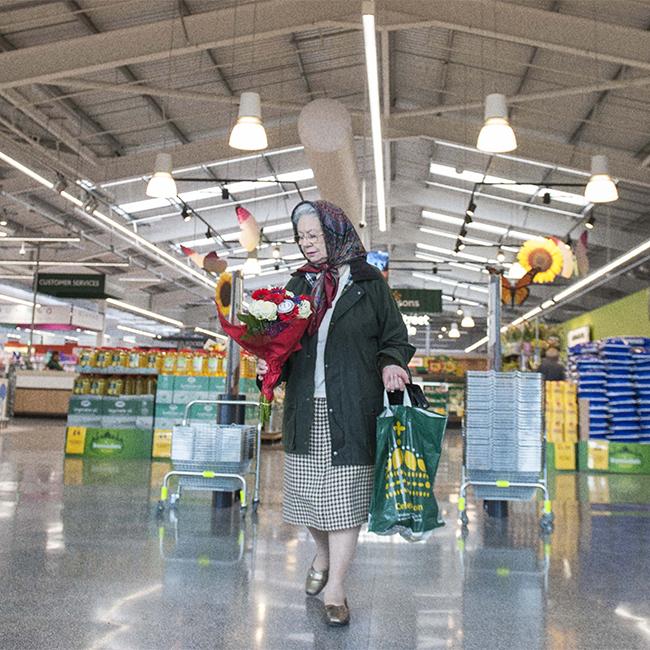 A British supermarket is holding their own celebrations to mark Queen Elizabeth’s 90th birthday.
Morrisons – which has renamed one of its stores Ma’am-orrisons to mark the occasion – will serve their own version of the Patron’s Lunch over the weekend at their cafés for those who missed out on a ticket to the event on The Mall.
The £1.25 lunch menu includes a sandwich and cream-filled scone and was launched by a lookalike of the Queen.
The Queen impersonator was spotted dining on some Elizabeth Sponge in the Morrisons café and dancing down the supermarket aisles to tracks from Queen as well as ABBA’s ‘Dancing Queen’ and Bruce Springsteen’s ‘Queen of the Supermarket’.
To help those who are marking the celebration at home, Morrisons have launched a number of royal-inspired treats including Elizabeth Sponge, a triple layer cake, and a Clarence the Corgi Cake to serve up to 12 people.
Also on offer is a Royal Bouquet featuring white Avalanche, red Germini Suri and blue Gypsophila as well as a Celebration Sandwich Platter, where customers can choose their favourite ones from a choice of 14 different options.
Morrisons spokesperson Andy Atkinson said: “Millions of people are on a budget, but want to take part in this special occasion, so we’ll be doing our bit to bring people together in our cafés and celebrate the 90th birthday of our longest serving monarch.”
Watch the God Save Our ‘Beeping’ Queen film on YouTube: https://youtu.be/CYg0J0LJJEI or the Morrisons Facebook page: www.facebook.com/Morrisons