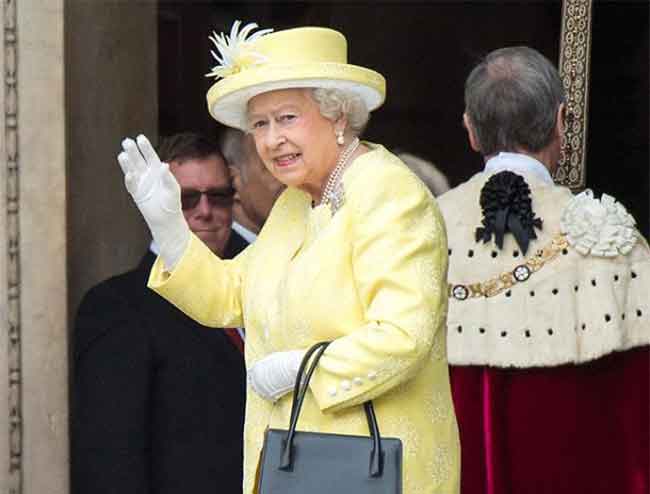 Britain’s Queen Elizabeth got stuck in traffic on her way to a National Service of Thanksgiving to mark her 90th birthday.
The monarch arrived 10 minutes late to the service at St Paul’s Cathedral on Friday (10.06.16) after getting stuck behind traffic due to an accident at Embankment.
As she made her way to the cathedral’s great west door, the Household Calvary, led by Trumpet Major Philip Bishop, played a fanfare to announce her arrival.
Joined by her husband Prince Philip, the Duke of Edinburgh – who marks his actual 95th birthday on Friday – the Queen entered the cathedral to another fanfare, this time played by the Fanfare Trumpeters of the Band of Her Majesty’s Royal Marines Portsmouth.
The Queen – who looked radiant in a yellow outfit – was then greeted by Justin Welby, the Archbishop of Canterbury as well as the Bishop of London, the Right Reverend Dr Richard Chartres.
The Dean of St Paul’s, Reverend David Ison, told the congregation gathered in London: “Most especially today do we give thanks for the length of years that has been granted to our most gracious Sovereign Lady, Queen Elizabeth: for her faithful devotion, dutiful commitment, loving leadership, gentle constancy, royal dignity and kindly humanity.
“And, as we give thanks for Her Majesty, so also do we give thanks for Philip, Duke of Edinburgh, and all the Royal Family: for mutual love and support and for service to this country and to the Commonwealth.”
Sir David Attenborough also spoke the Reflection on the Passing of the Years, which was written by Paddington Bear creator Michael Bond.
Earlier on Friday morning, the Duke and Duchess of Cambridge, Prince Harry, Princess Eugenie, Zara Phillips and Mike Tindall were all seen arriving at the cathedral for the service.