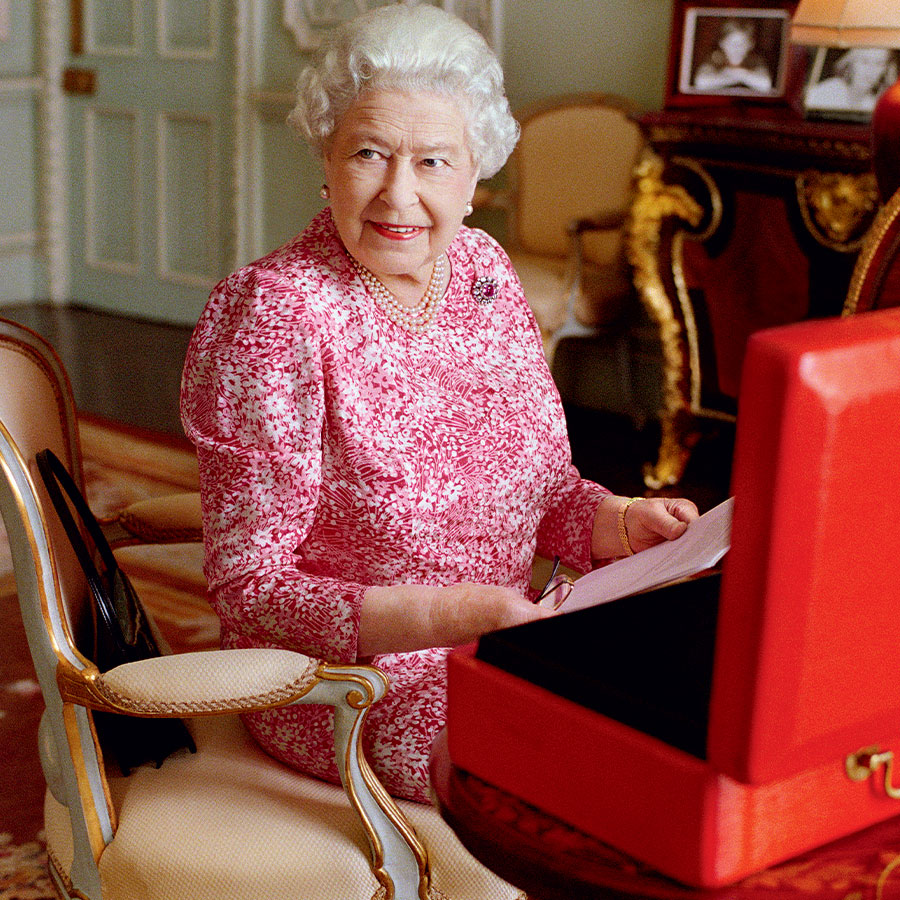 The good news is that Her Majesty’s grandchildren keep procreating, keeping the Royal lines robust.

The more precipitous news? That there’s no room at the inn.

During the traditional December rigmarole at Sandringham, held this most recent Christmas—set amid the Victorian splendour of the A-grade country pile—months-old Princess Charlotte became just the latest add-on to a guest list 31 people deep. The crammed affair meant—as with other recent gatherings headed up by a near-nonagenarian Queen Elizabeth—royals lower down the pecking order were asked to sleep in servants’ quarters, while some servants were required to share rooms or, well, even move to outhouses on the estate.

As far as portraits go, it was a heady one: here loomed a monarch who’d only just passed the threshold of oldest reigning, surrounded now by kin from four different generations, all of it fusing to cast a very particular psycho-subtext frisson. On one side of the column, as the gong went at 8 p.m. for pre-dinner drinks and the family sat down for a candlelit supper starting promptly at 8:15 (men in black tie, women in their finery and jewels): the sine qua non Elizabeth II, who only floated into her role when her father, King George VI, died peacefully in his sleep in this very house in the early hours of Feb. 6, 1952.

On the other, as gifts were later being exchanged (it being the Windsor ritual to do so the night before, rather than Christmas morning): the Instagram-worthy brood-within-a-brood that is Kate, William and their two tots (plus Uncle Harry).

Everyone else (including William and Harry’s own father, the pensioner-aged Charles who waits and waits) might well have been slotted into the category known as the “squishy middle.”

Oh, paging Julian Fellowes. Clearly, though, even his merry band of Crawleys has nothing on the interweaving threads of this dynastic tale. Within the complex geometrics of British Royalty, what was palpable on Christmas—and never more palpable than when William and Kate walked side by side and to great flurry to the royal service held at St. Mary Magdalene Church—is the extent to which a stealthy synergy lies between the matriarchal mainstay of this clan and its next next generation.

That is to say, the queen, who was only a dewy 25 when she ascended the throne—a “millennial” in her time, lest we forget—is the ma’am who has faithfully kept the fires burning for all these decades but, as she is only too keenly aware, it is Charles’ spawn with the late Princess Diana who command the attention now and, hence, the leverage. Without the oxygen of the public’s attention, after all—and the myth making that’s central to a monarchy’s existence—there is no future, no mojo.

And as with many a family dynamic, furthermore—in which the relations are cordial but cool between a parent and child, but things are splendorous and prickly-free between a grandparent and a child—the harmony between the monarch and Wills/Kate/Harry is the great narrative royale of our time.

“She’s never even contemplated abdication,” declares Sarah Bradford, one of the shrewdest of royal observers and the author of Queen Elizabeth II: Her Life in Our Times. Musing on the long-serving sovereign who regards her job as one for life, Bradford is keen to footnote that “she’s not staying on because of any concern about [Charles’] abilities as king. The Queen simply feels she must do her duty.”

Call it kismet or call it a law of unintended consequences, but what this has effectively meant is her son at 67 now holds the record for oldest heir to the British throne in 300 years. (FYI: the oldest heir of all time was Sophie of Hanover, who was declared the rightful heir to Queen Anne but never got to be crowned because she perished in 1714 at the age of 83, two months before Anne. Oops.)

As far as the realpolitik of the present-day British first family goes—and its place as a global brand, if you will—the hopscotch past Charles has been underway for some time. Certainly, at least since 2009, when overtures toward a Nintendo generation began, say royal watchers, and “behind the closed doors of Her Majesty’s private office, the subject of Prince William has taken precedence over every other State matter in recent months,” as Katie Nicholl, an expert Harry-and-William tracker, put it then. Within the Queen’s inner circle the rumour was that William was being lined up as a “shadow king.” Then still a year away from his sparks-causing nuptials at Westminster Abbey and training as a search-and-rescue helicopter pilot, it was the moment where William—relatively coy in terms of public engagements—really got “off the bench.”

Kate, Kate, Kate, Kate, Kate. Where this saga swoops. Soon enough, the commoner would become the secret ingredient in this recipe – the fresh truffles of the present-day monarchical feast. Where William has gifts of his own but indubitably grew less golden as he aged, there is little question that it is the image of him and the now-Duchess of Cambridge as a team that has given them a combined oomph. Glossy of hair. Prim as a martinet. Ps- and Qs-minding and yet dutifully clothes-recycling and Pinterest-mommy-set-seeming. If nothing else, Kate proved to be the right princess for the right moment, to the extent that novelist Hilary Mantel once described her as one who was “designed by committee and built by craftsmen.”

No matter. The press clips speak for themselves. Exhibit A: celebrity magazine, People, which featured Diana 57 different times on its cover (a record), but, after her tragic death in 1997, where royal coverage withered to a drought. With nothing to feed the beast, it was a muffled period in the annals of the Windsors … until, well, Kate. “She is already our fourth most featured cover star,” said Simon Perry, the magazine’s chief foreign correspondent, in an interview. And that was at the end of 2014!

Her influence is not only on William but on the whole family—to the extent that some think that the whole titled clan has “now been completely Middletonised,” as per Tom Sykes, the royal watcher for The Daily Beast. Contrary to those days when the upper classes frequently married the middle classes (for moolah!) and the middle-class arriviste swiftly moved to adopt the mores of that upper class, the mobility has been moved in near reverse. Rather than Kate marrying William’s family, it is, Skye argues, more and more apparent that he wed into hers, as per the image of Kate’s parents being the first to greet the couple’s first-born, the third-in-line Prince George, at the hospital nearly an hour before Prince Charles. The Queen did not see the baby until the next morning at Kensington Palace. “Although there is no official protocol in such matters, there is little doubt that it should have been the Queen or Prince Charles who was the first to see the baby,” wrote Sykes.

The move to a new informality is also one that is signposted by the embrace of a breezy tone on Twitter (which Kensington Palace increasingly uses to communicate to the public) and even a less fussy approach to public engagements. With Prince William’s press operations having been taken over by one Jason Kanuf (a youngish outsider who was hand-picked by the Prince), the shift is best demonstrated by the use of Kate/Wills/Harry as a power trio of sorts during royal walkabouts.

Kate and William together are potent, but add the crowd-pleasing Harry to the mix, and the rapport immediately becomes more larky, more loose, more rousing. As Sykes puts it, “Kate looks less reliant on husband, William looks less stiff—and William and Kate subliminally impose some manners on Harry.” All of which is important to note because not so long ago, a traditional royal visit—carried out by, say, Princess Margaret—would involve nothing more than some dainty ribbon snipping.

A brave new world, for sure, but one that has the tacit approval of Her Majesty. For, if there’s anyone who understands the capriciousness of her legacy, it is she who, as a young girl, watched her father take on the crown after the scandalous abdication of her uncle, King Edward VIII, and who weathered her own storm when Diana passed away (during which the public mood shifted most precariously and, sensing a lack of apropos feeling, the nation-wide criticism crescendoed when one newspaper ran the headline, “Where is the Queen when her country needs her?”) She weathered and then she rallied.

A woman who has lived her entire life in the public glare and still remains impenetrable knows all too well that the promise of the “family firm” lies in other hands. And so it goes on: The Queen furnishes gravitas, while the grandkids provide elasticity.