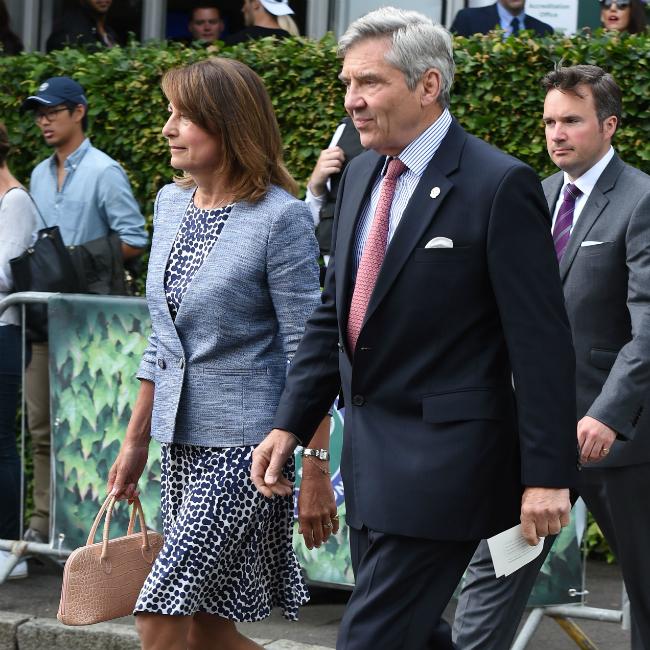 Carole and Michael Middleton were guests of the Royal Box at Wimbledon yesterday (30.06.16).
The couple – parents of the Duchess of Cambridge – were all smiles as the attended the world famous tennis tournament at the All England Club in South West London.
They were joined by Camilla, Duchess of Cornwall, and all three happily waved to the crowds ahead of an exciting day of tennis on centre court.
Carole opted for a spotty Jaegar silk dress, which she teamed with a light blue jacket and nude heels. It is the same dress she wore to grandson Prince George’s first birthday in July 2014.
Camilla also opted for a polka dot dress for her day out, which she teamed with a white jacket.
Carole and Michael’s other daughter, Pippa, attended the first day of the championships on Monday (27.06.16) and she wowed the crowd in a poppy print dress.
Earlier this year it was revealed Queen Elizabeth admires the Middleton family and is a fan of their self-made success with their children’s party supplies company, Party Pieces.
Dickie Arbiter, the queen’s former Press Secretary, said: “The queen would like Carole and Michael because they epitomise people who have made a success of their lives. They didn’t get a handout, they had to work hard. The Queen would also like the fact that they demonstrate the strength of the family unit.”