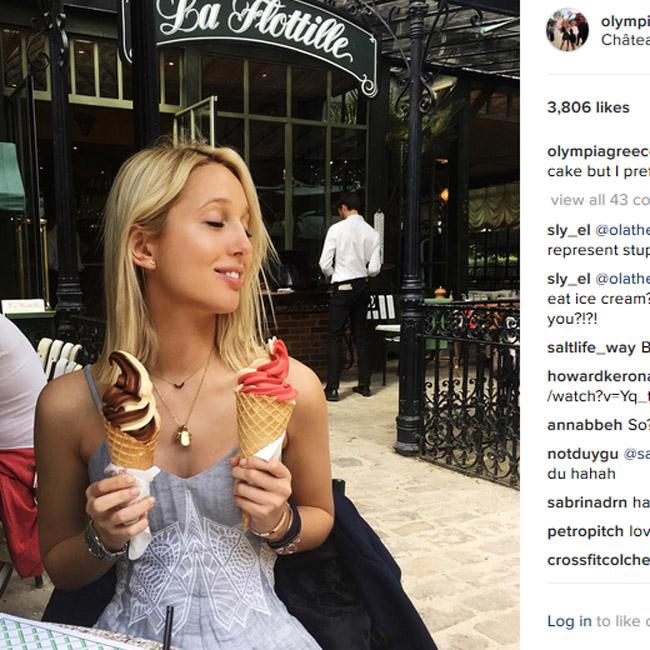 Greece’s Princess Maria-Olympia “prefers” to eat ice cream.
The 19-year-old royal has jetted off to Paris, France, for the summer where she has embarked on a spot of sightseeing and has indulged in gelato’s since she landed in the capital city whilst her family celebrated her younger brother Prince Aristides’ eight birthday in London, England.
The aspiring fashion designer documented her visit via social media, and previously posted a picture of her holding two ice creams, which she captioned: “She said let them eat cake but I prefer ice cream (sic).”
The blonde beauty visited the Palace of Versailles, endured stomach-churning rides at the Tuileries Gardens, and attended the Maison Valentino and Giambattista catwalk shows during Paris Haute Couture Fashion Week with her friends Peter Mark Brant and Caterina Bellious.
However, the oldest child of Prince Pavlos and Princess Marie-Chantal of Greece has returned to her home country and has recently shared a picture of the calm serene ocean in Porto Cheli, which is situated in the south east region of Argolis, Greece.
Meanwhile, it is alleged the Greek royal family are in talks to relocate from the sunny country to New York City over the upcoming weeks to be closer to their daughter who is currently living in SoHo in the American capital whilst she is studying photography at Parsons School of Design.
And it is alleged the move is also due to Maria-Olympia’s mother’s decision to embark on a University degree herself at Georgetown University next year.