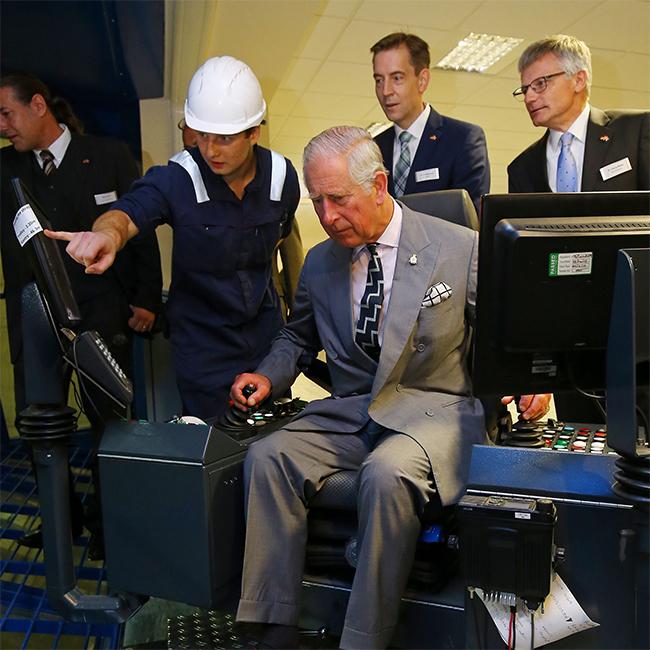 Prince Charles was taught how to operate a gantry crane and grabber during his tour of South West England.
The 67-year-old royal toured the Devonport Energy Waste Combined Heat and Power (CHP) Facility in Plymouth, England, which creates energy from rubbish thrown out by local residents.
During his tour, the Prince of Wales was allowed to sit in the control seat of the heavy machinery whilst he was told how the waste processed at the facility generates heat and electricity for the nearby Naval base.
Meanwhile, Duchess Camilla was at BBC South West’s headquarters to open the brand new building.
The Duchess of Cornwall was shown the new facilities and visited the radio and television studios as well as the news and planning desks.
Speaking earlier this month, Leo Devine, the Head of Regional Programming for BBC South West, said of the Duchess’ visit: “We are so honoured that Her Royal Highness, the Duchess of Cornwall has accepted our invitation to open the new BBC South West Headquarters. As a team, we are incredibly proud of this major project which reinforces our commitment to the region’s audience as the biggest national broadcaster in the area.”
The new building has been awarded the SKA silver award in environmental credentials for the several energy efficient benefits including LED lighting, solar panels and electric car charging points for BBC vehicles.