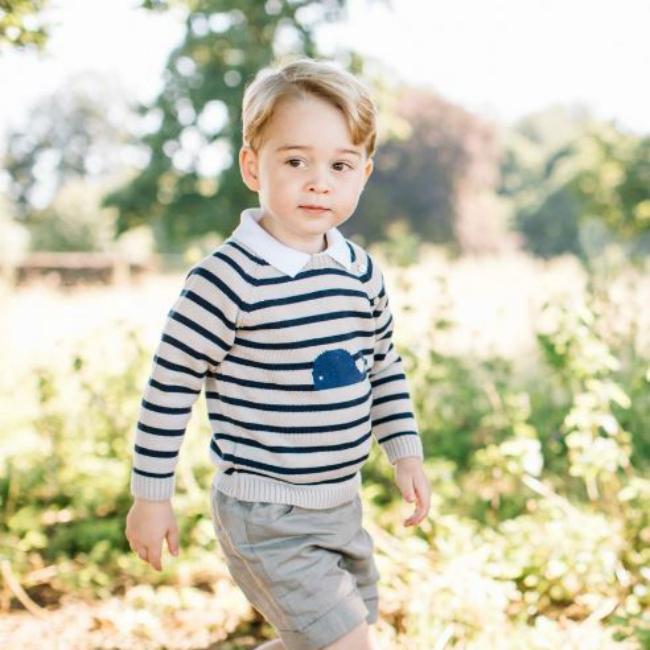 Kensington Palace have released new pictures of Prince George on his third birthday.
The royal household’s Twitter shared four new photographs of the young prince to mark the special occasion today (22.07.16), and admitted his parents Prince William and Duchess Catherine – who also have 14-month-old daughter Princess Charlotte – “can’t believe” he’s already three years old.
A series of captions attached to the tweets read: “Here are some new photos of Prince George on his 3rd birthday!
“Matt Porteous took the photographs of Prince George at The Duke and Duchess’s family home in Norfolk recently.
“The Duke and Duchess thank everyone for all the lovely birthday messages they have received for Prince George.
“Can’t believe it’s been three years already!”
The images show George in a blue and white striped top and a pair of navy blue shorts.
In one, he is playing with William and Catherine’s dog Lupo and in another he is seen gazing out into the sunlight while holding onto some rope.
He is also pictured in an adorable jumper with what seems like a whale on it.
George is due to have a party at his Anmer Hall home in Norfolk, east England, to celebrate his birthday.
What’s more, he will enjoy a second party at his great-grandmother Queen Elizabeth’s Scottish residence, Balmoral, in the coming weeks alongside his parents, who are both 34, and little sister.
The birthday boy is thought to be getting a Bolonka Zwetnas puppy for his birthday as well as a train set from William and Catherine.