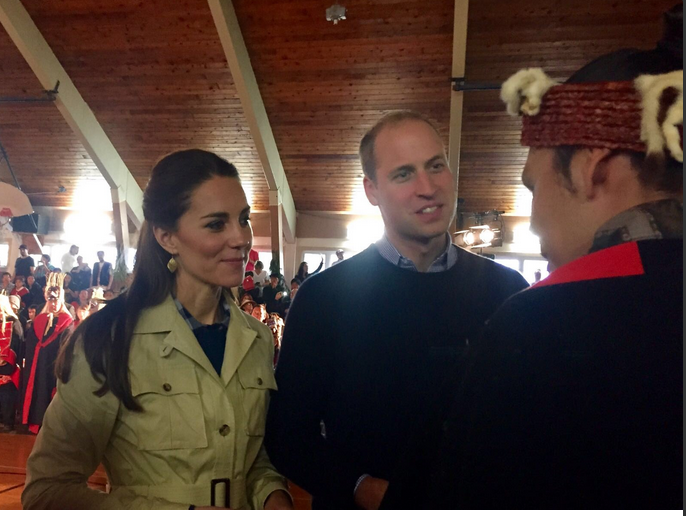 Prince William has praised a First Nation tribe for helping save a rainforest.

The prince and his wife Duchess Catherine visited the remote village of Bella Bella in Canada on Monday (26.09.16) and he passed on a thank you message for his grandmother Queen Elizabeth for their part of The Queen’s Commonwealth Canopy network, which has helped saved the important conservation area.

He said: “Her Majesty has asked me to convey her sincere thanks to the Government of British Columbia, and the Federal Government of Canada, for nominating your innovative Ecosystem-Based Management programme in Great Bear to be part of The Queen’s Commonwealth Canopy network.

“This is a substantial dedication which will highlight a more collaborative approach to sustainable forest conservation. Other Commonwealth countries will benefit from sharing the knowledge and expertise you have gained by working together with First Nations, industry and environmental organisations to establish this unique forestry management programme.”

The Queen’s Commonwealth Canopy was launched in Malta last year and urged the 53 Commonwealth nations to contribute areas of indigenous forest, to be preserved in the monarch’s name, and substantial progress has already been made, with all the countries expected to have joined by 2018.

William continued: “I am pleased to say that more than 15 countries have already dedicated forestry projects or are planting new forests, with another 10 finalising their submissions.

“The Commonwealth has at its heart always been about the values that bind its people.

“This project, focusing on our shared natural heritage, is no different.

“The establishment of the Canopy is a loud and unambiguous statement that the citizens of all Commonwealth countries believe that nature is fundamental to the health of our societies.

“When we protect our rivers, oceans, atmospheres, or like today, our forests, we are telling our children that their future prosperity cannot be disconnected from the health of the natural world…

“I have no doubt that other Commonwealth nations will be inspired by what you have achieved here.”
The royal couple had received a traditional greeting, while the floors had been blessed ahead of their arrival as a sign of respect.

William and Catherine – whose children Prince George, three, and Princess Charlotte, 16 months, remained at their temporary residence in Victoria with their nanny – had been due to take an aerial tour of The Great Bear Rainforest, but it was called off due to bad weather.