William and Kate Impressed by Street Dancers in Whitehorse 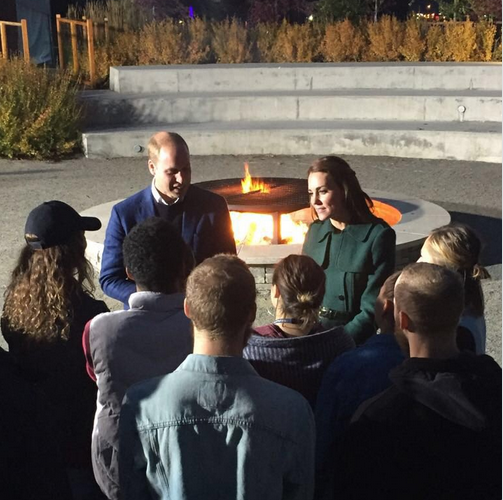 The 34-year-old prince and his wife Duchess Catherine watched a group of young people perform a street dance at a cultural centre in Whitehorse, Canada, and he admitted afterwards he had wanted to join in and show off his “moves”.
Performer Carly Fredrickson, 22, said: “They were really impressed and they made jokes about how he’s a really good dancer and he wanted to get up and dance with us.
“He said he has some moves and she agreed.
“He said he did want to get up and dance while we were performing.”
The royal couple got to see a variety of different performances at the Kwanlin Dün Cultural Centre as the facility staged a show called ‘Land of Gold – A Yukon Cultural Celebration’.
Travel Yukon, who organised the event, described the event as: “This presentation highlights the diversity and depth of Yukon’s cultural scene.
“Tune in to see dancers, drummers and musicians from a variety of genres and backgrounds share their songs and stories.”
Earlier in the day, William and Catherine, 34, tucked into a “phallic” clam known as a geoduck, which boasts a long neck that some diners find off-putting, when they met with young chefs at a food festival.
William admitted: “Presentationally they are quite challenging.”
But chef Ned Bell explained: “They are getting more popular all the time.
“It is an extraordinary species. You can eat the body, but you can also eat the neck raw, which is what they ate.
“It is absolutely phallic, but at end of the day it is a clam.
“Here on the west coast we have some of the best wild, well-managed shellfish in the world.”
Another busy day on their tour of Canada also saw the pair – whose children Prince George, three, and Princess Charlotte, 16 months, remained behind at their temporary home in Victoria – join the University of British Columbia Okanagan’s 10th anniversary celebrations.
However, they were snubbed by Grand Chief Stewart Phillip, Okanagan Nation Alliance Chairman and Spokesperson, who pulled out of the event at short notice, a day after refusing to attend a reconciliation ceremony with the British couple in protest at the plight of the First Nations people.
Instead, they were joined at UBC by Chief John Kruger of the Penticton Indian Band.
He urged the couple to speak out for reconciliation for Aboriginal Peoples.
He said: “True reconciliation involves the honour of the Crown, the federal government, provincial government and the indigenous people of this land.”