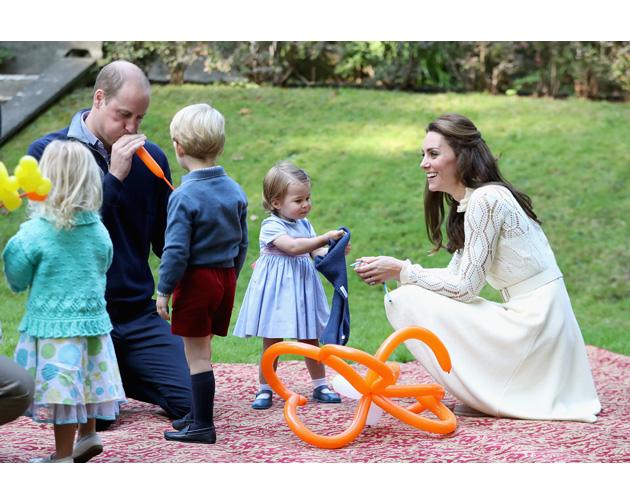 Prince George and Princess Charlotte were lavished with attention during the royal family’s official visit to Canada (September 24-October 1).

It’s no surprise that the real stars of the 2016 royal visit were Prince George, 3, and Princess Charlotte, 16 months. From the moment they waved their little hands and descended from the plane with their parents in Victoria, BC, it seemed media outlets and royal watchers just couldn’t get enough of the little siblings.

Whether they’re smiling shyly for the cameras or denying prime minister Justin Trudeau a high-five, there’s no doubt the kids are the real draw. And we’ll bet Charlotte’s adorable blue bow and George’s knee-socks also had something to do with it.

And while they only made it out to a couple of events with their parents during the week-long trip, they charmed everyone across the globe.

Princess Charlotte attended her first-ever royal engagement with her parents and big brother. They were invited to a children’s party for military families (September 29) on the beautiful green grounds of Government House in Victoria—and the little princess even said her first words at a public event. The tiny royal was overheard yelling “pop!” while chasing after balloons. And, according to ITV News, the toddler referred to her father as “da da.” A massive amount of TV programs and news articles have been devoted to royal coverage, specifically the outings with the children. William and Kate have made no secret of their desire to keep George and Charlotte somewhat secluded and out of the limelight—especially William, who knows a fair bit about what it’s like to grow up (not to mention grieve for one’s mother) in the glare of cameras.

It’s admirable that Kate and William want to offer their kids as normal a childhood as possible—no easy task when you’re members of the monarchy in a tabloid-obsessed country.

However, that just means that when George and Charlotte do attend official public outings, it’s a grand spectacle purely based on its rarity. Whether you’re a fan of the British monarchy or not, they’re hard to avoid, especially when the kids are out and about.

And bringing their adorable children along for the whirlwind tour has been an ideal opportunity to boost the monarchy’s overall image—both within the Commonwealth and on a broader international stage.

“The Canadians adored the newly married couple and I can just see this being the trip to top all others [with the children there],” London-based royal biographer Katie Nicholl told CBC. “William and Kate and their advisers know this as well. There is no better way to promote a bright, new optimistic future for the Royal Family overseas than this gorgeous, telegenic foursome.”

Bringing little George and Charlotte definitely didn’t hurt. In fact, they’re likely the main reason why the royal visit was such a resounding success.