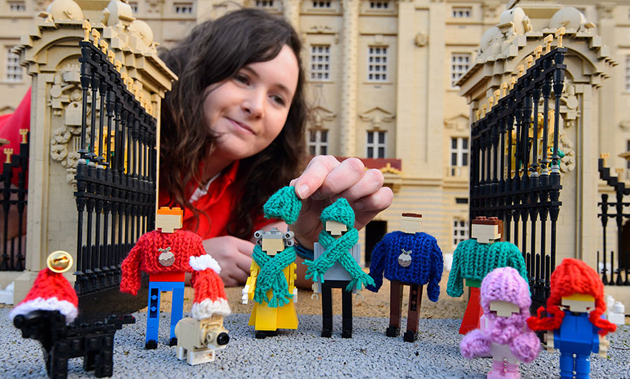 Prince William and Duchess Catherine have been turned into LEGO for Christmas.

The royal couple and their two children, Prince George, three and 18-month-old Princess Charlotte, were honoured with their very own scene made out of the famous interlocking plastic bricks at LEGOLAND Windsor.

They are seen posing outside Buckingham Palace donning festive knitwear and are seen with Queen Elizabeth and Prince Philip, who have hats and scarves.

Prince Harry is also there in his very own Christmas jumper.

It took a team of LEGOLAND Windsor staff 306 hours to complete the Christmas in Miniland, which will be on display during the theme park’s Christmas Bricktacular season, which kicks off on December 3.

Meanwhile, this year William and Catherine will join the Queen at Sandringham for the festive period.

And while George and Charlotte will be spoiled with gifts by friends and family, William recently said he wants to teach his children that it is the simpler things in life that are more important.