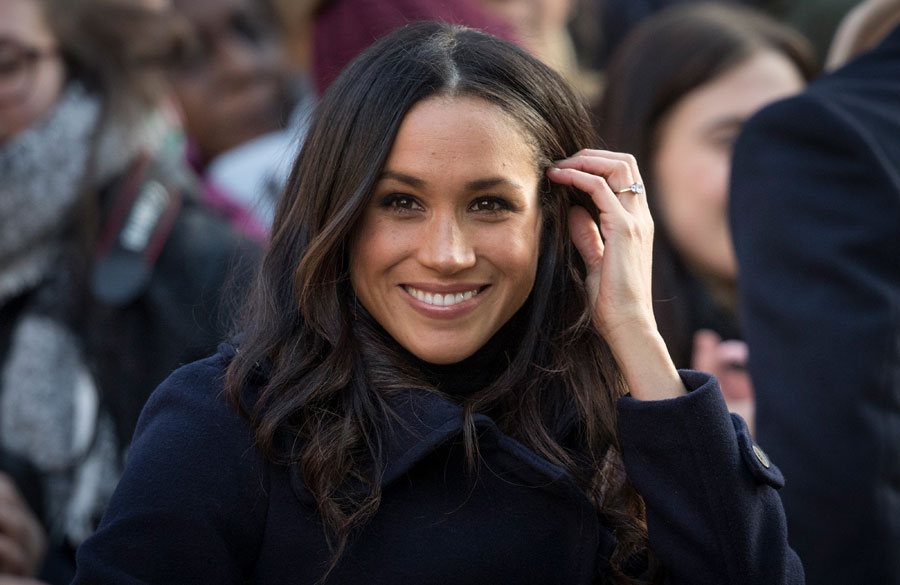 The American actress, who lived in Toronto for seven years, gives her favourite Canadian designers the chance to shine on the world stage.

They’re calling it “the Meghan Effect.”

Much like her future sister-in-law Kate Middleton, Duchess of Cambridge, Meghan Markle now wields considerable power when it comes to influencing style trends — enough power, in fact, to put small Canadian labels on the (fashion) map.

What with all the excitement surrounding the upcoming royal nuptials between Markle and Prince Harry (mark your calendars for May 19, folks!), independent Canadian designers have suddenly found themselves in-demand and thrust onto the world stage.

In a nod to her adopted hometown, for instance, Markle wore a stunning white wrap coat by the Toronto-based brand, LINE the Label, outside Kensington Palace to announce her engagement on Nov. 27, 2017. The now-iconic item sold out online within minutes of her appearance before cameras. With all eyes on Markle, this was undeniably a major “get” for the indie Canadian designer.

“We are incredibly honoured that Meghan chose to wear a LINE coat to mark this very special occasion,” John Muscat, president and co-founder of LINE said in a statement. “We know this particular coat is one of her favourite pieces so we have officially decided to name it ‘the Meghan.'”

Over the years, we’ve watched the Duchess of Cambridge garner praise for her high-fashion ensembles by revered British designers such as Catherine Walker, Monica Vinader and Alexander McQueen. In fact, the Duchess was declared the UK’s most influential style icon in 2016 — and the soon-to-be-royal Markle is now poised to do the same. But will she continue to turn to Canuck labels? After all, she’s a California girl living in London … who really, really loves Canadian brands.

It became increasingly clear that Markle had developed an affinity for Canadian fashion talent during her seven years living in Toronto while filming the legal drama, Suits. After all, how could we forget that the 36-year-old actress released her own clothing collection with Canuck retailer Reitmans in 2015? (For those who actually did forget this little piece of trivia, the commercial below should jog your memory).

But we have to ask: Do Canuck designers have Jessica Mulroney to thank for the Duchess-to-be’s blossoming fashion sense? Markle reportedly forged a close friendship with the fashion and bridal stylist (and daughter-in-law of former prime minister Brian Mulroney) during her years living in Toronto.

“Jessica is very well-connected and savvy, and she knows fashion,” style and fashion editor Jeanne Beker tells the New York Times. “She would tell Sophie [Gregoire-Trudeau] about up-and-coming Canadian designers that Sophie might wear. And she’s certainly helped Meghan.”

With all these Canuck connections (and as a future duchess of the Commonwealth), could a Canadian designer actually land the highly-coveted job of creating the royal wedding gown? Beker, for one, certainly thinks so. “I can see Erdem,” she says, referring to the Montreal-based fashion designer, Erdem Moralioglu. “He’s become a real darling of the fashion media.”

After all, Markle is talented, a humanitarian and, much like her fashion choices, refreshingly accessible — just the way Canadians like their celebrities.

Here, we take a peek at Meghan Markle’s most iconic Canadian fashion moments — so far!

On Dec. 1, 2017, during a charity event in Nottingham to mark World AIDS Day, the newly-engaged Markle steps out for her first official public engagement with Prince Harry wearing an ankle-length double-breasted navy coat with black leather piping by Montreal-based label, Mackage. She paired the stylish coat (which sold out online in minutes) with a black turtleneck, taupe skirt and — in a subtle nod to the tote-carrying Queen, perhaps? — a Strathberry purse.

Save the date! After months of speculation, Markle and her handsome royal (finally!) announce their engagement outside Kensington Palace on Nov. 27, 2017. To mark the occasion, Markle appeared in front of cameras wearing a white wrap coat by Toronto-based brand LINE the Label and 18-karat gold opal studs from Canadian jeweller, Birks. LINE has since named the coat “the Meghan.”

Oh, the controversy! During the Toronto Invictus Games in September 2017, Markle turned more than a few heads in a casual white button-down and — gasp! — ripped jeans by American label, Mother. Sure, she didn’t spotlight a Canadian designer this time around, but this memorable fashion moment (could you imagine the more conservative Duchess of Cambridge appearing in ripped jeans?) still took place in her adopted hometown and had fashion tongues wagging.

While making her first public appearance with Prince Harry — albeit seated a few rows apart — at the opening ceremony of the Invictus Games in Toronto on Sept. 23, 2017, Markle sports a burgundy Mackage biker jacket and co-ordinating dress from Canadian retailer, Aritzia.

On Christmas Day 2017, after enjoying a full English breakfast together, the Royal Family attended the traditional service at St. Mary Magdalene Church. As expected, Markle stole the show, arriving on the arm of her dashing prince and waving to the crowds. Markle dressed for the occasion wearing a knee-length tan-coloured coat by Toronto label Sentaler.

On March 23, 2018, Meghan returned to her Canadian fashion go-to with this stylish coat by Montreal label Mackage. Naturally, it sold out online in minutes.