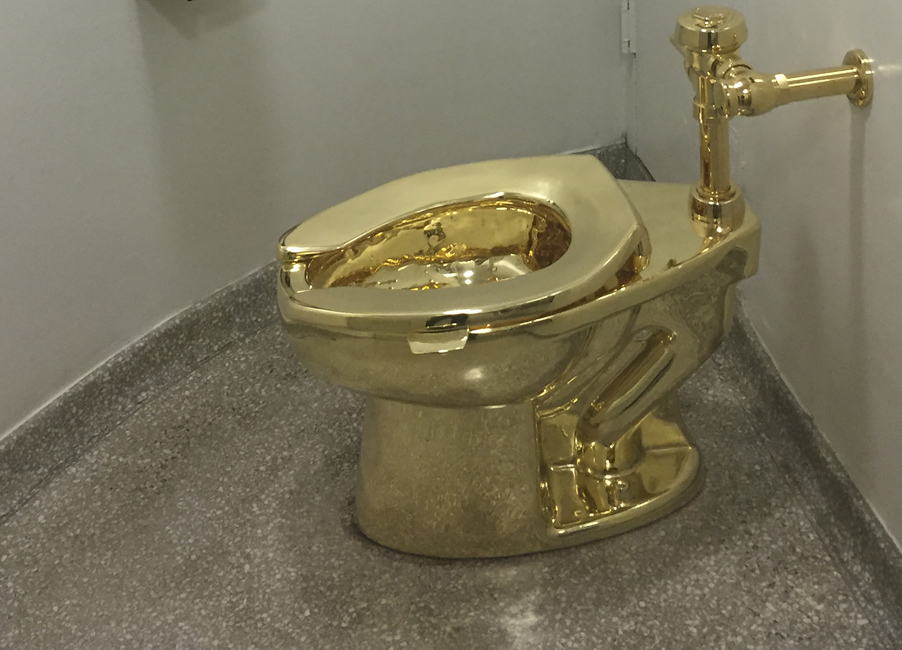 U.S. President Donald Trump wanted a Vincent Van Gogh painting for the White House, but instead received an offer for a far more functional work of art.

What is art, really, when you think about it? Is it a sculpture? Or perhaps a painting? Yes, a painting, like the watercolour Vincent van Gogh painted in 1888 in which a man walks his dog through a snowy rural setting. It’s called Landscape with Snow and it resides, quite permanently as it turns out, at the famed Guggenheim Museum in New York.

Van Gogh’s work has, of course, attracted many admirers over the years, and one of those admirers is none other than U.S. President Donald Trump. It’s a surprising fact given the painting doesn’t boast any of the qualities that Trump usually seeks out:

1) It’s not gilded.
2) It’s not decades younger than him and competing in a beauty pageant.
3) The hat the man in the painting is wearing isn’t emblazoned with the acronym “MAGA”.

Still, the president is a fan. So much so, in fact, that he asked the Guggenheim if they could send it on over to the White House, for he and First Lady Melania Trump to admire in their personal quarters. As The Washington Post reports, it’s not unusual for presidents to ask for art on loan to stick on the wall next to portraits of Washington and Lincoln. In this case, however, Guggenheim curator Nancy Spector declined the presidential request, instead offering Trump a toilet.

Let’s be clear: this isn’t any toilet. The Post, in fact, described it as “an 18-karat, fully functioning, solid gold toilet — an interactive work titled ‘America’ that critics have described as pointed satire aimed at the excess of wealth in this country.” Talk about a lavish loo. And, in fairness, the president has reportedly been blabbing a lot about “sh*tholes” recently so…

The “America” work was created by artist Maurizio Cattelan and was actually used as a functioning toilet at the museum for a time, which makes this one fine bit of “toilet trolling” by a curator who is reportedly known for being an outspoken critic of the president.

Of course, Spector may simply have offered the toilet because she’s familiar with Trump’s penchant for putting gold on various items around his luxury homes. Or perhaps Spector recalls the story of how Trump is said to have insisted that a Renoir painting hanging on his private plane was real (despite the real one residing at the Art Institute of Chicago), or the other time when, well, Time magazine asked him to remove fake cover shots of him that he’d had framed and hung on the walls of his golf clubhouses.

The toilet is a funny jab at the president, but given his propensity for focussing most of his time and energy on cable news and Twitter – which he uses to tweet about cable news – the Guggenheim could have probably just sent over any old painting and told him it was a Van Gogh. Would he really have known the difference?

Or, if they wanted to make an even more bold political statement, perhaps they could have sent a painting that reflects Trump’s presidential policies, like attempted legislative overhauls that would have robbed millions of Americans of much-needed healthcare. Massacre of the Innocents comes to mind.

But hey, I don’t know art. I just know what I like.