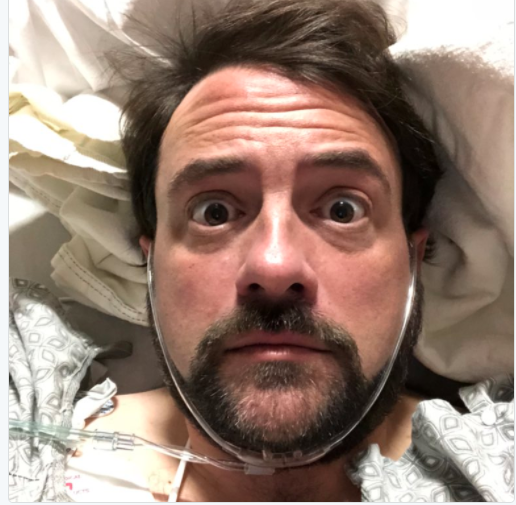 Step aside Baby Boomer’s, Generation X is ready to make its mark in ways it really didn’t want to. Turns out the Boomer Generation hasn’t cornered the market on aging and age-related health issues.

In case you’re scratching your head about just who Gen X is – we’re the demographic cohort smack up against Boomers and those annoying Millenials – in other words we’re the ignored middle child.

And Kevin Smith is one of our poster boys. Yesterday, at the ripe young age of 47, he suffered a massive heart attack after performing at a Los Angeles comedy show. See Smith’s tweet below. Smith has battled with weight for years and lost an astounding 85 pounds after been removed from a flight because he was too large for a seat! He lost the weight gradually between 2010 and 2015.

Smith shot to fame with the premiere of his 1994 debut film Clerks, which made him an indie sensation for its wry humour and shoestring budget. He’s made other films since then including, Clerks 2, Mallrats and Chasing Amy, but it is his character of Silent Bob (played by Smith himself) that has become a Gen X legend.  With his partner in crime, Jay, (the duo sell pot outside the convenience store featured in Clerks), Silent Bob smokes too much, wears a backwards baseball cap and a long coat and says very little, but when he does speak, it’s usually the most intelligent words spoken for miles, serving up sage wisdom in monologues to other characters in dire need of advice.

Looks like Smith needs the wisdom of Silent Bob now, because no matter how young or old, how famous or not, , a heart attack is terrifying. In his Facebook post since the incident, Smith reveals how it all went down. Smith’s heart attack is a wake up call to anyone in Generation X  that we are not immune. We too, have grown older and our bodies are feeling it. We wish Kevin Smith and his alter ego Silent Bob a speedy recovery, there’s no slacking off now!