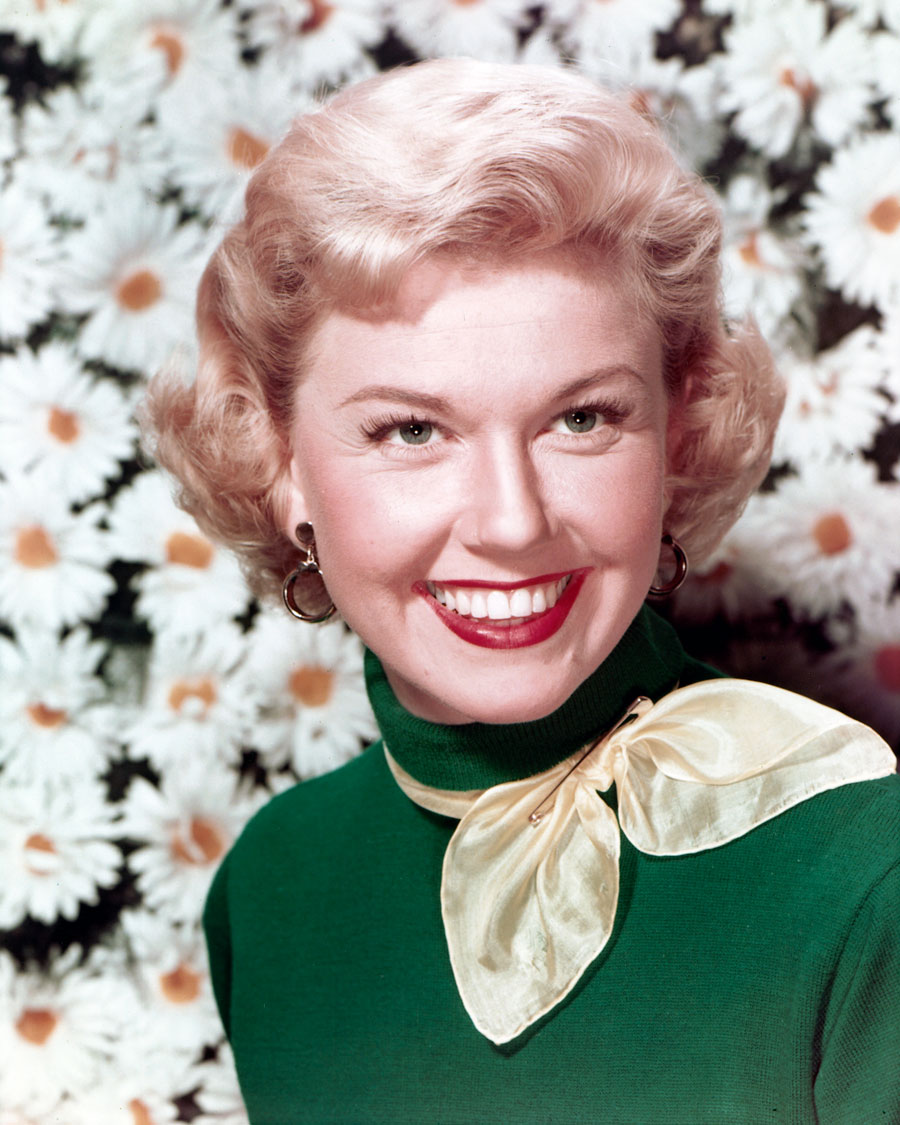 Doris Day, the American actress known as the girl next door who was also one of Hollywood’s biggest female box office stars of her era.

Beginning in 1948 with Michael Curtiz’s Romance on the High Seas, the singing and dancing Oscar-nominated actress appeared in 42 films—like The Man Who Knew Too Much, That Touch of Mink, The Pajama Game, Calamity Jane and Pillow Talk. Known for her plucky, resourceful and upbeat characters, Day had memorable pairings with Jimmy Stewart, Cary Grant, James Garner and Rock Hudson as well as her own eponymous television series on CBS from 1968-1973. The charismatic star was born Doris Mary Kappelhoff in Cincinnati, Ohio in 1922 and will be celebrating her 96th birthday on April 3. We know that’s the correct number now because last year, her original birth certificate was discovered and Day learned she was two years older than she’d previously thought.

Age is just a number—but it’s a great excuse for Day’s devoted fans throw a party.

Over Easter weekend, several hundred Doris Day fans will converge on Carmel-by-the-Sea, the picturesque northern California town where the star retired to devote herself to animal welfare.  As Hollywood’s foremost animal rights activist dating back to the 1950s, stray dogs were routinely left at her gate (it earned Day the affectionate monicker ‘the Dog Catcher of Beverly Hills’).

The fundraising weekend has its grassroots in the early 2000s, when groups of fans would informally visit Carmel in the spring to mark her birthday. The first ‘official’ Doris Day’s Birthday Event in 2014 was more elaborate and has grown into a three-day weekend fundraiser that now organized by the Doris Day Animal Foundation (DDAF), the charitable organization she founded in 1978.  Since 2014, a more elaborate birthday party has been organized became an ingenious way to thrill fans while channeling their appreciation into meaningful charitable work.

Fans from across the U.S. and Canada and as far away as Australia, Germany and England now make the annual pilgrimage to Carmel, with all proceeds from the weekend entertainment, Q&A events and memorabilia auctions going to the DDAF. Participating hotels like the Cypress Inn, the historic Carmel boutique hotel Day and her late son Terry Melcher bought and made pet-friendly, also donate part of their proceeds.

All though more than 300 are expected to attend, the celebration still feels intimate. Thursday night, for example, the festivities kick off with a Day-themed bingo night lead by fans, and the weekend culminates Saturday night in the fiftieth anniversary screening of Day’s final film With Six You Get Eggroll (1968) with a few of the cast (like John Findlater and Jimmy Bracken) in attendance to share behind-the-scenes anecdotes.

It could just be coincidence, but one regular attendee and volunteer, actor Scott Dreier (image below), was born the very same week Day’s last movie came out. After watching his first Day movie on TV as a child, he became a lifelong superfan. “She had a real heart and presence and she felt different to me,” he recalls. “I never feel like I’m watching an actor in a performance.” “I always joke that I am nutso for Doris Day, but we also lead normal lives,” Dreier admits with a laugh, before growing serious. “She profoundly changed the course of my life,” he says. “I’m a better person, a better artist and animal lover, and I’ve been able to do something on a grander scale for my love of animals because of her inspiration.” He recently compiled the interview documentary “Celebrating Doris” (now available through the ddaf.org shop) so that people remember her work for generations and decades.

Dreier is among the small but indefatigable volunteer team (just four people!) who organize the Birthday Event. It includes wrangling former Day co-stars like Bernie Kopell (a regular on The Doris Day Show and later known as ‘Doc’ on The Love Boat) and Phillip Brown (her son on the show) as guests and helping round up auction items. One past auction item of Norman Jewison’s The Thrill of it All movie poster signed by Day and screenwriter Carl Reiner raised US$4,000; the current auction boasts rare memorabilia signed by former co-stars and celebrities, like friend (and Carmel neighbour) Clint Eastwood.

Dreier’s organizational duties come in addition to performing over the course of the weekend from one of his musical passion projects inspired by Day’s recording career (she recorded over a thousand songs). “I truly cannot name another singer from that time period that you feel her heartbreak, her happiness and joy, and everything because of the intimacy she allows you to see,” Dreier says. In past years he performed his popular one-man show Doris and Me. “Talk about surreal! That was probably the most nervous that I have ever been” Dreier recalls. “I’m telling my story but doing it at the birthday I’m telling this story for all of us that’s about all of us.”

This year’s entertainment will include selections from Dreier’s recent The Doris Day Project tribute album, including a cover of “Everybody Loves a Lover” recorded as a duet with Jane Monheit and a 16-piece band. He’ll soon be back in studio recording a Volume 2 of novelty songs like “Why Did I Tell You I Was Going to Shanghai” and “Perhaps Perhaps Perhaps.”  and to narrow down the setlist Dreier solicited suggestions from fellow devotees, even running Facebook polls to unearth unexpected favourites.

“It’s Comic-Con but for Doris Day” Dreier adds. “And it’s really so loving. You get swept up into it.”

Jackie Joseph, another frequent Birthday Event guest, agrees. The actress worked with Day on several projects, including The Doris Day Show and With Six You Get Eggroll. “There’s a mystical magic among the fans,” Joseph says. “They’re so welcoming and so genuinely happy to see you. It’s a special kind of energy that can’t be bought in the drug store. It’s just such a sincere passion.” Her other credits range from The Andy Griffith Show, The Dick Van Dyke Show and the voice of Melody in Josie and the Pussycats to Roger Corman’s Little Shop of Horrors, Designing Women and Gremlins.

Thanks to her roles in those iconic films and series, Joseph, now 84, enjoys what she calls three distinct ‘slices’ of fans and attempts to explain what it is about Day that makes her devotees especially ardent. “When it comes to the Doris fans, they’re like a big giant puzzle of the Great Lakes of Love. They each seem to have received—it’s almost ethereal—a special light in their life from watching Doris in the movies. Now as time has progressed,” she adds, “it’s almost a mission to let her know what she has done for them.”

The main way they do that is supporting the cause closest to Day’s heart.

According to spokeswoman Lea Price, the DDAF’s director of communications, last year’s birthday celebrations raised approximately $80,000 for the DDAF. They hope to better that this year — between the recent devastating hurricanes and California wildfires, much of DDAF’s focus over the past few months has been on emergency disaster relief for animals in the affected areas. “We have provided a number of grants to organizations that have directly rescued, taken care of and reunited or re-homed the displaced animals—and that work still continues,” Price says. “We continue to fund major initiatives such as spay/neuter (most notably, the annual World Spay Day founded by Doris Day and the Doris Day Animal League in 1995, the Duffy Day Life Saving Program (giving a second chance to physically or socially disadvantaged pets that might otherwise be euthanized); the Doris Day/Terry Melcher Scholarship at UC Davis School of Veterinary Medicine supporting students studying shelter medicine.” Many of these heartwarming stories—from horse rescues to seniors for seniors citizens’ adoptable older dogs program—are on the DDAF Facebook page. Day with one of her dogs at a press conference at the dog friendly hotel she owns in Carmel, California in 1985 ( Photo by Paul Harris/Getty Images )

Day’s signature renditions of songs like “Que Sera, Sera” have been in countless film soundtracks since she made her last movie in 1968 but at 95, Day no longer performs or makes official public appearances; she issues statements rather than grant interviews and completely devotes her energies to animal welfare. But she did make an impromptu cameo at the very first Birthday Event. “When Doris surprised everyone by deciding to attend at the last minute, the reaction in the room was akin to The Beatles on the Ed Sullivan Show,” Price says. “I wanted to thank everyone personally,” Day said at the time, and she did by meeting and posing for photos with every last fan.

That first official celebration was meant to be a one-time party, Price explains, “but the tremendous response and anticipation for future events prompted DDAF to make Doris Day’s Birthday Event an annual celebration, while raising money to help animals and the people who love them.”

Day does not attend the now-annual event. On subsequent birthdays, however, she has been known to make an appearance on the balcony of her Carmel home and offer a grateful, happy wave to the fans who gather below and sing her Happy Birthday. And then she gets back to her dogs.

Fans are encouraged to sign Doris Day’s birthday e-card online at DDAF, where they can also shop fundraising products and donate directly to the Doris Day Animal Foundation in her honour; visit www.ddaf.org