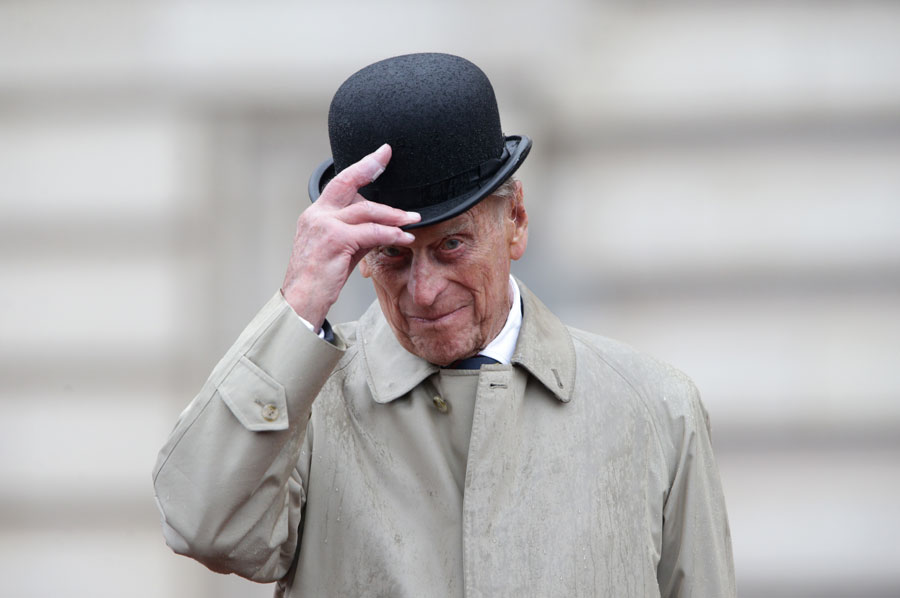 Prince Philip, Duke of Edinburgh, turns 97 on June 10, making him the oldest-ever male member of the British Royal Family.

However, he hasn’t let age slow him down: Up until his retirement from official royal duties last August, the prince carried out more public engagements than Princes William and Harry and the Duchess of Cambridge — combined!

Born in Corfu in 1921, Philip was a member of both Greek and Danish royal families. When his family was exiled from Greece while still an infant, Philip joined the British Royal Navy in 1939 at the age of 18. That same year, he started a correspondence with the then 13-year-old Princess Elizabeth. It wasn’t until after the war, however, that Philip was granted permission from King George VI to ask for Elizabeth’s hand in marriage. They married on November 20, 1947.

Four children, eight grandchildren and six great-grandchildren later — and patron of more than 800 organizations — Prince Philip has endeared himself to the public and made a name for himself outside that of “the Queen’s husband.” But he readily admits that he always knows where his priorities lie.

As he once told reporters: “My job first, second and last is never to let the Queen down.”

Thus far, 2018 has shaped up to be a relatively low-key year for the duke. Spotted out in public only on rare occasions (with the exception of a certain Royal Wedding), he’s no doubt kicking his feet up and enjoying some downtime with the family — including newest great-grandson Prince Louis.

But who could forget his most recent appearance at the Royal Wedding between Prince Harry and Meghan Markle on May 19? Only weeks after undergoing scheduled hip surgery, the royal looked dapper as ever as he watched his grandson get married at St. George’s Chapel in Windsor.

In honour of his birthday, we revisit some of his personal and career highlights.

“Philip’s unwavering sense of duty has kept him at the Queen’s side through nearly 70 years of marriage. He’s always been there in the background, and that has been his raison d’être — to know his place, which has been two paces behind Her Majesty. On the occasion of his 90th birthday, he gave a rare interview to the BBC. The reporter talked about how Prince Philip was a child of divorce at the age of 10, with his father moving to Monte Carlo, his mother gone to live in a sanatorium, his four sisters married and moved to Germany, and him, penniless, sent to his grandmother in England. The press have long tried to use this lonely upbringing as a way to explain his irascible character. When asked about his peripatetic childhood, he seemed aghast. ‘I just lived my life. I haven’t been trying to psychoanalyze myself the whole time.'” Prince Philip: A Man of (Many) Letters

“With KG KT PC OM GBE AC ONZ QSO GCL CC CMM PC(Can) AdC(P) trailing his already lengthy title, Prince Philip might not even himself remember what they all stand for. Let’s help him out…”

The Royal Secrets to Longevity

“Researchers say we accelerate the aging process if we smoke, eat poorly, drink heavily, don’t exercise and are overstressed. Successful aging is measured in both quantity of years and quality of life — not simply breathing but retaining vitality and enthusiasm, enough to make life well worth living. “In the letter, she wrote: ‘The first time I remember meeting Philip was at the Royal Naval College, Dartmouth, in July 1939, just before the war. (We may have met before at the coronation or the Duchess of Kent’s wedding, but I don’t remember).

‘I was 13 years of age and he was 18 and a cadet just due to leave. He joined the Navy at the outbreak of war, and I only saw him very occasionally when he was on leave — I suppose about twice in three years.

‘Then when his uncle and aunt, Lord and Lady Mountbatten, were away he spent various weekends away with us at Windsor. Then he went to the Pacific and Far East for two years.’

The note is just one piece of royal memorabilia up for auction at Chippenham Auction Rooms in Wiltshire, England on April 23, 2016.” Back in 2013, the Duke of Edinburgh, was in Toronto for a “private working visit”— sans the Queen! — to commemorate the 200th anniversary of the Battle of York.