Despite Rampant Rumours of Retirement, Vogue’s Anna Wintour Keeps Her Stilettos On 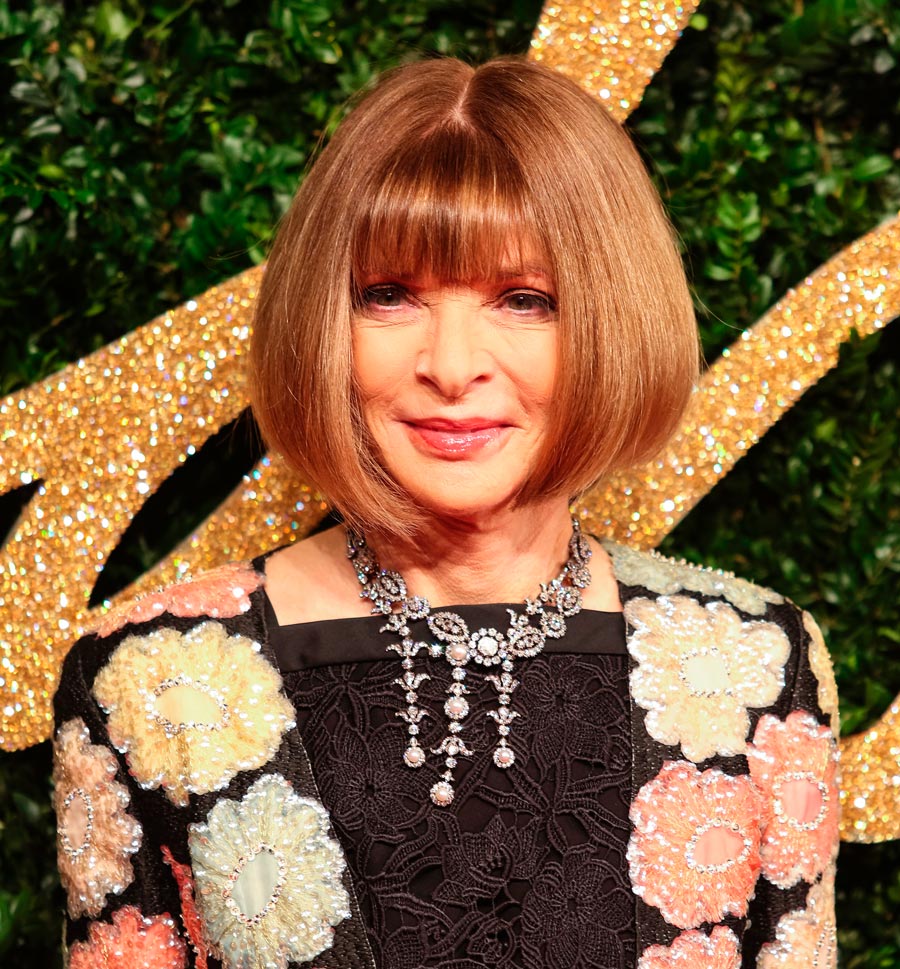 When rumours of retirement are greatly exaggerated, it raises the question, “Should I stay or should I go?”

The year that Anna Wintour became editor-in-chief of Vogue, the late, great Stephen Hawking published A Brief History of Time.

If that isn’t a cosmic memento — as Wintour marks her 30th remarkable year as head chieftess of the fashion world’s bible — then what, pray tell, is?

Other things that happened back in 1988: George H.W. Bush beat Michael Dukakis in the U.S. presidential sweepstakes, the movie Rain Man swept into theatres and Bobby McFerrin mirthfully set forth the advice, “Don’t Worry, Be Happy.” For Canadians it was the dark moment in our history when Wayne Gretzky was traded to the Los Angeles Kings.

The sheer staying power of Wintour — “she does not put a finger to the wind to judge trends; she is the wind,” as David Carr once described it in the New York Times — is so acute, i.e., that the mere rumour of her leaving her post last spring sent shockwaves, unsurprisingly, through the Twitterverse.

But then, just as quickly, arrived a philosophical shrug, at least from some quarters: wasn’t it … well … perhaps … time?

In addition to it spurring an existential conversation about swan songs and exit ramps, the main calculus that leapt into people’s minds was this: what else is left for someone like a Wintour to do, anyway? Beyond having long exercised her own “gravitational force field,” as fashion critic Vanessa Friedman has written — “magnetized by strategically deployed invitations, introductions, magazine features and messages of support” in all the visible/invisible ways she influences what we see and perceive. And she is not only an axis point in the Hollywood-sports-fashion ecosystem, has had her name itself splashed on a wing at the Metropolitan Museum of Art (based on her mega-choreography of the annual Met Gala) but is, moreover, forever entrenched in the ducts of pop culture, courtesy of the hocus-pocus-ery of Meryl Streep in The Devil Wears Prada.

To go or not to go: that is often the question for anyone in a big career, a prominent post but accentuated even further when the klieg lights of fame come into the equation. I like to think of it as a choice between either the Margaret Mitchell model or the Robert Mugabe model. Stay with me now.

The former is an archetype personified by the woman who only published one novel in her lifetime — but what a novel it was. Eighty-two years hence, her Gone with the Wind remains not only one of the most iconic pieces of Americana ever put to print, but it’s one that also inspired one of cinema’s most beloved films, too. Once Mitchell did it, she did it, in other words. Never outstayed her welcome. Never attempted to outdo herself. Only sustained more durability via the halo of her mystique.

Mugabe, on the hand, sits on the other side of the ledger: holding onto power in the African nation of Zimbabwe for an astonishing 37 years, making him one of the longest serving world leaders in history. His image effectively has gone from that of an African independence hero to one of an authoritarian tyrant — time finally caught up with him last year when he was ousted by his own military in what was essentially a bloodless coup. Ninety-three years old then and a state pariah, he’d become a primo example of having outstayed one’s welcome.

Be more Mitchell than Mugabe, one would like to humbly suggest.

It’s a lesson that Rudolph Giuliani, the erstwhile mayor of New York City, could have absorbed better when he returned to the spotlight a few months back as Donald Trump’s personal lawyer — hitting the airwaves with such a vengeance it almost seemed like a Season 1 character out of the never-ending Trump reality show, returning hungrily for a Season 2 arc. There might have been a price to pay for his scalding-hot rhetoric while making his media rounds, however, as exemplified by the very specific reaction he got when he attended a Yankees game on his birthday this year: the man once lauded as “America’s mayor” for his handling of 9/11 was the object of a wide chorus of boos from the New Yorkers in the stands.

Clinging to the limelight can clearly have its complications. Knowing when to enter and when to vamoose, among other things.

Closer to home, here in Canada, billionaire W. Galen Weston settled on a sunset strategy that struck a note bordering on the poignant. Giving up his post as executive chairman of George Weston Ltd., the mega-food processing and distribution company founded by his grandfather in 1882, at precisely the age of 75 in 2016, he said in a statement: “Following my own father’s tradition of stepping down at the age of 75, I see this as a good time to create space for the next generation.”

Indeed, his son, Galen Jr., promptly took his place in the position.

The subject of business hand-me-downs is such a ripe one for our times that it even informs the shrewd new HBO series, Succession. The story of a powerful media baron whose children jockey for control of the empire (even as he resists), it owes its narrative DNA to a very specific clan: several years ago, co-creator Jesse Armstrong wrote a screenplay titled Murdoch that imagined mogul Rupert Murdoch’s family gathering for his 78th birthday. The screenplay made the rounds in Hollywood but was never produced.

Explained fellow exec producer Adam Mackay to Variety, “ What excited me about Jesse’s script is that it wasn’t about one family. It’s more about the question of what happens when this kind of power is handed down through bloodlines. How does that affect the world around it?”

A scene that crystallizes the generational ooze in Succession is one that happens in Episode 5 of the show when during a business meeting, the mogul played by Brian Cox, blurts out, “Why shouldn’t we do all the news?” to which his children use the opportunity to question his judgment. One of his sons even joking calls him “Kim Jong-Pop,” suggesting it might be unwise to seek a monopoly on content in the age of the digital age. At the same meeting, their father fails to stop pouring a cup of coffee — a moment that not only works as metaphor but is also a suggestion that he might be suffering from dementia.

Back in the all-too-real circles of high fashion, none other than Carolina Herrera stepped down after nearly 40 years at the helm of her eponymous label, following a show held in New York just this past February. As of that moment, she was slipping into a new job in her company as global brand ambassador, clearing the way for a protégé, Wes Gordon, to step into the shoes of creative director.

“Just don’t say I am retiring,” the 79-year-old insisted at the time, with a dismissive wave, adding, “I am not retiring! I am moving forward.”

That’s at the nucleus of it all, isn’t it? Vivian Diller, a renowned psychologist who has written on the subject of aging and careers, perhaps put it best when she wrote: “As we are living longer lives, eager to remain vital and active well into our 70s, 80s and even 90s, we also have to learn how to let go. We have to know when it’s time to mourn the loss of who we once were. We have to let go of aspects of our identities tied to our youth to make room for others to develop. If we learn to move on, we can pass the torch to the next generation yet stay involved and engaged in ways that have meaning for the rest of our lives.”

The more I think about it, the only way to leave a post with any real elegance, I think, might be to take inspiration from the “French exit,” otherwise known as the “Irish goodbye” — two different terms riffing on the same time-honoured concept of leaving a social gathering without going through the rigmarole of bidding farewell. “One moment you’re at the bar or the house party or the Sunday morning wedding brunch,” as a primer in Slate once extrapolated, “the next moment you’re gone. In the manner of a ghost. ‘Where’d he go?’ your friends might wonder. But — and this is key — they probably won’t even notice that you’ve left.”

While some might deem this practice as somewhat rude, the writer at Slate argued, “Is it really so bad to bounce without fanfare? We all agree it’s fun to say hello. A hello has the bright promise of a beginning. It’s the perfect occasion to express your genuine pleasure at a friend’s arrival. But who among us enjoys saying goodbye? … Goodbyes are, by their very nature, at least a mild bummer. They represent the waning of an evening or event. By the time we get to them … these sorts of goodbyes inevitably devolve into awkward small talk that lasts too long and then peters out. We vow vaguely to meet again, then linger for a moment, thinking of something else we might say before the whole exchange fizzles and we shuffle apart …”

Using a party as metaphor, why not just see to one’s leave without going through the lugubrious kabuki of goodbye?

Because, as the Wintours of this world know all too well, a last impression can be just as important as a first.

A version of this story appeared in the Sept. 2018 issue of Zoomer magazine with the headline “A Wintour’s Tale”, pg. 54.