Queen Elizabeth, 92, Takes a Royal Trot Around the Park 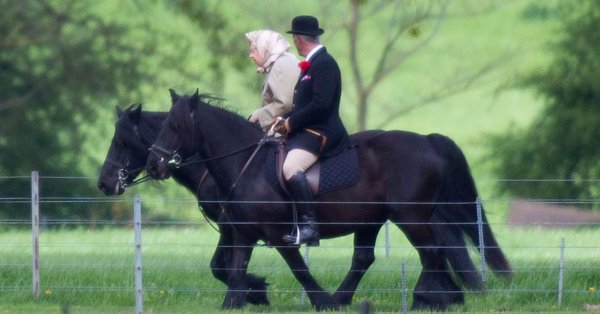 Avid royal watchers around Windsor Castle today – especially the horse aficionados – were thrilled at the sight of two black Fell ponies, one ridden by a bowler-hatted groom and the other by the Commonwealth’s rider-in-chief, 92-year-old Queen Elizabeth. Three vivid red poppies secured to the bridle of Her Majesty’s mount paid homage to the many who sacrificed their lives for our freedom, a commemoration each November that originally began in response to the horrific losses of the First World War. This year marks the 100th anniversary of the Armistice that ended that Great War, so awful it was thought to be the “war to end all wars.”

Younger subjects might be surprised to learn Elizabeth herself served as a truck mechanic, as a member of the Women’s Auxiliary Territorial Service, during the Second World War. No wonder she continues to fearlessly zip around the royal estates in a Range Rover. Horses, and riding them, have been a lifelong passion for her. Today she wore sunglasses, a navy jacket and her usual headscarf. (Isn’t it time, your Majesty, to try out a royal helmet? But then, it would play havoc with the hair.)

Prince Philip, 97, took his team of two Fell ponies for a spin around the castle this morning as well. (Fell ponies, native to the north of England, are sure-footed and have steady temperaments. They are often black and have “feathery” heels.) He’s an expert driver and had a couple of stable hands behind him in the carriage. According to the Daily Mail, he retired from polo at age 50 and decided that since he had horses and carriages, he’d give driving a go, so much so that he helped set up international rules for carriage racing. After a rather rough and tumble but fun-filled career of competitive driving, to say nothing of a hip replacement last year, he’s taking it a bit easier, enjoying his ponies – at least that’s what his passengers in the back are hoping.