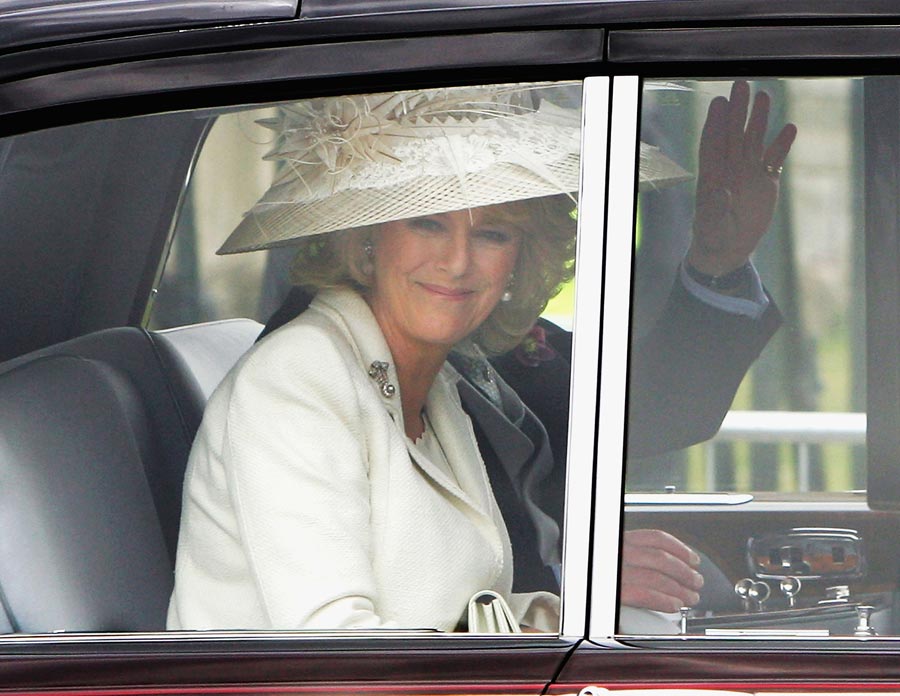 The Prince of Wales and The Duchess of Cornwall are driven from Windsor Guildhall after being married on April 9, 2005 in Windsor, England. The couple married in a civil ceremony at Windsor Guildhall, before a church blessing at Windsor Castle. (Photo by Scott Barbour/Getty Images)

She was perhaps one of the modern world’s most famous sidepiece.

When Camilla Parker Bowles’ affair with Prince Charles was made public back in the 1990s, she was thrust into the international limelight. It was a scorching situation for her since she was a married woman with children and Charles was married to Diana, a woman adored by the British public and the world at large.

Adding to the public humiliation, a tape of a particularly lurid telephone conversation between the lovers was leaked to the press.

The fallout that ensued upended Camilla’s marriage while Charles publicly acknowledged the affair on national television. Camilla was painted by a hostile public — and the media — as ugly, frumpy and unglamorous. Even Queen Elizabeth II declared her a “wicked, wicked woman.”

Yet, despite the fractured “fairy tale” marriage of Prince Charles and Princess Diana, who would have imagined — even for a moment — that Camilla, the vilified older woman, would be the one to emerge from the muck, sanity intact, head held high and victorious?

Things rarely ever work out for the modern day sidepiece. In most cases they are dumped after falling out of favour. Yet, against all odds, Camilla went from mistress to home-wrecker to winning over public favour as the second wife of Prince Charles, a man she waited more than 40 years to marry.

Even in her wildest dreams, it’s unlikely even she could have possibly imagined this outcome.

When Camilla first met Charles back in the early 1970s, she was 24 and a little over a year older than him. It has been said that she wasted no time pointing out the historical fact that her great-grandmother, Alice Keppel, was the mistress of King Edward VII, who was Charles’ great-great-grandfather.

While the two did embark on a romantic relationship, Camilla was deemed unsuitable for Charles and they both went on to marry other people. Despite the risk of scandal involved, they continued the romantic liaison.

But imagine being Camilla and having to watch the man you love, marry a much younger and beautiful woman in a lavish televised event. Or having to read the fawning press coverage on Charles’ gamine new wife. Or having to witness the utter adoration the world heaped on her throughout her life — and even after her death.

While Camilla might have played the role of secret mistress, she knew she could never possibly compete with Diana. She would forever be the understudy to the star attraction in this royal opera.

But then she must have felt a flicker of hope in 1996 when the unthinkable happened — Charles and Diana divorced.

Camilla at that point was divorced from her husband and might have entertained the idea she’d finally have Charles to herself, despite the cold rejection from the Queen and the nation.

In his book, Game of Crowns, author Christopher Andersen wrote that Camilla enlisted media strategists to learn about how to win over the public.

While a plan was laid out and Camilla set about to work at it, tragedy struck in 1997 with the death of Diana.

While the world went into shock and the outpouring of grief practically canonized Diana, Camilla must have thought, “Even in death, I can’t beat this woman.”

But slowly, over the ensuing years and with very carefully orchestrated public appearances, Charles and Camilla sold the idea that they were very much in love.

Eventually winning over his mother — allegedly with the promise he would not make Camilla his queen when he succeeds the throne — Charles finally married Camilla.

So, as they celebrate their 14th wedding anniversary (April 9, 2019), we raise a special toast to Camilla, Duchess of Cornwall, a woman of considerable spirit and stiff upper lip, who went from royal mistress to woman universally scorned to wife of a future king.