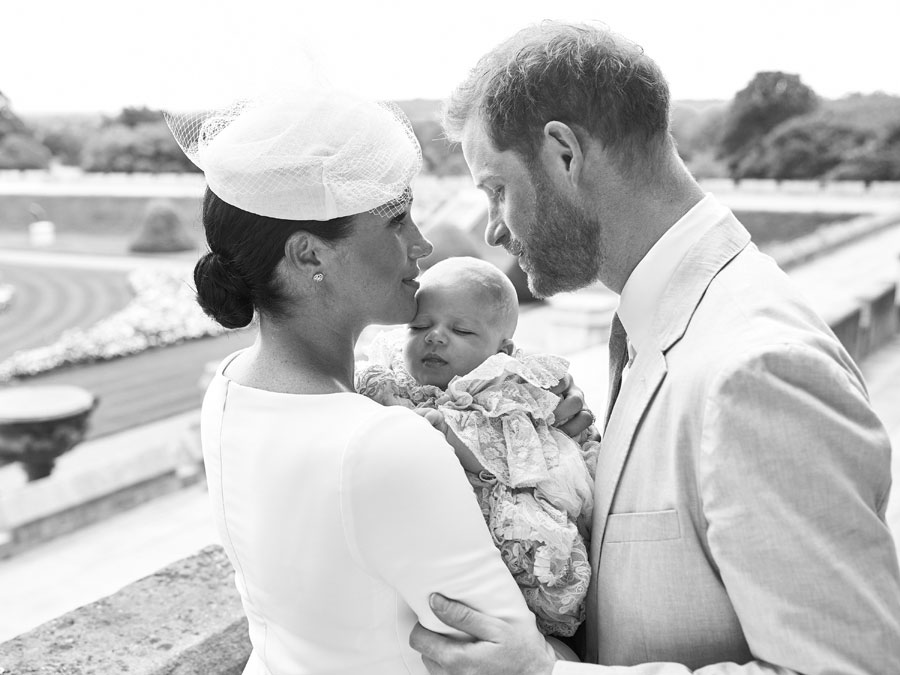 Prince Harry and his wife Meghan had their baby son Archie christened on Saturday at a private ceremony. (Photo by Chris ALLERTON / SUSSEXROYAL / AFP)

On Sunday, Prince Harry turned 35, celebrating his first birthday as a father! To mark the occasion Meghan, Duchess of Sussex shared a sweet birthday tribute on Instagram, which included a collage of photos of Prince Harry from when he was a wee tot being carried in the arms of his mother, Diana, to a previously unseen photo of the birthday boy with his own son, baby Archie, on his christening day earlier this summer. In the picture (below), the doting father is seen kneeling down to look at his son, who is on his mother’s lap. Other royal tributes included birthday wishes from Prince William and Kate Middleton, as well as Harry’s father, Prince Charles and his step-mother Camilla, Duchess of Cornwall, and the Royal Family Instagram account which represents Queen Elizabeth and other members of the family. “Wishing a very happy birthday to The Duke of Sussex today! 🎂” read a message shared on the joint account of the Duke and Duchess of Cambridge, which was posted alongside an adorable photograph of the two brothers smiling at one another. And  Prince Charles and Camilla, the Duchess of Cornwall, shared a photo of Harry with Charles, that said, “Wishing a very Happy Birthday to The Duke of Sussex, who turns 35 today! #HappyBirthdayHRH 🎂📸 Chris Jackson Getty / PA.” And here, from the official royal family Instagram account is a photo of Harry with his grandmother, Queen Elizabeth. The post reads, “Happy Birthday to The Duke of Sussex – 35 today! #HappyBirthdayHRH 🎉 📸 Press Association.”

In honour of Harry’s 35th birthday, we decided to revisit some of our own favourite photos of the cheeky royal through the years.

We may as well start with this gem of a photo from 1988 when the pint-sized royal drew laughs for his tongue-out pose during the annual Trooping of the Colour. If nothing else, it proved to be one of the earliest examples of the spunky, fun-loving personality of the young prince. Although, his mum, Diana, Princess of Wales, didn’t appear all too impressed with his behaviour.

OK, so Harry isn’t exactly the focal point in this snap, but it’s just such a sweet photo of his mum running towards him and older brother, William, that we couldn’t resist including it — and it was taken in Toronto! The young princes had just arrived on the deck of the yacht Britannia when they joined their parents on an official visit to Canada in October 1991.

This one is a personal fave: Her Majesty is positively beaming as she inspects the soldiers — including her grandson — at the Sovereign’s Parade at Sandhurst Military Academy in 2006. Even Harry can barely suppress a grin.

A royal affair: Harry stepped up as his big brother’s best man for the April 2011 nuptials of Prince William and Kate Middleton. Paired with the bride’s younger sister, Pippa, Harry no doubt proved a comfort to his sibling on his big day.

In 2012, Harry challenged Olympian Usain Bolt to a race at the Usain Bolt Track at the University of the West Indies in Kingston, Jamaica. Despite a valiant effort, the royal was no match for the King of the Track.

Tag, you’re it! The sporty prince enjoys an energetic game of tag rugby with kids at Kings Park Stadium in Durban, South Africa in December 2015. Some of Harry’s best photo ops have featured him interacting with kids and babies. Case in point …

Even before becoming a father himself, there’s no denying the prince is a natural with the wee ones. This adorable snap from 2015 went viral — and for good reason. The royal charmingly mirrored a baby’s gummy grin during a visit to Christchurch, New Zealand.

During the 2017 Invictus Games in Toronto (and only days after he made his official public debut with Meghan Markle), Harry got in a playful scuffle with a young toddler who expressed more than a passing interest in the royal’s box of popcorn. The photos and accompanying video went viral — and millions of people around the world swooned.

The look of love: It was the engagement that rocked the world. In November 2017, on the grounds of Kensington Palace, Harry and American actress Meghan Markle confirmed what we all already knew — that the high-profile couple — humanitarians at heart — were meant for one another.

The handsome groom: It feels like he grew up before our eyes, doesn’t it? A visibly over-the-moon Harry exchanged “I do’s” with his beautiful bride, Meghan Markle, at St. George’s Chapel in Windsor on May 19.