Why It Matters That Willam, Kate, Harry and Meghan Reunited to Support World Mental Health Week 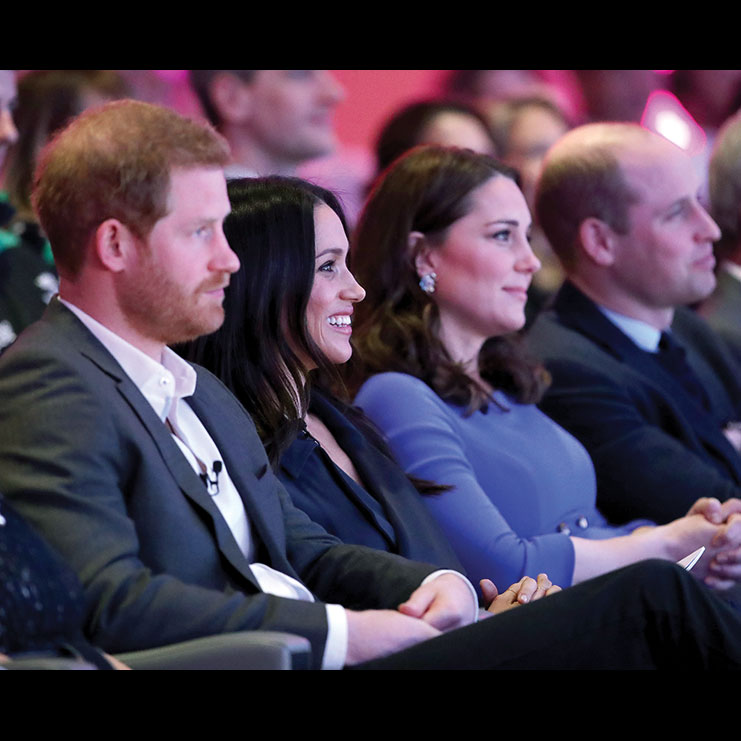 Today marks the end of Mental Health Awareness Week in Canada. We are taking this opportunity to reflect on how two bereaved young princes, who lost their mother at such tender ages, have led the way in mental health awareness. Prince William was 15 and Prince Harry was just 12 when Diana, Princess of Wales,  died in a Paris car crash in 1997.

The brothers suffered alone in silence, behind the palace gates, for decades. When they first took on the issue of mental health, the hidden illness was shrouded in stigma. The HeadsTogether campaign the brothers spearheaded, was launched along with William’s wife, Kate, in the spring of 2016, with the aim of bringing awareness to mental health issues, reducing stigma and connecting people with resources in the sector.

They made the initiative matter by doing something remarkable for the Royal family, who are traditionally the stiffest upper lips in a country that prizes stoicism. The princes, ushering in a new millennial attitude to royal charity work utilizing social media and video messaging, spoke out about their own struggles in the years since their mother’s death. Both brothers have given intimate interviews detailing their experiences. Harry shared that he didn’t deal with his feelings until the bottled-up demons left him angry, his life in chaos, continually feeling on the verge of a breakdown in his late 20s. He also shared that William advised him to seek therapy and that it had helped.

In Diana’s day, it was a much different story. When Andrew Morton’s bombshell book Diana: Her True Story came out,  it detailed her struggles with the pressure of sudden fame, becoming a member of the Royal Family, the worldwide obsession with her, as well as her unhappy marriage. In the book, which was later revealed to be based on interviews Diana conducted in secret with the author, she detailed her bouts with bulimia and self-harm, including one instance where she threw herself down the stairs when she was pregnant with William.

Diana’s sons have made sure something of lasting good has come of their mother’s life. She had a rich humanitarian legacy, known for leading public opinion with many “firsts,” from making physical contact with AIDS patients to show there was no danger to walking through a landmine field to show there was. And now her social media-savvy millennial sons and daughters-in-law have ensured her spirit lives on for new generations.

And with the boys, this openness and honesty is unprecedented. These princes, these literal fairy-tale figures, were brave enough to share their innermost fears in public. We, the public, were moved to see ourselves in them and to tentatively share and begin to deal with, our own mental health issues that have been tamped down for decades, too.

The week began with a surprise release Monday night of a video for Public Health England’s #EveryMindMatters campaign. The ad featured images of a people clearly in pain — with cameos by celebs Gillian Anderson and Glenn Close mixed in. But it is the voiceovers that make you sit up and take notice: first you hear a tag team of the plummy voices of princes Harry and William, then Meghan Markle’s Hollywood-honed purr gives way to Kate Middleton’s perfect “received” English. The fab four are together again! The disembodied royal voices direct viewers as to how and where to get help for mental health issues, including new access to instantaneous text-based emergency counselling.

Prince Harry teased his own World Mental Health Day project with a cheeky video released to the @SussexRoyal Instagram account. It was filmed, royal fanatics later sleuthed out, at his cousin Princess Eugenie’s home, Ivy Cottage, on the grounds of Kensington Palace. In it, the doorbell rings — in a God Save the Queen ringtone — and Harry opens the door to musician Ed Sheeran, sporting a similar hair and beard combo and grey polo T. “It’s like looking in the mirror!” the prince quips.

When the full video was released on Thursday (which was the actual #WMHD), Sheeran went heavy on the ginger gag, pretending he was meeting with the prince to avenge maligned redheads everywhere with a song. They quickly switched up to get serious with a PSA about mental health, urging viewers to reach out to friends and family who might be “suffering in silence.” British singer Sheeran has been open about his own “crippling social anxiety.”

At the same time, the entertainment industry has embraced the movement toward eliminating shame around mental health issues. Lady Gaga, Adele, Beyonce, Chrissy Teigen, Miley Cyrus, Lena Dunham, Demi Lovato, Carrie Fisher, Dwayne (the Rock) Johnson, J.K. Rowling and Ryan Reynolds are among the dozens of famous artists — people we admire and look up to — who have spoken out about their own battles with mental illness.

According to Psychology Today, the effects of these public conversations are measurable: “High-profile people who disclose their experiences with mental illness bring a positive light to health and wellness.” There is research to prove more people seek help after these kinds of disclosures, and stigma researchers – yes, that is a field – have shown those positive stories do, in fact, help change public opinion.

So yes, we are glad to see Harry and Meghan and William and Kate come together for this cause. We really don’t like the tabloid-fuelled feud narrative pitting brothers and their wives against each other. Both couples have made mental illness an ongoing, primary focus of their new — and as of this week fully separated — charitable foundations. We also love the wit behind the Prince Harry-Ed Sheeran video. And we look forward to the Apple TV project on deck for next year, a documentary about mental health that Prince Harry is making with none other than Oprah Winfrey.

Royals Open Up About Mental Health Struggles in Candid Video