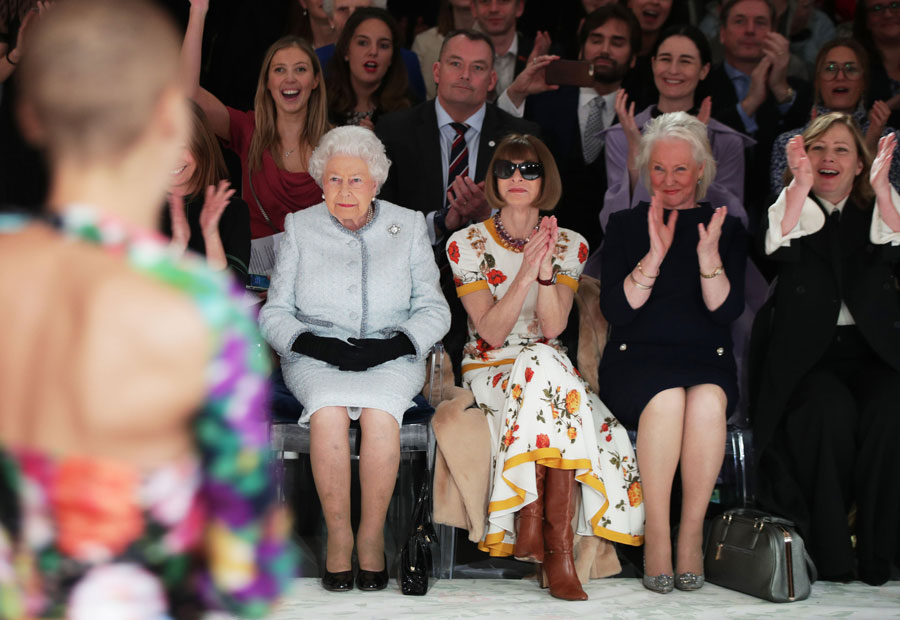 The queen of fashion, Anna Wintour, and the Queen of quite a few countries, appear together with their iconic props — handbag and sunglasses — and requisite poker faces at a 2018 London Fashion Week show. Next to Wintour is Her Majesty’s personal dresser Angela Kelly, author of a new book about the Queen, wearing a normal, happy face. (Yui Mok/AFP/Getty)

The Queen has been in the public eye her entire life and, as one of the most photographed women in the world, her signature style is known by all. We enjoy her ornate headgear and we all wonder what’s in her top-handled purse. Her look is versatile, going from state-visit formality, festooned with the Crown jewels, to the country-manner born in her tweeds, headscarves and hacking boots. But we still can’t get enough of her print frocks, pastel shades and monochromatic, brightly coloured ensembles, chosen so her subjects can see her from afar. As she has said, “I have to be seen to be believed.”

Kate’s and Meghan’s wardrobes have launched hundreds, maybe thousands of Instagram accounts, most recently and notably that of former Wall Street Journal style writer Elizabeth Holmes. So Many Thoughts, her must-refresh take on how and why the young wives of Windsor dress the way they do, has even landed her a book deal for HRH: So Many Thoughts on Royal Style, due in fall 2020. But in a thrilling move for old-school royal watchers, it is the sovereign, Queen Elizabeth II , who is the subject of a new book by her personal dresser, Angela Kelly.

It’s rare to get such an intimate look into the monarch’s life and a behind-the-scenes glimpse of her carefully guarded persona. It’s even rarer to get Her Majesty’s blessing, but the Queen did indeed approve The Other Side of the Coin: The Queen, the Dresser and the Wardrobe, which came out this week. In it, Kelly reveals she is a close and influential confidante, sharing some of the tricks and triumphs of tending to Queen Elizabeth II’s style for the past 25  years —  Kelly, a lorry driver’s daughter, joined the Royal Household in 1994.

And how close are the two? Well, Kelly reveals that she wears in Her Majesty’s shoes before engagements “to ensure that they are comfortable and that she is always good to go. The Queen has very little time to herself and no time to wear in her own shoes, and as we share the same shoe size, it makes the most sense.” Kelly also confirms the Queen continues her wartime habit of  frugality – after all, her wedding cake was famously made from donated rations.

When silk merchants from a Singapore bazaar brought their wares to the airport for the Queen and Kelly to peruse — bright colours being a royal favourite —  Kelly learned she could get the tax back upon leaving the country. She dutifully lined up at the cashier, knowing  “… the Queen is always keen to keep costs down.” She almost missed the plane, but writes, “I shouted over the plane’s engines a phrase I am sure the Queen does not hear very often: ‘I’ve got your tax back!’ The look on the Queen’s face was priceless as I handed her the tax refund.” The Queen started paying British taxes in 1992.

Kelly shares the Queen was involved in the minutiae of creating the replica of the Honiton Christening gown, commissioned by Queen Victoria as a replica of her wedding dress and worn by 62 royal babies, including five monarchs, until it was retired in 2004 because it was so fragile. For the new gown, most recently worn by Prince  Harry and Meghan’s son, Archie, Kelly wrote, “We dyed it in Yorkshire tea (the strongest, as we all know). We placed each piece of lace in a small bowl, from the Dressers’ kitchen, filled with cool water and a tea bag and left it for about five minutes, checking regularly until the colour was perfect. At each stage of the process, I would show our progress to the Queen: first the bodies, then the sleeves attached to it, then the skirt with the under-layers on, and finally the completed robe. Her Majesty was very interested to see how it was developing.”

Kelly was also a key part of the Queen’s decision to perform at the 2012 Summer Olympics in London. In a 007 sendup, the Queen received  Daniel Craig – in character as James Bond – at Buckingham Palace before they appear to parachute out of a helicopter above the stadium during the opening ceremony. It was Kelly who conveyed  the proposal  from Oscar-winning director Danny Boyle to the Queen. “There are few occasions on which Her Majesty will agree to break protocol … but she was very amused by the idea and agreed immediately. I asked then if she would like a speaking part. Without hesitation, Her Majesty replied: ‘Of course I must say something. After all, he is coming to rescue me.’ Kelly then oversaw two identical outfits for the scene, one for the Queen and one, which was kept secret, for the stuntman. There is no word on who decided to include the corgis.

Watch: Daniel Craig as 007 rescues the Queen in a Bond sendup at the opening ceremony of the 2012 Olympic Games in London.

For her troubles, Kelly, whose official title is personal assistant and senior dresser to Queen Elizabeth II,  was appointed a Member of the Royal Victorian  Order in 2006 and promoted to Lieutenant in 2012.  It’s a far cry from how others in royal service have been treated when they spill the beans. The Queen and Princess Margaret’s nanny, Margaret Crawford, was ostracized by the Royal Family for engaging with reporters (perhaps with a tacit sign-off from the Queen Mother) and later published a best-selling book, The Little Princesses, in 1950. Paul Burrell, Diana’s butler and confidante, met a similar fate after he did a press tour revealing a slew of family secrets in 2002, with Princes William and Harry letting it be known they felt betrayed. But perhaps the butler did it, after the Royal Family let him stand trial at the Old Bailey for stealing  items, including letters, from Diana. Burrell was cleared on the 12th day of the trial after the Queen suddenly remembered that, after Diana’s death, the butler told her he was taking some of the items for safekeeping. It turned out that Burrell, like Kelly and 007, was in Her Majesty’s service.

Move Over, Meghan Markle. Prince Charles Has a Fashion Collection, Too

What’s Inside The Royal Purse?

6 Style Tips You Can Use From Queen Elizabeth