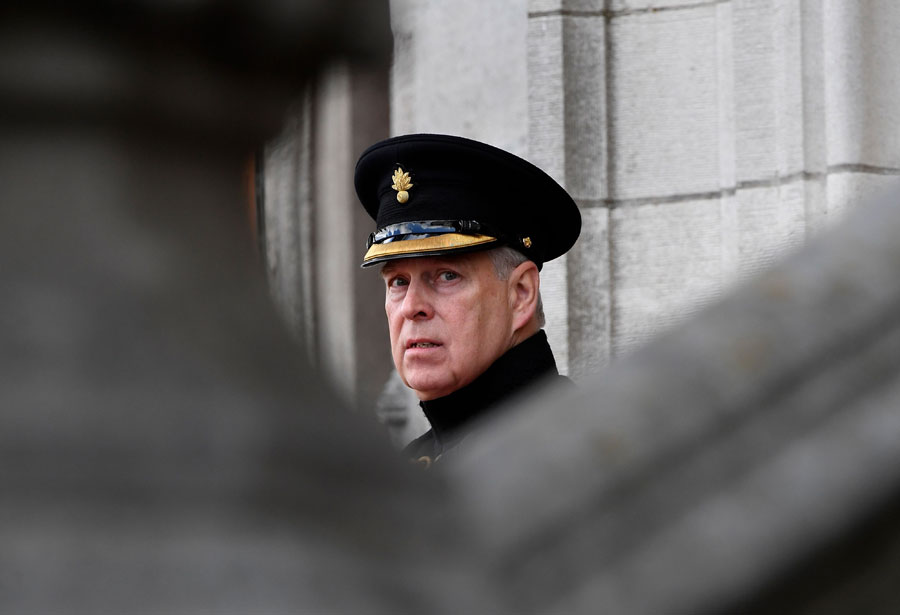 The Queen has reportedly cancelled Prince Andrew’s 60th birthday celebration, as fallout from his evasive BBC interview on his association with sex offender Jeffery Epstein continues.

The Times reported that the Queen will forgo a larger celebration in February for a small family dinner.

Meanwhile, according to the Mirror, Johanna Sjoberg, who has alleged the Duke of York groped her breast in 2001 in Epstein’s New York home, is prepared to talk to the FBI as they continue their probe into Epstein’s sex trafficking.

According to an anonymous source quoted by the Mirror, investigating Andrew’s alleged involvement is still a priority.

“As a victim of Epstein, Sjoberg’s testimony over how she was recruited and abused is vital to the FBI,” the source said. “Andrew has had serious allegations made against him and agents are determined that a person’s standing in life does not make them immune from being ­questioned.”

Sjoberg’s allegations were originally made during a defamation case involving Epstein’s ex-lover Ghislaine Maxwell and Virgina Giuffre — born Roberts — who has claimed Epstein forced her to have sex with the Duke of York three times at the age of 17.

Prince Andrew also made headlines on Monday as the disgraced royal received a visit from his daughter Princess Beatrice for the first time since the interview aired.

The princess took her fiancé Edoardo Mapelli Mozzi with her to Windsor Castle, where her father has been staying since he stepped down from his royal duties.

A pressing subject during the visit may have been the scaling down of the couple’s nuptials, which, according to the Daily Mail, will be a much less opulent affair than her sister Princess Eugene’s wedding last year.

“It will be more low key,” a close friend of the family confirmed to the Daily Mail. “Bea and Edo are happy for their wedding to get less attention.”

The cancelled birthday plan is the latest measure in removing Prince Andrew from the public eye.

Last Wednesday, after days of squirming in the aftermath of the weekend BBC interview, Prince Andrew announced that he would be stepping back from royal duties for the “foreseeable future.” The ill-fated, hour-long interview, by Emily Maitlis for BBC2 Newsnight, was near-universally condemned for Prince Andrew’s refusal to use the platform to express appropriate sympathy for the many female victims of his long-time friend and business associate Jeffrey Epstein.

The 59-year-old royal released a statement Wednesday admitting that his ties to Epstein had become a “major disruption” for the Royal Family and that he does indeed, “unequivocally regret my ill-judged association with Jeffrey Epstein.” He also noted, a day late and a dollar short, that he deeply sympathized with Epstein’s victims and “everyone who has been affected and wants some form of closure.”

He added, “Therefore, I have asked Her Majesty if I may step back from public duties for the foreseeable future, and she has given her permission.”

The statement also said Prince Andrew is “willing to help any appropriate law enforcement agency with their investigations, if required.”

Disappearing behind the royal guard will effectively sacrifice Prince Andrew’s public career, though the withdrawal is also likely to protect him from further interrogation. He may have diplomatic immunity, but that does not extend to the court of public opinion.

(This story has been updated on Nov. 25 by Andrew Wright)

Since Epstein’s death, one of his victims, Guiffre, now 35, has loudly reiterated her claims that Prince Andrew had sex with her three times in three countries around the world in 2001, when she was underage. Most recently, she appeared on the Australian version of 60 Minutes repeating her detailed version of how she says the assaults transpired.

Prince Andrew had hoped the BBC “no holds barred” interview, as it was billed, might clear his name. He satisfied no one, however, with his claims that “I have no recollection of meeting this lady, none whatsoever.” His other PR goal in doing the sit-down, was to deflect attention from the fact he had kept up a friendship with Epstein after his first conviction. His claims that perhaps he was “too honourable” in doing so were met with widespread ridicule. They were also seen as proof the coddled and insulated 59-year-old Prince and his realm of privilege was out of touch with modern realities.

His proffered alibis blew up social media in real time as the interview aired and only rose to a shout in the days following. The most memorable of these bizarre assertions involve him taking a trip to Pizza Express in the English town of Woking with Princess Beatrice on the exact 2001 night that Giuffre said she was trafficked in London, aged 17. And then came the nose-puller of a story about his inability to sweat due to PTSD, thus countering Giuffre’s memory of him being sweaty at Tramp’s nightclub.

The most damage likely came as corporate backers of Prince Andrew’s [email protected] UK business development scheme began to pull out — giants KPMG and Astrozeneca both announced they were reviewing their participation in light of the Prince’s disastrous interview. BT (British Telecom) also announced today that they were reviewing their relationship with the iDEA project, of which Prince Andrew is patron, “in light of recent developments… and hope that we might be able to work further with them, in the event of a change in their patronage.” Prince Andrew’s recently-married daughter, Princess Eugenie, who started a charity for human slavery victims called Anti-Slavery Collection, was said to be particularly concerned for its future as well.

The interview also blasted back to the forefront a flurry of old stories about the Prince’s poor judgment in associates over time, a tag-team of shady oligarchs who added to his murky reputation of a playboy on the make.

Prince Andrew’s decision to step back out of the public sphere comes amid heavy speculation that heir-in-waiting, Prince Charles, in particular has been displeased with the way his brother has handled this ongoing crisis. Charles and his wife Camilla, Duchess of Cornwall, recently wrapped up a six-day tour of New Zealand.

News of the tour was blown off the front page by the fallout of Prince Andrew’s handling of the ongoing scandal. The island nation has one of the shakier relationships to the Commonwealth, and Charles has been simultaneously worried about republican sentiment there. The situation, royal reporter Richard Kay speculated in The Daily Mail, may be enough to encourage Charles to consider “slimming down” the ranks of the working royals. If Prince Andrew is going to be keeping a low profile behind palace gates, his daughters, the only full HRH princesses of this generation of young royals, also have their future at ceremonial occasions at stake.

This will become all the more pressing for Prince Andrew as he and ex-wife Sarah, Duchess of York, prepare for the marriage of their eldest daughter, Princess Beatrice, set for next year. Perhaps everyone is hoping that, after a chaotic summer and autumn of bad press for the Royal Family, a quiet holiday season and some happy family church shots at Sandringham (minus the Sussexes, who have suffered their own share of painful press this year) might bring down the overall heat before Beatrice walks down the aisle on Prince Andrew’s arm.

Prince Charles and Prince Andrew At Odds Over Royal Roles