Happy Birthday, Kate Middleton! At 38, the Duchess Has Grown Into Her Royal Role of Future Queen 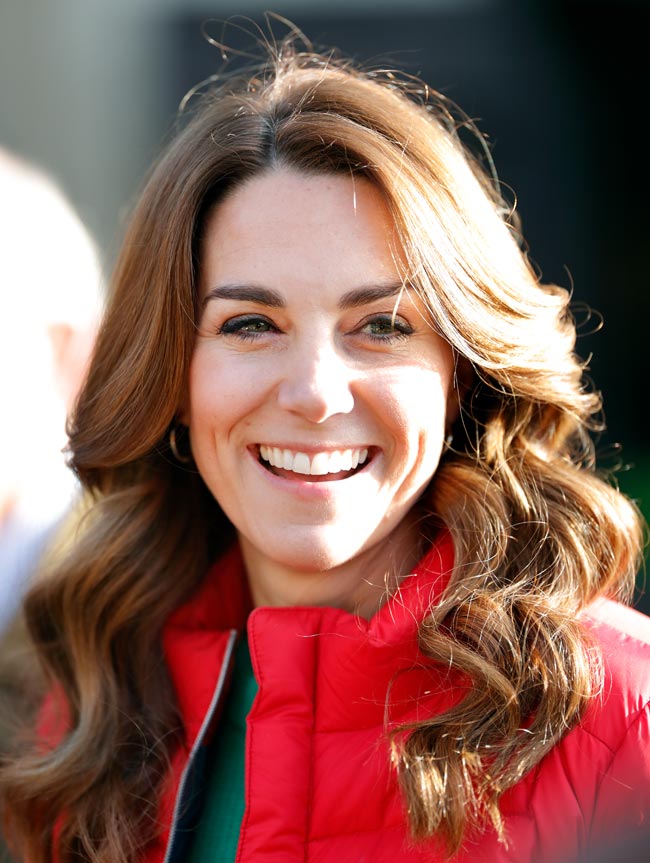 Catherine, Duchess of Cambridge joins families and children who are supported by the charity Family Action at Peterley Manor Farm on December 4, 2019 in Great Missenden, England. Photo: Max Mumby/Indigo/Getty Images

Today, on the occasion of Catherine, Duchess of Cambridge’s 38th birthday, it is time to consider ditching the diminutive version of her name – Kate – and declare her all grown up and, yes, regal. Indeed, her husband of almost nine years, Prince William, has been modelling the use of her full given name increasingly often these days.

With the breaking news of Harry and Meghan stepping down as “senior” royals, it is now all the more apparent that the Cambridge family has been preparing to step up into the more focused spotlight. All the official photos – and pudding stirring – released over the holidays of the Queen and her three heirs set the stage. Kate is married to No. 2 in line to the throne and has birthed No. 3. She is now taking on the mantle by moving fully into her role as future queen as Prince Charles’ vision of a streamlined monarchy focused on the line of succession comes together. The Cambridges appear to have a happy marriage and an idealized family unit, both of which are necessary for the future of the monarchy after decades of scandals, and Kate sits at the heart of that warm and fuzzy image.

As a bona fide worldwide pop cultural phenomenon though, Kate is the short form that will likely stick with Catherine even after she eventually takes her place beside King William as Queen Consort. This past year, Kate has undergone a subtle transformation before our eyes and is demonstrating the necessary confidence and gravitas of a queen in waiting. Fresh off her third maternity leave, Kate has a new polish and poise and focus to her charitable and official duties. She has zeroed in on themes close to her heart – maternal, baby and child health and development, in specific – and her interaction with these causes feels authentic. We have also heard Kate speak up more in the past year, quite literally, as she has begun giving speeches at events and appearing on television.

The Duchess also had a triumph with her Back to Nature children’s play garden at the Chelsea Flower Show and held her own (without William) at the NATO anniversary reception at Buckingham Palace. Another triumph of 2019 was the couple’s tour of Pakistan, where many of the whistle stops were focused to highlight Kate’s interests and concerns.

The Queen has noticed Kate’s professional development and is said to be grooming her personally to take on her increasingly serious responsibilities. To acknowledge this, on the Cambridges’ last wedding anniversary, Queen Elizabeth awarded Catherine the designation of Grand Dame Cross of the Royal Victorian Order, the highest ranking possible. The award, originated by Queen Victoria, is for services rendered to the Sovereign, for good works on behalf of the Empire. This was a very clear sign Kate had earned her place in The Firm, and she proudly wore the (quite large) yellow-ribboned insignia on a white ruffled McQueen gown to the State Dinner given for Donald Trump a few months later.

In the early days of “Waity” Katy’s romance with Prince William after they met and fell in love at university, she endured some harsh ridicule from the press because of how long it took William to propose. The press positioned her as whiling away the time without setting forth on a career path and, because she was a commoner, the thought of Kate marrying an heir to the throne was unprecedented. She took a good deal of tabloid needling about her family’s middle-class background – her surname was Middleton, after all. Sure, Kate’s dad and mom were rich due to their party supplies business but were only a few years removed from their earlier careers as flight dispatcher and flight attendant, respectively. Kate proved her mettle, though, by never acknowledging the stress.

Since the engagement was announced in late 2010, with Diana’s legendary sapphire ring on her finger – nine years in and after one “we’re on a break” – Kate has miraculously rarely put a foot wrong. She withstood the fierce glare of a wedding to an heir to the throne and dutifully settled into a simple existence with William in Anglesey, Wales, where he was a search-and-rescue RAF pilot. That newlywed idyll was followed by a retreat to Anmer Hall in Norfolk, where she spent the early years with George and Charlotte in relative seclusion, providing Kate with the time and the space away from cameras to build her confidence in private.

We can best chart her on-the-job through her wardrobe. Now, Kate has always been a sharp dresser. And then she did have to dress around three baby bumps. But her style, though much copied and lauded for #TheKateEffect of selling out in a flash, was a bit on the safe side. Yes, we can say it without being mean: she was a bit mumsy. We can see why: joining the Royal Family is beyond daunting. With the glare of constant scrutiny from paparazzi (and then the whole of the internet), it was likely better for her to err on the side of caution. Thus she went with tried-and-true guaranteed chic options such as her ubiquitous coatdresses and the workhorse L.K.Bennett nude pumps. But the clothing often made her look older – and stiffer – than she really was.

Now that she has actually aged into her signature look, in 2019, Kate finally felt free enough to experiment. It was hardly a revolution – more a tweaking of her existing style. Much was made of her bringing in a temporary new “stylist” in the form of former Voguette Virginia Chadwyck-Healey, while her long-time PA, Natasha Archer, was off on her own mat leave. Thus there was Kate at a London children’s centre appearance, wearing a magenta-bowed Gucci blouse backwards. The classic stylist’s trick brought the bow to the front, and indeed, Kate went on to work that bow-blouse look all year. That appearance is also notable because it showed Kate in fashion-forward wide-legged trousers. Previously, she had only worn cropped pants and skinny jeans for sporty events.

Also notable on her style evolution was the smashing Ellie Saab teal lace tea dress (again, with a bow neckline) that she wore to the Royal Ascot. Then there was the time she wore artfully clashing colours to Archie’s christening. Her salmon (bowed) Stella McCartney dress was paired with a red, braided hatband by Juliette Botterill Millinery and red pumps. The dreamy black lace McQueen gown she wore for date night with William at the Royal Variety performance at the end of the year was simply a standout fashion moment.

Another greatest hit of 2019 was the McQueen military-style jacket with frog buttons and sharp shoulders that she wore to the cenotaph services on Remembrance Sunday, with a black net veiled hat. Then there were the new, shorter (just above the knee) lengths she tried out this year (best shown in a fit-and-flare coatdress she wore to welcome the equally stylish Spanish Queen Letitzia earlier last year). She also pulled out some cute and on-trend microbags instead of all the endless clutches that used to be her go-to.

For less formal occasions, the Duchess also showed new style savvy this year. At the drop for Charlotte’s first day of school in September, Kate debuted a fresh haircut with golden highlights and a soft silk dress – fully appropriate, as she always is, just with an edgier twist. For both formal and casual events on her and William’s Pakistan tour, Kate’s fashion choices were also a triumph of diplomatic dressing – flag colours, local labels and region-appropriate fully covered long coat-over-pants styles, plus some thoughtful tribute throwbacks to Diana, Princess of Wales.

But if there is one moment that we would pick to show Kate coming into her own, wearing clothing that reflects who she really is under all the protocol, it would be last Sunday at Sandringham Church services with the Queen. Kate and William had their social set in tow, houseguests for the weekend at a pre-birthday celebration for Kate. The Duchess chose a most unexpected bright blue fedora with literal feathers in the cap to top a casual-chic winter outfit with coat and high-heeled boots. The whole thing shouldn’t have worked, but it did. On the cusp of 38, Kate looked absolutely beaming, a woman coming into her own power. There is nothing more compelling than that.