Royal Reset: What’s Next As Meghan and Harry Step Away from the Palace? 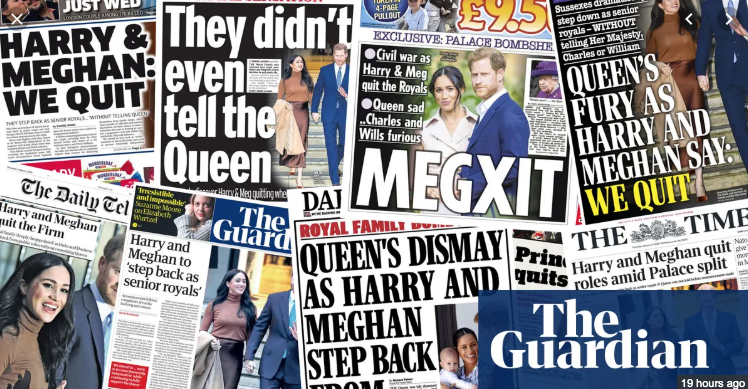 Photo: Courtesy of The Guardian

It has been a (long) day since the Duke and Duchess of Sussex dropped a bomb on the Queen, the Royal Family and the British people, upending social media and knocking the Iran-U.S. standoff and a major airplane crash off the front pages of the world. Everyone now knows the details: after a beleaguered end to 2019, Harry and Meghan hatched an escape plan, perhaps finalized during their six-week Canadian holiday idyll, then launched it fully formed (and apparently without negotiation or permission from the Crown) on their Instagram and website. This was accompanied by a host of new rules about how they will interact with the media in the future (with tongs) and how they will become financially independent (details not determined but meaning that they are aiming to be free of censure). Also revealed: that the family intends to become bi-continental while still pledging allegiance to the Queen and committing to fulfill their duties to her and support their patronages, as they “carve out a progressive new role in the institution.” At first glance, it seemed like, hey, why not? Harry and Meghan are a charismatic, iconoclastic couple with an internationally vibrant “brand” that would travel well and could do a lot of good in the world, especially relevant within the Queen’s beloved Commonwealth – Harry is president of the Queen’s Commonwealth Trust while Meghan is the vice-president. But they stepped on their own message by defying the Palace. This morning, fresh reports revealed that Harry and Meghan did spring their announcement on the 93-year-old Queen – who is still reeling from 97-year-old Philip’s holiday hospitalization and car crash earlier last year, the toxic fallout from the Prince Andrew/Epstein interview debacle and Harry and Meghan’s own pot-stirring documentary surprise in which they first expressed the depths of their royal unhappiness. We are very uncomfortable with anyone disrespecting Her Majesty. Queen Elizabeth has put her responsibilities above all else now for 63 years, and her long tenure and devotion to service deserves everyone’s ultimate respect. Ditto Prince Charles, who partially bankrolls the couple, to the tune of just under half of his £4.9 million allowance to his two sons, from his billion-dollar cash-cow Duchy of Cornwall.

It was reported this morning that after the Queen expressly forbade the Sussexes from making their announcement, they did it anyway, reportedly giving Charles and William a scant 10 minutes’ notice. Now, any way you slice it, that is disrespectful and basically declaring open warfare. Announcing they are keeping Frogmore Cottage, their current official residence, a gift/loan from the Queen, is particularly presumptive if she didn’t green light this new “progressive role within the institution” that the couple so sensationally announced on their Instagram account @sussexroyal. Ask anyone in any family, and they will tell you that is entitlement, and it is not on.

Cue the waves of hyperpolarized response from pundits and social media average Joes alike (#Megxit is still trending). Let’s take a moment to chew through this and have a think about what it all means. We don’t yet have all the facts and we are no doubt influenced by the sheer volume of Royal Family drama this past six months. The current hyped-up state of affairs has us all speculating more freely than we should, frankly.

People are really reacting more to the delivery method than the message. Harry and Meghan pulled a coup here, putting their bid for freedom straight to the public, against the Queen’s stated wishes. This is indeed something Harry’s mother, Diana, also did. It also makes us suspect they felt they had no other choice, that they would be swallowed back up if they didn’t strike first.

The British people’s main anger card here is taxpayer-funding, the Sovereign Grant that covers their security, some office costs and the renovations at Frogmore Cottage. Let’s instead focus on what is really important here as the real heart of the story is easier for us North Americans to see. We on this side of the pond believe in the right of everyone to self-determination and, yes, while QEII is our monarch, too, it is different. Ultimately, given time and reassured of the Queen’s blessing for the plan, most people certainly in North America would probably agree that Harry and Meghan and adorable little Archie should be able to live how and where they want. Watching how unhappy they were in that documentary wasn’t comfortable. Frankly, saying that Meghan knew what she was getting into isn’t relevant. Living in a fishbowl, being picked apart by rabid elements of the British press the same as Harry’s mother was, dealing with veiled and not-so-veiled racism – none of that is tenable.

Yes, somehow, William and Kate have worked out a separate peace with their roles and the press and the Royal Family itself. Bravo to them. Their roles are clearly laid out for them, and they are receiving guidance and grooming to move onwards and upwards someday through the line of succession. Harry is in the much-harder position of being told two things – one that he (and Meghan) are beloved like his mom was but also simultaneously that he should “know his place” and hide that light under a bushel (or a lifetime of second-string handshaking, ribbon-cutting and cultural exhibition-watching). The couple each and together have global brands. They want to live in Canada (presumably – or near Meghan’s Los Angeles-based mom at least) and focus on the Commonwealth. There is nothing wrong with taking the royal brand international, where they could do more good.

Changes were already in motion: Harry is now sixth in line to the throne, and Archie, for whom they pointedly they rejected any title, is seventh. The shift to refocus the attention and duties onto the direct line of heirs had already begun. We just had a flurry of official photos released over the holidays with the Queen, Charles, William and George to reinforce the new streamlined future of the monarchy. So Harry and Meghan, with their megawatt charisma and star power, were facing a big downside, a life of support roles and all the psychic costs of the attention (and the prospect of endless criticism).

Meghan came into this circus as a fully formed, self-made, feminist adult woman with a voice and independent ideas. Harry had begun to find his voice and fulfilment in his passion projects and causes (Invictus Games, mental health, the environment). Yes, the Sussexes have flashy, famous friends. Yes, they have cut ties with some of their old friends and family. Who else are they going to relate to, with their every sneeze chronicled and disseminated like the flu? Anyway, so what? We all do that, prune and curate our circle as we grow into new and different people!

There are some thorny questions ahead. And yes, money will come into it. If you look back now, it seems the couple has been laying the groundwork for a jailbreak for some time. They have been striking back with lawsuits against the media outlets who have hurt them. And Meghan has been hiring American image management experts and patenting a raft of Sussex-themed lifestyle products. In their statement, they discuss building a new charity (details all TBD) and working toward financial independence. Yes, they could write books, produce films (in fact, Harry is already on working on a mental health project with Oprah Winfrey for Apple TV+), give inspirational speeches – all the paid normal celebrity activities – if they are no longer dependent on the Royal Family.

It remains to be seen if they can somehow swing this “half-in, half-out” kind of model. It has not been done before, and there is grave danger of them being seen to be “cashing in” on their royal status. Keeping their HRH designations – and attendant personal security, which will be necessary under all circumstances due to their extreme level of fame – may become a thorny issue.

But you know what? It is a shame Harry and Meghan felt this had to be a coup-slash-confrontation. If they had taken the time to win hearts and minds and demonstrate that they were going to use their platform for good and somehow keep their personal profit separate from their good works, most people would be behind them. We predict that they still will be. This us-against-the-world stance will definitely make it harder for them in the short term, but sometimes ripping off the Band-Aid is the best way forward in the end.