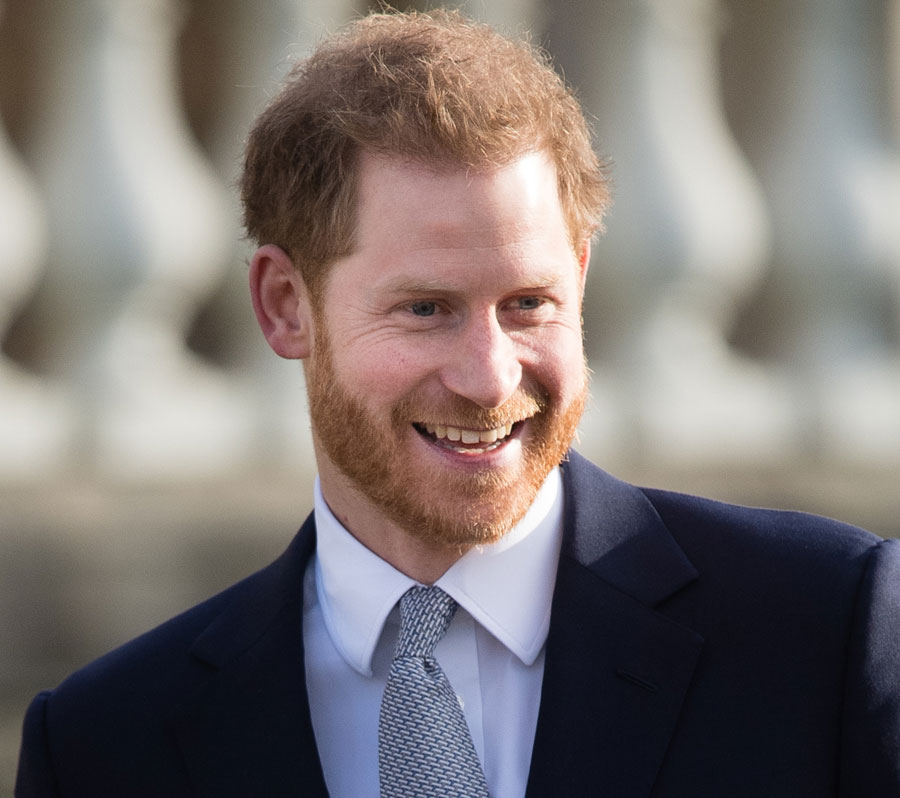 Prince Harry, Duke of Sussex hosted the Rugby League World Cup 2021 draws at Buckingham Palace on Thursday in what could be his last official engagement as a senior member of the Royal Family. Photo: Samir Hussein/WireImage/Getty Images

As the media storm raged on both sides of the Atlantic over Harry and Meghan’s plan to step back from royal duties, the new royal motto could be Keep Smiling and Carry On.

Prince Harry, Duke of Sussex continues to fulfill duties in London, appearing at Buckingham Palace today to greet young rugby players on a makeshift pitch on the lawn and, as patron of the Rugby Football League, drawing the names of the teams that will play each other at 2021 Rugby League World Cup.

After joking around with the schoolchildren, he was walking to the palace when a reporter shouted, “Harry, how are talks going about your future?” The BBC reported he responded with a loud  laugh and carried on inside. In what could be his last official engagement as a senior member of the Royal Family, he was in a “jovial mood.” The Sussexes  will spend more time apart, as Meghan and Archie remain in B.C. and Prince Harry is reportedly staying in London to work out details of the couple’s renunciation of their full-time Royal roles.

Meanwhile in Canada, Meghan was spotted at the seaplane terminal in Victoria on Tuesday, where she took a short 30-minute hop to the mainland to visit two Vancouver charities.

First up was a women’s shelter in Vancouver’s gritty Downtown Eastside neighbourhood, where she sipped Tetley tea and talked to staff for an hour about its work with the 500 women and children who use its drop-in services, eat free meals and stay in its emergency overnight shelter every day.

A photo posted to its Facebook page Wednesday shows Meghan, surrounded by managers and frontline workers, with a big grin on her face, accompanied by the caption: “Look who we had tea with today! The Duchess of Sussex, Meghan Markle, visited us today to discuss issues affecting women in the community.”

The next stop was Justice for Girls, which advocates for teenage girls living in poverty and their rights to justice, education, health care and equality, where she sat down to talk with co-directors, members of the board and staff.

“Yesterday, The Duchess of Sussex, Meghan Markle visited to discuss climate justice for girls and the rights of Indigenous peoples. Was great to talk about the importance of a holistic approach to social justice, and the power of young women’s leadership,” it tweeted, along with another group photo of a beaming Meghan surrounded by women. The visits come amid a legal battle that is ramping up after Meghan sued a U.K. tabloid for breach of privacy, copyright and data protection, alleging the Mail on Sunday illegally published a private letter she wrote to her father, Thomas Markle, before her May 2018 wedding to Prince Harry.

The Telegraph newspaper reported Thomas is prepared to testify against Meghan, after it reviewed court documents filed Tuesday that show her father will be central to the tabloid’s defence.

The Duchess of Sussex visited the Vancouver women’s shelter a day after Prince Harry was summoned to Sandringham House in Norfolk by the Queen to meet with his father, Prince Charles, first in line to the throne, and brother William, who is second in line. After the meeting, the Queen issued a statement saying she agreed to Harry and Meghan’s plan to disentangle themselves from the Royal Family, which includes becoming financially independent and living part-time in Canada. The statement said the details of their transition would be worked out “in the coming days.”

Meghan and baby Archie stayed in Canada at the palatial waterfront digs outside Victoria where she and Harry spent the Christmas holidays. Meghan did not call in to the summit, with a palace spokesperson confirming she and Harry decided “it wasn’t necessary.”

Meanwhile, a boat operator told Global News he turned down a client who booked a trip with his Bay to Bay Charters when he realized the “filmmakers” were actually reporters from Japan and England who wanted a better look at Mille Fleurs, the 12,000-square-foot home in North Saanich where Harry and Meghan are staying. “Canadians and all of the islanders respect the privacy of others and would not feel good about taking them out to take pictures of the Royals,” Capt. Miles Arsenault told Global.

Back in England, William and Kate were also in good cheer as residents of Bradford in Yorkshire greeted them enthusiastically on Wednesday at their first official engagement of the year. After a stop at City Hall, they made mango milkshakes at MyLahore, a South Asian café and bar, where they met local students in an apprenticeship program.

On Monday, Prime Minister Justin Trudeau said the federal government hasn’t been involved in any talks about the royal couple’s security in Canada, although there will be “many discussions to come.”

“There are still a lot of decisions to be taken by the Royal Family, by the Sussexes themselves as to what level of engagement they choose to have,” Trudeau told Global National. “We are obviously supportive of their reflections but have responsibilities in that as well.

“We’re not entirely sure what the final decisions will be.”

There have been grumblings in Canada about whether taxpayers will be on the hook for the security costs. A security expert who previously worked for the RCMP told the Globe and Mail Tuesday that protection for Harry and Meghan could cost $10 million a year.

“They need personal body guards all the time. You have to pay those peoples’ salaries. You’ve got to pay for the vehicles they travel in and the aircraft they travel in. You have to pay for the communications equipment they require because it has to be sophisticated so that you can’t listen to it,” said Chris Mathers, who runs a Toronto-based consulting and investigative firm.

On Wednesday, Prince Harry, founder and patron of the Invictus Games Foundation, used the @sussexroyal Instagram account to announce that the 2022 games for wounded military personnel and veterans will take place in Dusseldorf, Germany. It was at the 2017 Invictus Games in Toronto that Harry and Meghan made their official debut as a couple.

So far, the young Royals are keeping calm and carrying on, with big smiles all around.