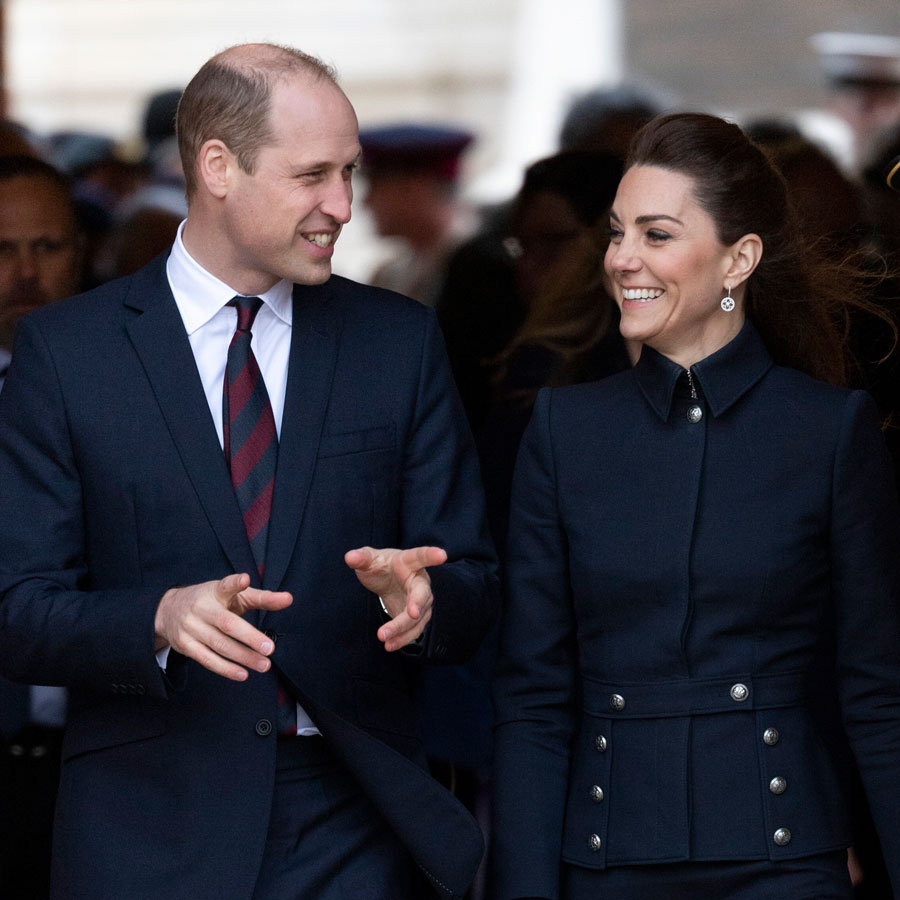 William and Kate stepped up for a rare joint appearance today with Charles and Camilla in Leicester. The No. 1 and No. 2 royal-couple power play was seen as a show of solidarity in support of a cause close to their hearts: a rehab centre for members of the British armed forces called the Defence Medical Rehabilitation Centre Stanford Hall in Loughborough.

The British press was quick to dub the father-son couples’ outing as “the new Fab 4,” referring to the affectionate handle given to Will and Kate and Harry and Meg dating back when the American actress first joined the fold.

This bit of cheer comes as more bad news was splashed across the front pages this morning – Princess Anne’s son, Peter Phillips, and his Canadian-born wife, Autumn, parents of royal flower girl favourites Isla and Savannah, announced their separation yesterday after 12 years of marriage. The Telegraph reported the Queen was “upset” by the news, as Autumn was considered one of the monarch’s “favourites,” who was chosen to ride to church with the Queen on occasion.

In addition to a tour (still in the planning stages) of areas of Australia devastated by the ongoing bushfires, today Kensington Palace announced the Duke and Duchess of Cambridge will go on a royal tour of Ireland in early March.

Unlike Harry and Meghan, whose drama – by accident or design ­ – often knocked the family’s good works off the front pages, the Phillips’s separation announcement could not compete with today’s royal outing. Another thorn in the Royal Family’s side may draw blood again on Sunday when the long-anticipated CNN series The Windsors airs. The pairing up of the two pairs of top royals this week may well be a pre-emptive positivity strike.

To distract from the many and varied subplots and scandals of late, the royal foursome firmly refocused the narrative on official royal business. They all took the train to Loughborough bright and early this morning. The duchesses were suitably covered up for the chilly February weather, with Kate re-wearing an on-theme, military-styled Alexander McQueen navy jacket and skirt. Camilla wore a forest-green outfit with a black hat. Despite his sharp suit, William took a turn at wheelchair basketball at the centre. A touching father-son moment ensued as Prince Charles was seen to encourage William with a hearty shoulder squeeze after William failed to make a basket; afterwards, he went back onto the court and scored to loud applause all round.

William was on hand to open the Stanford Hall centre in June 2018 and has long been its patron, helping to raise funds for the move to this new location. The royal foursome also met with patients and the staff who provide occupational, physical and neurological care for the veterans, as well as the Help for Heroes swimming complex.

It was a full day for the Prince of Wales and the Duchess of Cornwall, who took their leave of the Cambridges after the rehab hospital and continued a tour of the area. Charles and Camilla paid a visit to some farmers and stallholders at Leicester Market and checked in on a women’s charity, Shama Women’s Centre. Camilla then went off solo to tour Leicester Hospital, while Charles headed to the last rattan weaving workshop in Europe located in Thurmaston. They were due to reunite at the Cambridge Satchel Company to round out a full day’s slate of handshaking and posing for photogs.

These kind of work-a-day events comprise the bulk of royal duties carried out around the British Isles. For all the grandeur and pomp of big-ticket annual events like Trooping the Colour, there are many, many more humdrum incidents around the nation. And yes, as Harry and Meghan have left the country and the Queen’s service, more of those mundane duties are being shouldered by the senior working royals. By bringing the two power couples together on one of the less glamorous outings on the calendar, the family has guaranteed themselves bigger press coverage and a chance to show off unity in the face of various adversities.

Kate in particular, who has earned the sobriquet the Children’s Princess (an echo of Diana’s nickname, the People’s Princess), has stepped up to take on her share. This has been a big year for the mother of three: now that Louis is a toddler and her elder two are in all-day school, Kate is doubling down on projects that fulfill her own mandate. Late last month, Kate announced her own major initiative, a nationwide online survey called Five Big Questions to spark conversation about child development. She set out on a tour in support of the project, appearing in Birmingham, Cardiff, London and even Woking, Surrey, most recently known as the location of the Pizza Express Prince Andrew used as an alibi in his disastrous Nov. 16 BBC Newsnight interview about his relationship with the late disgraced U.S. financier and sex trafficker Jeffrey Epstein.

With Andrew out of the picture and Harry and Meghan’s Jan. 8 blockbuster announcement that they were stepping down, Kate turned up the glam as she and William hosted a reception at Buckingham Palace for African leaders on Jan. 20. On behalf of the Queen, the Cambridges welcomed African presidents and prime ministers to the UK-Africa Investment Summit. For the evening reception, Kate stood out in a glittering garnet-red, midi-length dress by a label called Needle & Thread. The chic London label – a favourite of celebs of all ages, from Drew Barrymore to Sarah Jessica Parker to Helen Mirren – is by Hannah Coffin, who formerly designed the edgy London contemporary mall brand Allsaints.

Prince Edward and Sophie, the Duchess of Wessex, also attended the reception, with Sophie Wessex also wearing a red dress. Senior royals do appear to be supporting each other at major events in the wake of the Harry and Meghan exit imbroglio. The strategy to deflect and distract by assembling as much royal star power as possible appears to be deliberate.

Prince William has focused his energy on causes close to his heart as well. The heir to the throne popped up at the Davos World Economic Forum in January. The glittering annual Swiss mega-conference is where international political, business and thought leaders congregate (and self-congratulate). William interviewed 92-year-old David Attenborough, whose latest project in production is Our Planet for Netflix. The Prince went on to challenge leaders’ inertia on the subject, criticizing them for taking so long to address climate change with policy change.

Attenborough and the Prince are also teamed up on the Earthshot Prize, an initiative of the Royal Foundation of the Duke and Duchess of Cambridge. The prizes, to be awarded to five winners a year over 10 years, are intended to seek “answers to the biggest issues currently facing the planet, including: climate and energy, nature and biodiversity, oceans, air pollution and fresh water.” A long and ambitious list, and the name – Earthshot – is meant to evoke former U.S. President John F. Kennedy’s Moonshot initiative, devised to beat the Russians to put a man on the moon. The press release from the Cambridges’ foundation explains: “Just as the Moonshot that John F. Kennedy proposed in the 1960s catalyzed new technology such as the MRI and satellite dishes, the Earthshots aim to launch their own tidal wave of ambition and innovation.”

In all of our lives, there is good and bad, boring and glamorous, mundane and Moonshot. These extremes are just more extreme in royal life. Getting attention for good causes exists alongside deflecting attention from bad news. One thing is for sure, the royals are aware of power in numbers and, whenever they match up their top-ranked members, they know they will get exponential attention. Today’s foursome proves that basic royal math.