Rock On: Jon Bon Jovi Duets with “Just Call Me Harry” to Benefit the Invictus Games 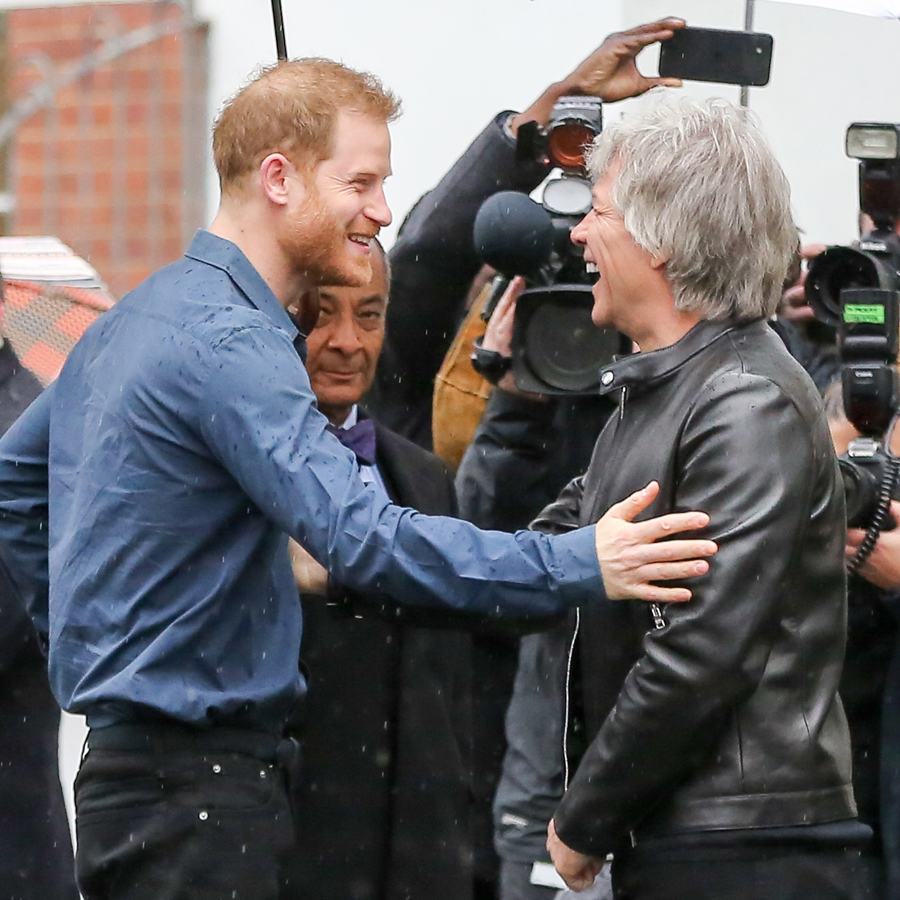 The Duke of Sussex and Jon Bon Jovi met at London’s famed Abbey Road Studios on Friday, where the pair recorded a special single for the Invictus Games Foundation alongside members of the Invictus Games Choir. Photo: Dinendra Haria/Anadolu Agency via Getty Images

When Jon Bon Jovi jokingly referred to the Duke of Sussex as “the artist formerly known as Prince,”  little did we know how far Harry would run with it.

The man who is sixth in line to the throne has made it clear he no longer wants to play the part of the prince.

When Henry Charles Albert David Mountbatten-Windsor arrived in Edinburgh on Wednesday for a sustainable travel conference, he told his hosts how to address him in a post-Royal world. “He’s made it clear that we are all just to call him Harry,” the event’s host told the crowd.

Perhaps he also wants to offload the Scottish subsidiary titles bestowed on them by the Queen when he married Meghan in May 2018. The Earl and Countess of Dumbarton does not possess an irresistible cachet.

So is it to be Just Sussex? Or, as the haters in the comments section of the London tabloid, the Daily Mail, suggest, Just Sex?

On Monday, Just Harry took a commercial flight from Vancouver to London to wind up his royal commitments before he and Meghan end their roles as senior working royals on March 31.

Sensibly, he made his way to Scotland by train for the Travalyst conference, the global eco-tourism initiative he launched in September 2019 with four corporate partners that aims to make travel more sustainable. After all, Harry got a lot of flak when he announced the organization on Instagram, with commenters berating him for “his private jets taken for unnecessary vacations” and “electricity-gobbling mansions.”

Meanwhile, back in Canada, the RCMP announced that, after months of speculation, Canadian taxpayers have been footing the bill for some of Harry Meghan’s security detail since they arrived in B.C. in November 2019, but that will stop with their change in status.

On April 1, Harry and Meghan have to drop the word royal from their lives because of  “specific U.K. government rules surrounding use of the word,” according to a lengthy update published Feb. 21 on their website  sussexroyal.com about their “Spring 2020 Transition.” The whole point of the royal exit is laid bare, where they explain it will remove “the supposed ‘public interest’ justification for media intrusion into their lives.”

The Queen gave them permission to “earn their own income and the ability to pursue their own private charitable interests,” which will be reviewed in a year.

In the communique, Harry makes it clear that although he and Meghan  have agreed to step back from royal duties, they keep their HRH titles – even though they won’t “actively use” them – and the order of succession is unchanged. In other words, he’s still a prince who is sixth in line to the throne. The couple will also keep their patronages, which include president and vice-president of The Queen’s Commonwealth Trust, as well as the Invictus Games Foundation, Sentebale and the Royal Marines for him and the National Theatre and Association of Commonwealth Universities for her. Harry retains his military rank of major, as well as honorary ranks of lieutenant commander and squadron leader.

The couple noted applications for sussexroyal global trademarks have been withdrawn, and they are working on a new non-profit organization. In Spring 2020, their digital channels will be “refreshed” as they introduce “the next exciting phase, ” the statement reads.

Once a Royal, Always a Royal

No matter what name they choose, Prince Harry will always be a member of the Royal Family. He will always be the Queen’s grandson, Prince Charles and Diana’s son, and Prince William’s brother. Just as Diana was an egalitarian who made sure her boys got a taste of normal life with trips to McDonald’s and Disney World, Harry is his mother’s son, stirring up the monarchy and balking against the rules, not to mention the intense media scrutiny every working royal faces.

Even Diana, according to her former butler Paul Burrell, was considering a move to California just before her 1997 death in a Paris car crash and had picked out a house in Malibu where she had rooms for Harry and William. According to a Jan. 13 InsideEdition interview with Burrell, Diana told him: “I’m buying this house to give William and Harry a new perspective on life.” When asked what Diana would say to Harry and Meghan now, he replied: “She would embrace Harry and Meghan and tell them, ‘Do your thing. Do what makes you happy.'”

What makes Harry happy is living on Vancouver Island, out of the spotlight, with Meghan and nine-month-old Archie. Although he will no longer be a working royal, he is still dedicated to the military community and his beloved Invictus Games, an athletic competition he founded in 2014 for wounded, injured and disabled veterans and military personnel.

As Harry wraps up his last royal appearances, his second stop will be at London’s Abbey Road Studios on Friday, where he will join Bon Jovi to record a new version of the American rocker’s  song “Unbroken” with the Invictus Choir, with proceeds going to the Invictus Games Foundation.

They’ve been working together on a new version of the song the New Jersey rocker wrote for a documentary on soldiers with PTSD, which he sent to Harry in August and suggested it could be recorded to benefit the games, which will be held in The Hague, Netherlands, from May 9 to 16. Harry announced it in video of a joke “text” exchange between the two on Instagram.

“I thought, for the Invictus Games, this could be something very powerful… and he contacted me,” Bon Jovi said. “And in light of everything that has gone on in his life, for him to be coming back and this to be the first thing on his docket, I think was pretty special.”

See video of the Duke of Sussex and Bon Jovi in the recording studio below.

Don’t forget Harry and Meghan made their first official public appearance together at the Toronto games in 2017,  where she was filming the TV series Suits. They were photographed holding hands in the stands, and Harry planted a chaste kiss on her cheek at the closing ceremonies.

Now, with Meghan joining Harry in London on March 5 at the Endeavour Fund Awards,  the world will be watching to see how they’ll be received during their final appearances as senior royals.

Some British tabloids are reporting that royal insiders are worried the Sussexes’ U.K. appearance could steal attention from Prince William and Kate Middleton’s diplomatically important Ireland visit from March 3 to 5.

Harry and Meghan will attend several other events together, including the Mountbatten Music Festival on March 7, an International Women’s Day event on March 8 and the Commonwealth Day service on March 9 with the rest of the Royal Family.

You can bet that the body language will be closely scrutinized at that last event, and every look given or avoided will be endlessly discussed.

But this is the exalted Royal Family, even if that does now include Just Harry and Just Meghan (and presumably Just Archie).

Don’t expect anything but the utmost decorum all around, stiff upper lip and all that, chin up, keeping calm and carrying on.

No doubt the Just Sussexes will be reminding themselves, “It’s just for one day.”