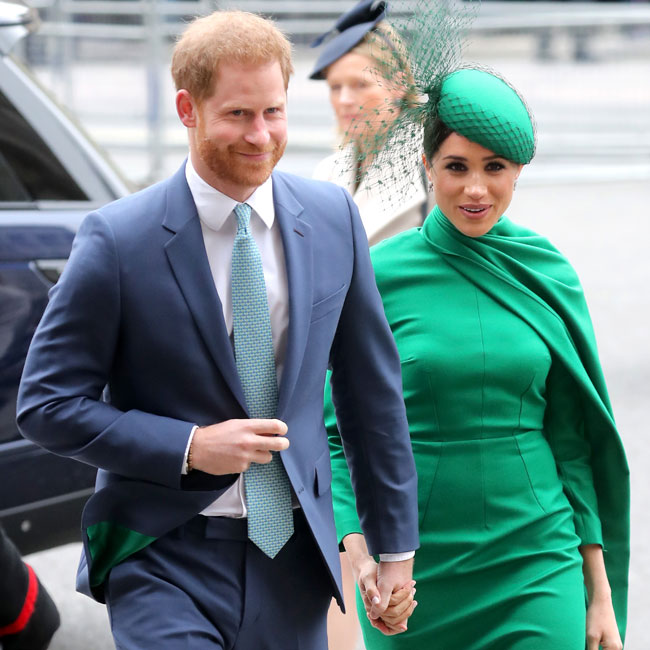 Prince Harry, Duke of Sussex and Meghan, Duchess of Sussex arrive at the Commonwealth Day Service in London, where the Queen made sure there were separate entrances, with the Sussexes following the Cambridges into Westminster Abbey. Photo: Chris Jackson/Getty Images

The Duke and Duchess of Sussex made their final official appearance as royals at the multi-faith Commonwealth Service at Westminster Abbey on Monday after a flurry of formal events in the preceding days on behalf of the Queen.

The Sussex farewell tour offers some closing punctuation to a period of great upheaval in the House of Windsor. Since Harry and Meghan pulled the ripcord on life as senior royals with their bombshell announcement of their intended “step back” on Jan. 6, the Queen and Palace courtiers have moved swiftly to contain the Sussexit fallout, especially imperative because the Firm was already battling scandals on several fronts.

The awkward and public nature of the Windsor family breach included unsanctioned social media salvos launched by the internet-savvy Sussexes, with pre-emptive strikes and hopeful half-in/half-out plans that were later deemed unworkable, followed in turn by tart “clarifications.” It meant the palace, press and public were braced yesterday for any signs of animosity on the one hand or warmth on the other. This was the first time the senior royals – Her Majesty the Queen, the Prince of Wales and Duchess of Cornwall, the Cambridges and the caught-in-the-crossfire Wessexes – have been in public view since the Remembrance Sunday services in November before Harry, Meghan and Archie decamped for their long Christmas vacation in British Columbia.

Commonwealth Day is rich with meaning for the Queen and for the Sussexes: the alliance of 54 countries representing some 2.4 billion people, working together on environmental, social and democratic goals is a signature passion and accomplishment of the Queen’s long reign. Around the time of Harry and Meghan’s May 19, 2018, wedding – where Meghan wore the state flowers of each Commonwealth country sewn into her veil as a surprise to her in-laws – Her Majesty bestowed the title of vice-president of the Queen’s Commonwealth Trust to Meghan. The U.S. actor, who famously resided in Canada during her pre-Prince days, also succeeded the Queen as patron of the Association of Commonwealth Universities. Harry was already president of the organization, and their major tours to Australia and South Africa were intended to shore up Commonwealth support. They will retain these titles, though Harry will no longer to be Commonwealth Youth Ambassador after March 31. A year ago, at the same ceremony, Will and Kate and Harry and Meghan made a big show of unity  – standing together, chatting and laughing before they proceeded into the ceremony –  to shut down rumours of a rift between the brothers, which were later shown to be true by Harry’s own admission.

Thus the whole charged day was bittersweet. With so many eyes on their interaction, there was a last-minute decision (the palace has not yet given an explanation) that both the Sussexes and Cambridges would be ushered in one by one, meaning the Cambridges followed the Sussexes who followed the Wessexes, rather than being in the Queen’s procession as they were last year. This is a big change from previous years, when the single-digit heirs to the throne arrived with the Queen. (Andrew, benched due to scandal,  it was announced well ahead, would not attend this year, so that took care of the eighth in line for the crown.)

The arrangement meant there was less pressure on the Queen’s grandchildren. Meghan was seen to mouth a “Hi” and a little wave toward the Cambridges, seated next to Prince Charles in the front row of the High Altar, and Harry followed up with a “Hello” himself. In the second row, again, by order of precedence, Harry and Meghan made small talk with Edward and Sophie. For the sartorial record, Meghan stunned in a green Emila Wickstead caped dress and a matching hat with dramatic netting, nude Aquazurra pumps and a green Gabriella Hearst bag. Kate re-wore a favourite deep red Catherine Walker coat, notable because it was the one she wore to church services alongside Meghan and Harry in happier times at Christmas 2018.

Before the day even began, Penny Junor, an oft-quoted royal biographer, had this gem: “It will be fascinating to see how it plays out. I imagine everybody will be on absolutely best behaviour. But goodness knows what they will all be thinking privately.” The rigidity and the ritual of a major royal event made for a smoothing of tensions. Pomp is what the Royal Family does really well. When the interactions are firmly scripted, everyone stays on page. Things tend to get messy beyond the palace gates and away from the steering of courtiers.

For better or for worse, Meghan and Harry have both used their voices to exercise their right of self-determination. We will no doubt strain to see regret or freedom in their words, actions and images in the future. But this is like any family. There are rifts, disagreements, generational misunderstandings and questioning of each other’s values. At the end of the day, it all comes out in the wash. This particular family split is more public than most, but hopefully the last act of playing nicely together on the farewell tour will serve as some inspiration to the rest of us, who squabble behind closed doors. But it spilled into Instagram, where the Cambridges posted a slideshow of the day, which included images of Meghan and Harry. The Sussexes did not reciprocate.

But the Queen made a huge gesture of reconciliation ahead of the ceremony by inviting the Sussexes to join her at church, the Royal Chapel of All Saints in Windsor near their home at Frogmore Cottage on Sunday. It was an opportunity to have some alone time with the couple, a follow-up to her four-hour “clearing the air” lunch with Harry earlier in the week. A master of imagery, the Queen knew a joint church visit would be a clear show of solidarity: without saying a word, she spoke through the invitation. “These two are my family,” it signalled, “and always will be.” This reiterated what she said in a statement, and now she was actually demonstrating it. Meghan, fresh off a series of deft wardrobe wins over this farewell tour, wore a chic black fascinator with netting and a black ensemble. The touch of gravitas served to underscore the Queen’s message.

The Sussexes have certainly put on a great show, taking the high road and staying silent and compliant over the past few days. Harry arrived in London first, ahead of Meghan. After Harry had a few solo outings – to record, with Jon Bon Jovi, “Unbreakable” to raise funds for the Invictus Games Foundation and a trip to the Silverstone Foundation, home of the British Grand Prix with race car legend Lewis Hamilton – Meghan brought the glamour.

Their first appearance together at the Endeavour Fund Awards for wounded veterans who have conquered sporting challenges was a smash. The buzz was mainly thanks to the viral photograph of the two beaming at each other, backlit by flashbulbs and dappled by the rain, a once-in-a-lifetime shot by royal photographer Sam Hussein. Funny, the press they so revile came up with an era-defining image of their last days as royals. Meghan’s turquoise Victoria Beckham sheath dress – a marked and optimistic departure from the black and white looks she wore to the event the past two years – was mirrored by Harry’s tie.

That matching sensibility continued on Saturday night at the Mountbatten Music Festival at Royal Albert Hall. This was Harry’s last opportunity to wear a uniform: part of the separation agreement with the family mandates that he give up his honorary titles and the duds that come with them. (He can still wear his own medals going forward and retains the titles of major, lieutenant commander and squadron commander, earned over his 10-year military career.) He chose the scarlet red mess uniform denoting his 2017 honorary title Captain General of the Royal Marines, which he retains during the year the leaving arrangement is under review. Meghan matched the red exactly in a stunning Safiyaa caped gown with red crystal Simone Rocha earrings, a red satin Manolo Blahnik clutch and red Aquazzura heels. The real moment of note came as they received an extended standing ovation, and Harry was seen to be just barely holding back tears. For the emotional royal, it was a sign that he was giving some pause to reflect on the enormity of this life decision and just how much his military service has meant to him.

Meghan in the Spotlight

The Duchess took a few hits, as the tabloids she sued last fall laid in wait. There was some chatter about the blue Beckham dress being too tight and some more tittering about the way she upstaged Camilla’s year-long-planned speech about domestic violence when the Duchess released photos of her trip to the National Theatre for a private visit a day after the fact.

Meghan will retain that personal patronage – which certainly aligns with her resume and interests – in her new private life.

It had been reported that the avowed and vocal feminist would mark  International Women’s Day by attending British Vogue’s Forces of Change event, inspired by the September 2019 issue she guest edited, which was their best selling of the decade. Instead, she made a  surprise trip to the Robert Clack Upper School  in Dagenham, East London. The Ford plant there was the site of a walkout by female workers  in 1968 that paved the way for the Equal Pay Act. The Duchess met with one of the strikers, Geraldine Dear, telling the students: “This is the best example of no matter how small you feel, how low you may feel on the ladder or the totem pole, no matter what colour you are, no matter what gender you are, you have a voice and you certainly have a right to speak up for what is right.”

This is where the Duchess went off script and invited “one brave young man” to come to the stage  and tell the assembly what International Women’s Day meant to him.

Student Aker Okoye was indeed brave enough to lean in for a “cuddle,” before turning to the cameras to tell the world “she’s beautiful, innit” as Meghan playfully wagged a finger at him.

This is the charm and spontaneity that was such a breath of fresh air for the Royal Family during Meghan’s first royal walk-abouts when she moved to London in 2017. Their engagement interview was peppered with can-do Americanisms like getting “boots on the ground” and “hitting the ground running.” She took on a prodigious amount of royal duties in record time, with the Queen remarking in one of her Sussexit statements how proud she was that Meghan so quickly became a part of the Firm. But it was not to last.

British newspapers tallied up the total number of days that Meghan will have spent as a royal when she and Harry exit the ranks on March 31. The 682 days of royal Meghan – one year, 10 months, 12 days – since the glittering Windsor wedding have been eventful and filled with highs and lows and a lot of screaming newspaper headlines.

But this is what we know. This last round of engagements shows how wonderful they were at the performative part of the royal role. The wattage they brought as a team was made for global celebrity. So whether their next chapter starts on Vancouver Island or at a house in Malibu, the Sussexes – or the Mountbatten-Windsors or whatever they decide to call themselves –  will go off into the New World sunset, finally choosing their own roles in life.