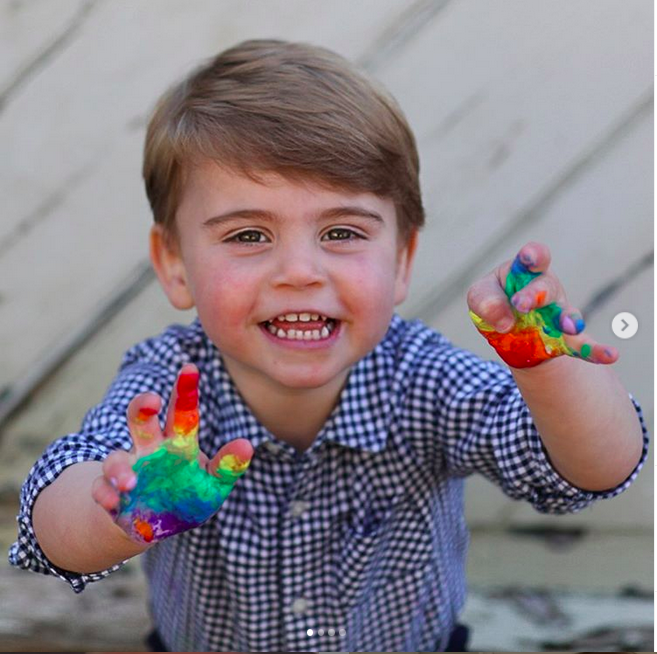 This photo taken of Prince Louis, who turns 2 today, shows the Prince with rainbow-coloured paint on his hands. The rainbow has become a symbol of hope in Great Britain during the COVID-19 crisis. Photo: Catherine, the Duchess of Cambridge/KensingtonRoyal/Instagram

Happy second birthday, Prince Louis! To mark the occasion, the Duke and Duchess of Cambridge have released charming new photographs of their youngest child who is shown with rainbow-coloured paint on his hands. During the COVID-19 crisis, children in the U.K. have been painting pictures of rainbows and displaying them on their windows or drawing them in chalk on sidewalks as a message of hope to passersby that this storm, too, shall pass. And today, the palace thanked people for their birthday wishes, sharing an “Instagram vs Reality” post on Twitter of the young prince’s face and hands covered in paint. It has become a welcome tradition for the Duchess to take photos of her royal brood’s birthdays and other special occasions. A talented amateur photographer, she is also patron of the Royal Photographic Society, a role previously held by the Queen for 67 years.

Prince Louis has joined his family – and millions of Brits – as they step to their doorstep each week, wearing National Health Service (NHS) blue, to participate in “Clapping for Carers” to praise everyone from frontline healthcare workers to shop workers who are risking their lives to keep the country going.  In this new video, the Duke and Duchess and all of their children pay tribute to essential workers for the efforts in fighting the coronavirus.

And last month, on March 23 , Prince Louis was seen putting his hands together in support of NHS, along with his older siblings, Prince George, six, and Princess Charlotte, who will turn five next month. To date, the coronavirus has claimed more than 18,000 lives in the country, according to the latest figures from Johns Hopkins University. Last year, the Royal Family also released a snap of Prince Louis, taken by his mother, to mark his first birthday. Prince Louis, who is fifth in line to the throne, made his first public appearance  outside the Lindo Wing of St. Mary’s Hospital in London. He arrived at 11:01 a.m. (Western European Time) on Monday, April 23, 2018, weighing a healthy 8 pounds, 7 ounces.