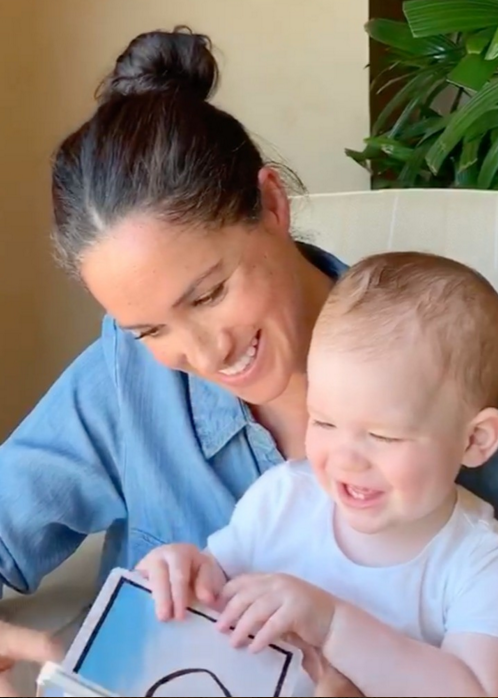 In a video posted on Instagram, filmed by Prince Harry, Meghan reads to Archie from the popular 2009 book Duck! Rabbit! The couple encouraged fans to donate to the charity Save the Children. Photo: @SaveChildrenUK/Instagram

In honour of baby Archie’s first birthday, proud parents the Duke and Duchess of Sussex have released a new video via the official Instagram feed of the charity, Save the Children. The video, filmed by Prince Harry, shows Archie on his mother’s lap as she reads one of his favourite books, Duck! Rabbit! by Amy Krouse Rosenthal with an Archie’s Book Club sticker on the cover, gifted to him by Oprah along  as part of a collection of books given as a “welcome to the world” present last year.

The book, which features a series of drawings of an animal with either a long bill or a long pair of ears, plays on an optical illusion: is it a duck or a rabbit? It depends, of course, on how you look at it. The characters in the book argue over the creature’s identity, but the correct answer is never resolved.

It is, as it turns out, an age-old question. As Jack Malvern writes in The Times (UK), the duck or rabbit dilemma was once posed by the Austrian philosopher Ludwig Wittgenstein. “The visual trick was first circulated in a German magazine before it was seized upon by Wittgenstein to demonstrate ‘aspect perception,'” Malvern writes, “meaning that people can interpret things in different ways depending on the concepts they associate with them.”

In the video, Meghan calls her son Arch, revealing her nickname for him, as Harry could be heard chuckling in the background. To mark Archie’s milestone, the couple teamed up with Save the Children to raise funds for children affected by the coronavirus pandemic. The video was subsequently released to a story-oriented American offshoot of the charity on the @savewithstories Instagram account. This initiative, which features celebrities reading to children, was spearheaded by Jennifer Garner and raises funds to support food banks and community feeding programs, as well as a number of educational initiatives.

Jennifer Garner thanked the Sussexes by posting this message on Instagram:

Thank you for sharing your gorgeous son with the world and allowing us to join you in celebrating his first birthday.
.
We are humbled and grateful that you chose @savewithstories to mark this special day and in so doing – have raised the visibility of @savethechildren’s work in the US and UK and have helped feed and educate children in desperate need of both.
.
More than anything – watching you lovingly talk through the pictures while your clever Archie turns the pages – lifts all of us up and reminds us that what may seem like a duck just might turn out to be a rabbit. Thank you for this joyful and meaningful shift in perspective.

It was recently revealed that Harry and Meghan’s American-based non-profit to replace their now defunct British foundation, SussexRoyal will launch under the name Archewell. The new philanthropic organization will be a many-pronged entity, involving multi-platform content for education, training and entertainment; health, mental health and emotional support services and counselling as well and volunteering and mentoring.

In a statement to The Telegraph, the couple said: “Before SussexRoyal came the idea of Arche – the Greek word meaning ‘source of action.’ We connected to this concept for the charitable organization we hoped to build one day, and it became the inspiration for our son’s name. To do something of meaning, to do something that matters. Archewell is a name that combines an ancient word for strength and action and another that evokes the deep resources we must draw on upon. We look forward to launching Archewell when the time is right.” Archie was last pictured in December when the family was staying on Vancouver Island.

Birthday wishes poured in today from the Royal Family. The Queen and Prince Philip shared this message on their social media accounts: “Happy Birthday to Archie Mountbatten-Windsor who is celebrating his 1st birthday today! Archie is The Queen’s eighth great-grandchild.” The caption was accompanied by a photograph of Archie taken at Windsor Castle two days after his birth. Prince Charles also expressed birthday wishes for his grandson on his official @ClarenceHouse Instagram feed, saying, “A very Happy Birthday to Archie, who turns one today.” The black and white portrait of Archie and his grandfather was taken following his christening at Windsor Castle in July 2019. The Duke and Duchess of Cambridge also shared a photo from Archie’s christening, posting a family portrait with the caption: “Wishing Archie a very happy first birthday today!” What a whirlwind first year it was for little Archie, who has already lived in three countries. Over Christmas, he and his parents left Frogmore Cottage in Windsor for an extended stay in a rented home on Vancouver Island and then, in March, they moved to Los Angeles, Meghan’s hometown. Last year, Archie also accompanied his parents on a royal tour to Africa. Prince Harry and Meghan stepped away from senior royal duties earlier this year.

Archie Mountbatten-Windsor was born on May 6, 2019, at the Portland Hospital in London. He is the Queen’s eighth great-grandchild and is seventh in line to the throne.