“Never Give Up, Never Despair”: The Queen’s V-E Day Message Resonates 75 Years After the War 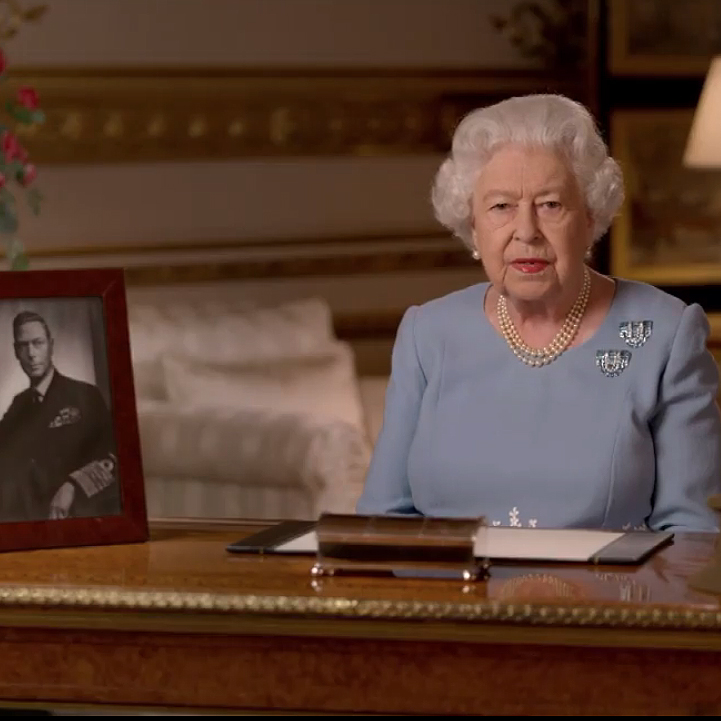 Queen Elizabeth II was surrounded by war mementos, including a framed photo of her father, King George VI, in his Admiral of Fleet uniform and RAF wings. Photo: Instagram

Queen Elizabeth II was a 19-year-old princess when her father, King George VI, declared the war in Europe was over, but 75 years later, she recalled the exuberant national holiday as if it were yesterday.

“I vividly remember the jubilant scenes my sister [Margaret] and I witnessed with our parents and Winston Churchill from the balcony of Buckingham Palace,” the monarch said in a televised speech that aired on BBC One’s VE Day 75: The People’s Celebration. “The sense of joy in the crowds who gathered outside and across the country was profound.”

But that day came with great sacrifice, as more than 384,000 British soldiers and 70,000 civilians lost their lives in what she called “a total war.” More than a million Canadians served country and Queen, and there were 44,090 casualties.

“At the start, the outlook seemed bleak, the end distant, the outcome uncertain. But we kept faith that the cause was right – and this belief, as my father noted in his broadcast, carried us through,” she said, referring to the King’s radio address to the nation on May 8, 1945.

The Queen’s address was recorded at Windsor Castle, where she and Prince Philip have been in self-isolation since she left London on March 19 and he flew in from Sandringham to join her ahead of Easter. She was surrounded by wartime mementos, including a framed photograph of King George VI in his Admiral of Fleet uniform and RAF wings, taken in 1943 by famed Canadian portrait photographer Yousuf Karsh. Behind her is a picture of the Royal Family celebrating VE Day from the balcony of Buckingham Palace. And on the desk is the khaki Auxiliary Territorial Service cap she wore in 1945 when she entered service as a mechanic and driver.

She wore two art deco-style, diamond-and-aquamarine brooches that were a gift from her father on her 18th birthday in April 1944, made by famed French luxury jewellers Boucheron.

“Never give up, never despair – that was the message of VE Day,” the Queen said, going to acknowledge the coronavirus pandemic may have put a damper on this year’s celebrations, but Britons would remember its wartime heroes from their homes and doorsteps.

“But our streets are not empty; they are filled with the love and the care that we have for each other. And when I look at our country today, and see what we are willing to do to protect and support one another, I say with pride that we are still a nation those brave soldiers, sailors and airmen would recognize and admire.”

The BBC One musical program concluded with a national singalong to Vera Lynn’s wartime classic, We’ll Meet Again. Known as the “Forces’ Sweetheart,” Lynn, who turned 103 on March 20, was shown singing in a virtual duet with Welsh mezzo-soprano Katharine Jenkins, who was recorded at an empty Royal Albert Hall. Jenkins was joined by schoolchildren, nurses in a hospital hallway, military men and women, pizza makers and subway workers, all singing along.

The song, which became a war-time classic after it was released in 1939, has special significance in the United Kingdom, where it became emblematic of the country’s yearning for a return to normalcy and hope that they would see their loved ones again. Soldiers, who heard it  in the trenches and in hospitals, said it brought tears to their eyes.

The Queen referenced the song in her April 5 coronavirus speech, which was only the fifth time she has addressed the nation outside of her annual Christmas Day broadcast. Today’s speech was the sixth.

In the April 5 address, after thanking the National Health Service and all workers putting their lives on the line to keep the country going, she reminded listeners they had lived through similar hardships, including the “painful sense of separation from their loved ones,” and persevered.

Lynn rereleased the song in March as a duet with Jenkins, and the 2020 version quickly began climbing the charts and topping download lists on music-streaming services.

The Queen’s Victory in Europe speech began at 9 p.m., the exact hour to the day 75 years ago when her father gave his VE Day speech to the nation, announcing the end of “nearly six years of suffering and peril” in a radio address.

“Much hard work awaits us, both in the restoration of our own country after the ravages of war and in helping to restore peace and sanity to a shattered world,” the King said, noting the war continued in the Far East, where U.S.-led Allied forces were battling the Japanese. Although the Second World War was over in Europe, it wouldn’t come to its final, horrific conclusion until August 14, when the Japanese Emperor surrendered after Americans dropped atomic bombs on Hiroshima and Nagasaki, immediately killing more than 100,000. The radioactive fallout killed tens of thousands more.

After the Prime Minister announced Germany’s surrender on May 8, 1945, Britons danced in the streets, and the Royal Family appeared on the balcony of Buckingham Palace to greet everyone eight times as the crowds repeatedly called on them to come out during the afternoon and evening. Princess Elizabeth – whom her father called “Lilibet” – Princess Margaret and their friends were allowed to join the throngs outside after dark, a moment the Queen later said was “one of the most memorable nights of my life.”

Today, due to the coronavirus pandemic lockdown, residents set up lawn chairs in driveways and waved the Union Jack from a safe, two-metre distance.

The celebrations started in the morning with a flypast by the Royal Air Force’s aerobatic team, the Red Arrows, whose nine jets left plumes of red, blue and white contrails in the sky above Buckingham Palace. The BBC broadcast war-time Prime Minster Winston Churchill’s May 8 victory speech at 3 p.m., where he praised the Russians and the Americans for joining the fight against Nazi Germany.

“Finally, almost the whole world was combined against the evil-doers who are now prostrate before us,” Churchill said. “Gratitude to our splendid Allies goes forth from all our hearts.”

The Duke and Duchess of Cambridge joined veterans for a very special #VEDay75 party at @RoyalBritishLegion’s Mais House Care Home. On the 75th anniversary of VE (Victory in Europe) Day, we pay tribute to the service of the entire #WW2 generation — from British, Commonwealth and Allied Forces to evacuees and those who served on the home front. Visit The Royal Family YouTube channel to see more from the party…

Camilla, Duchess of Cornwall and Prince Charles observed two minutes of silence at the Balmoral War Memorial in Scotland, where a lone piper played as Charles laid a wreath and Camilla put down a bouquet of flowers gathered from the grounds of Balmoral Estate. She wore the 12th Royal Lancers regimental brooch in honour of her father, Major Bruce Shand, who served in France. Her message read: “In memory of my darling father and all the officers and men of the XII Lancers, who fought so bravely to give us peace.”

Clarence House social media accounts posted video of Camilla reading from her father’s book about his war-time experiences and Charles sharing excerpts from the diary kept by his grandfather, King George VI, who said Churchill had come to lunch and they had congratulated each other on the end of the war in Europe.

“The day we have been longing for has arrived at last,” the King wrote on  May 8, 1945. “We can look back with thankfulness to God that our tribulation is over. No more fear of being bombed at home and no more living in air raid shelters. ”

The Royal couple has been self-isolating at Birkhall, their cottage on the grounds of Balmoral Castle, since they arrived there from London on March 22. That’s when the Prince of Wales, 71, started showing symptoms of COVID-19, with the diagnosis confirmed on March 25. The Duchess of Cornwall was tested, but her results were negative.

Prince Charles is the only member of the British Royal Family to be infected with the coronavirus, but in a statement, Clarence House said it was impossible to say where he got it “owing to the high number of engagements he carried out in his public role during recent weeks.”

In a video posted on the Clarence House Instagram and Twitter accounts, the future king announced on April 1 that he was “on the other side of the illness.”

British Prime Minister Boris Johnson did not get off as lightly. After he was diagnosed with COVID-19, he ended up in the intensive care unit on oxygen, with doctors telling him at one point they discussed intubating him and were making plans to announce his death if he didn’t recover.

In his VE Day address to the country on Friday morning, Johnson remembered how the U.K. and Commonwealth countries were the only nations who fought Hitler from the beginning to end of the Second World War “without being defeated or occupied.”

He paid tribute to the “heroism of countless ordinary people,” many of whom are elderly today, “but once carried the fate of freedom itself on their shoulders.”

Johnson said the new invisible enemy, the coronavirus that causes COVID-19, “demands the same spirit of national endeavour,” and that means no parades and street parties.

The Prime Minister quickly brought the focus back to the veterans and civilians who helped defeat the Nazis, saying everyone who has been born since 1945 will forever be indebted.

“We owe everything we most value to the generation that won the Second World War. Today we celebrate their achievement, we remember their sacrifice and we take pride in being their compatriots. We are a free people because of everything they did and our gratitude will be eternal. “