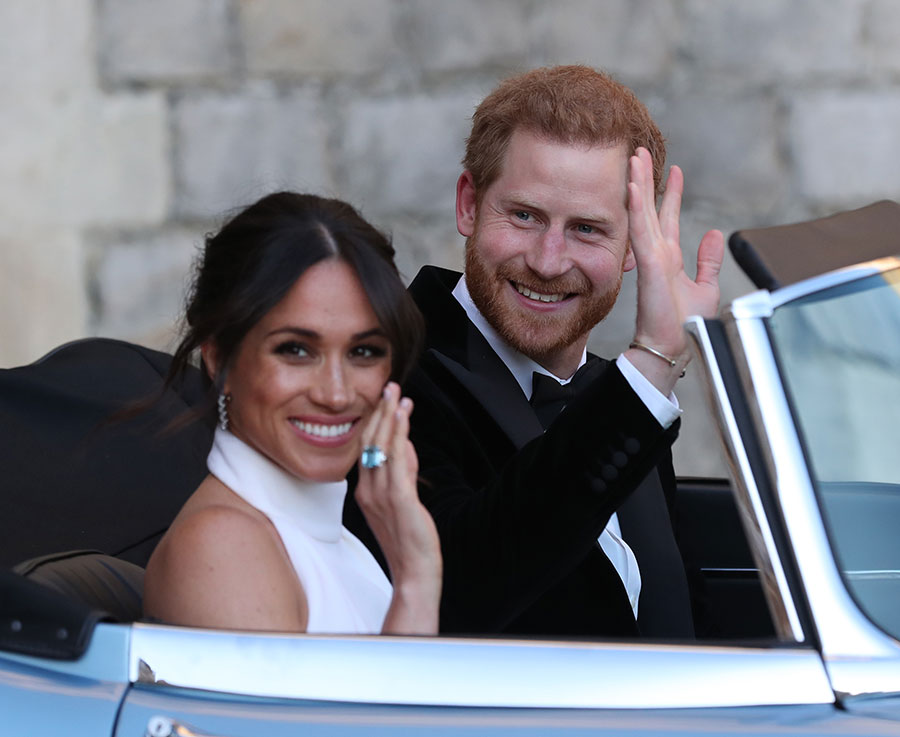 Duchess of Sussex and Prince Harry, Duke of Sussex wave as they leave Windsor Castle after their wedding to attend an evening reception at Frogmore House. Photo: Steve Parsons/WPA Pool/Getty Images

Two years ago today, Meghan Markle wed her prince. Resplendent in a white, silk, Givenchy dress with a five-metre-long tulle veil embellished with the national flowers of all 53 Commonwealth countries, the bride walked down the aisle of St. George’s Chapel at Windsor Castle on the arm of her father-in-law, Prince Charles, to meet Harry at the altar.

Two little Canadians, Brian and John Mulroney – sons of her best friend, stylist Jessica Mulroney – played a part, as they held the end of the bride’s crowning glory as she walked up the steps into the chapel.

More than 1.9 billion people around the world watched the fairytale wedding, which was very inclusive of Meghan’s African-American heritage, with a speech by a Black Episcopal bishop, Chicago’s Michael Curry, and a gospel choir singing “Stand By Me.”

Just three days later, the couple attended the first of many Royal engagements, appearing at a garden party in honour of Prince Charles’ 70th birthday.

By the time their first wedding anniversary rolled around, they were new parents – baby Archie Mountbatten Windsor was born May 6 – and marked the occasion by releasing 14 behind-the-scenes wedding snaps on their @SussexRoyal Instagram account in a slideshow accompanied by a recording of the Kingdom Choir singing “This Little Light of Mine” at their recessional.

Happy one year anniversary to Their Royal Highnesses, The Duke and Duchess of Sussex! Today marks the one year anniversary of the wedding of The Duke and Duchess of Sussex. Their Royal Highnesses exchanged vows at St George’s Chapel within the grounds of Windsor Castle on May 19th, 2018. The selected song “This Little Light of Mine” was chosen by the couple for their recessional. We hope you enjoy reliving this moment, and seeing some behind the scenes photos from this special day. A message from The Duke & Duchess: Thank you for all of the love and support from so many of you around the world. Each of you made this day even more meaningful. Photo credit: Chris Allerton/Joe Short (B&W); PA (color) ©️SussexRoyal (B&W images and video)

But their second anniversary marked a new chapter in Harry and Meghan’s drama-filled fairytale. The @RoyalSussex account was shuttered, with the last post on March 30 containing a farewell from the couple after they renounced their ties to the Royal Family and started life as independent citizens.

The Sussexit, as some internet wags dubbed it, was rooted in Harry’s fear the press scrutiny Meghan was enduring was too similar to that experienced by his mother, Diana, whose life was cut short in 1997 when she and boyfriend Dodi Fayed and their driver were killed in a Paris car crash as they were being pursued by the paparazzi.

“My deepest fear is history repeating itself. I’ve seen what happens when someone I love is commoditised to the point that they are no longer treated or seen as a real person,” Harry said in the Oct. 1 statement posted on both sussexoffical.uk and royal.uk websites.  “I lost my mother and now I watch my wife falling victim to the same powerful forces.”

Prince Harry’s statement came on the second-last day of their 10-day Royal tour of southern Africa after Meghan sued the owners of the Mail on Sunday tabloid newspaper for “the misuse of private information, infringement of copyright and breach of the Data Protection Act 2018.” The statement of claim filed in the Chancery Division of the High Court was related to the publication of parts of a private letter from Meghan to her estranged father, Thomas Markle, just after she married.

“Wishing you all a very Happy New Year and thanking you for your continued support! We’ve loved meeting so many of you from around the world and can’t wait to meet many more of you next year. We hope 2020 brings each of you health and continued happiness.” – The Duke and Duchess of Sussex Special thanks to Chris Martin and @Coldplay for allowing us to use one of their songs Photo and video © SussexRoyal Thanks to PA for additional images and footage

After spending Christmas and New Year’s on Vancouver Island with Archie, Harry and Meghan used their Instagram account on Jan. 8 to announce, in an apparent blindside to the Royal Family, that they wanted to “carve out a progressive new role within this institution,” and “step back as ‘senior’ members of the Royal Family and work to become financially independent, while continuing to fully support Her Majesty The Queen.” Ten days later, after negotiations with the Queen, the details were announced: Harry and Meghan would keep their titles as Duke and Duchess of Sussex, but lose the HRH designation; they would no longer accept any public funds; and they had to repay the $4-million taxpayer-funded bill for the renovations they made to Frogmore Cottage.

The couple had a farewell tour of sorts in early March, culminating on the 9th with their last official Royal engagement at the Queen’s multi-faith Commonwealth Service in Westminster Abbey. After returning to Vancouver Island, they quietly packed their bags and moved to Meghan’s hometown of Los Angeles, where her mother, Doria Ragland, lives. They’ve been in lockdown in Tyler Perry’s Beverly Hills mansion, only venturing out – in masks –to help deliver food to the underprivileged.

On Archie’s first birthday, they released a heart-warming video to support the charity Save the Children, with Meghan reading the children’s book “Duck! Rabbit!” to her son as the baby grabbed at the pages to turn them and put the book in his mouth at the end.

But today, the Royal Family’s Instagram was devoid of any mention of Harry and Meghan’s second anniversary, instead featuring pictures of the Queen at past garden parties. Cancelled this year due to the COVID-19 pandemic, the text noted today would have been the season’s second garden party at Buckingham Palace, which has now been rescheduled to 2021. Now the lawsuit that seemed to prompt Sussexit is heating up. On May 1, a London high court judge struck down some of Meghan Markle’s claims against the  Mail on Sunday over excerpts it published from an anguished letter she wrote to her estranged father after he didn’t come to her 2018 Windsor Castle wedding to Prince Harry. Thomas Markle leaked the handwritten letter to the newspaper.

Justice Mark Warby allowed the central claim against the Mail on Sunday and its parent company, Associated Newspapers, to stand: The newspaper violated the Duchess of Sussex’s privacy when it published parts of the letter in February 2019.

In a 33-page decision, the judge said he would not rule on whether the newspaper had acted dishonestly by omitting parts of the letter; contributed to the rift between Meghan and her father; and had a malicious agenda to portray her in a negative light.

Meghan’s law firm said it would not appeal the ruling and press on with the case, which could see the Duchess and her father testify against each other when it goes to trial, likely later this year or in early 2021.

In a statement, Schillings law firm said the central argument still stands. “The duchess’s rights were violated; the legal boundaries around privacy were crossed.”

The world now awaits Harry and Meghan’s book, Finding Freedom, written by journalists Omid Scobie, a U.S. editor with Harper’s Bazaar, and Carolyn Durand, a U.K.-based contributor to websites for both Elle magazine and Oprah magazine. Due to be published Aug. 11 by HarperCollins, the publisher promises the book will “go beyond the headlines to reveal unknown details of Harry and Meghan’s life together, dispelling the many rumours and misconceptions that plague the couple on both sides of the pond.”

Meanwhile, Harry and Meghan spent a quiet day in Los Angeles, with Scobie citing “a source close to the couple,” who said they will spend “quality time with one another and as a family.” There are no meetings or calls in the diary, and, since they are on lockdown like everyone else who is doing their part to stop the spread of COVID-19, Scobie reports that they are “feverishly working away behind the scenes” to launch their new charitable initiative, called Archewell.

They Did! All The Highlights From the Royal Wedding