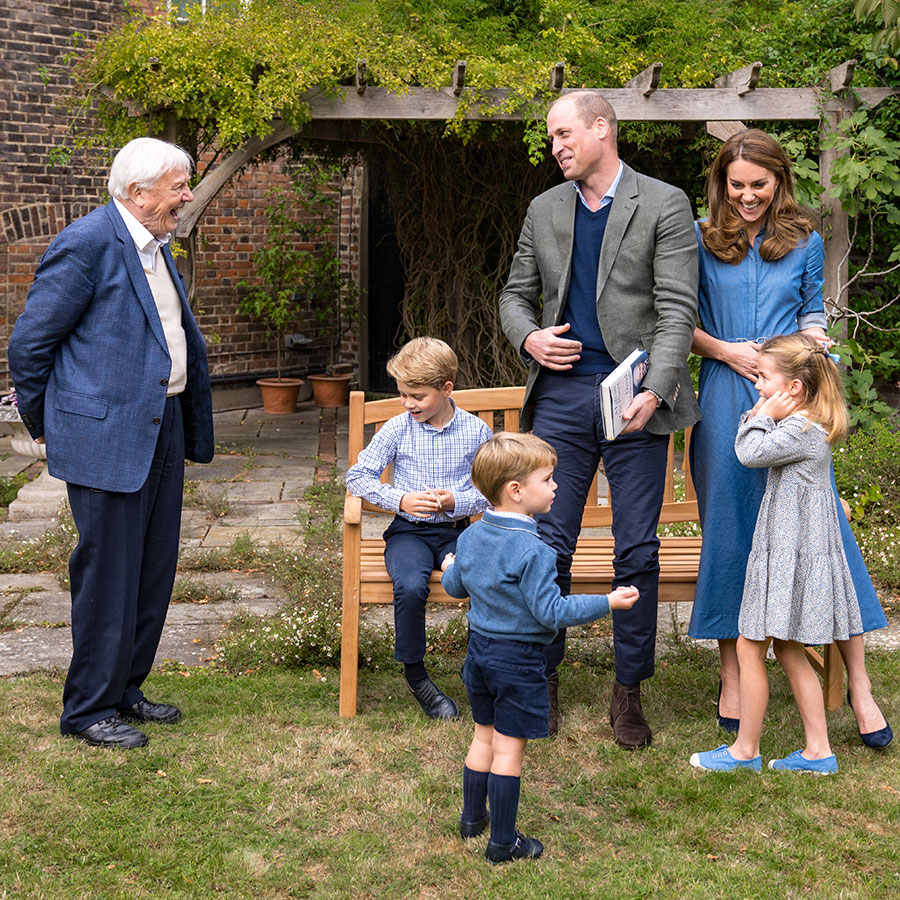 When most people have an itch to check out some historical artefacts, they have to go to the museum — an increasingly difficult thing to do during the ongoing pandemic. But for members of the Royal Family, sometimes the historical artefacts are delivered to their doorstep — and by one of the most renowned natural historians on the planet no less.

Last week, famed British broadcaster and naturalist Sir David Attenborough arrived for a Kensington Palace visit with the Duke and Duchess of Cambridge and their family. And while there, the 94-year-old gifted Prince George with a fossil tooth from a giant shark called Carcharocles from the Miocene period some 23 million years ago. The young prince was all smiles as he looked at the fossil, which Sir David found while on a family holiday in Malta during the 1960s — the same island George’s great-grandparents, Queen Elizabeth and Prince Philip, called home as newlyweds in the late 1940s through the early 1950s during the prince’s service on the HMS Chequers.

Kensington Palace released photos of Attenborough with his royal hosts.

But Attenborough wasn’t just at Kensington Palace to hand out fossils. Last week marked Climate Week NYC 2020, and it kicked off with the announcement of a new documentary, Prince William: A Planet For Us All. Filmed more than two years ago, it features Prince William championing “global action on conservation and climate change.”

“I’ve always loved nature, but fatherhood has given me a new sense of purpose,” William said in a voiceover. “Now I’ve got George, Charlotte, and now Louis in my life. Your outlook does change. You want to hand over to the next generation the wildlife in a much better condition.”

A Planet For Us All also features a meeting between the Duke and Duchess of Cambridge and Attenborough.

“The children were very upset that we were coming to see you and they weren’t coming,” Duchess Kate told Attenborough in the film. “They’re massive fans of yours.”

But luckily for the Cambridge kids, they did get to see him after all, following a personal, outdoor screening of the upcoming feature film David Attenborough: A Life On Our Planet attended by Prince Willam and Attenborough.  For the screening, directors’ chairs were personalized with their names, but the Duke of Cambridge and Sir David decided to sit in each other’s seats. In addition, Attenborough added the above photo of himself watching the film with Prince William to his brand new Instagram account. Yes — Attenborough not only joined the social media site last week, but broke Friends star Jennifer Aniston’s Guinness World Record for the fastest person to reach one million Instagram followers, accomplishing the feat in a little over four hours.

Prince William, meanwhile, had previously interviewed Attenborough in 2019 at the World Economic Forum, where the latter was honoured with a Crystal Award, given annually to artists and cultural figures “whose leadership inspires inclusive and sustainable change.”

All in the Royal Family

Prince William, of course, has been long committed to environmental causes. In 2013 he stepped away from the Royal Air Force to focus his efforts on conservation and founded United for Wildlife, which supports initiatives to protect endangered species and fight wildlife trafficking. He is also patron of TuskTrust which tackles illegal wildlife trade and works on conservation efforts. And in October, William will also reportedly make his TED Talk debut on a star-studded climate change panel, joining actor Chris Hemsworth and former U.S. Vice President and Democratic presidential  nominee Al Gore on the virtual conference.  After Gore lost the election in 2000, he went on to become a prominent author and environmental activist, whose work in combatting climate change earned him (jointly with the Intergovernmental Panel on Climate Change) the Nobel Peace Prize in 2007. Gore was also the subject of the Academy Award-winning documentary An Inconvenient Truth.

But environmentalism runs in the royal family. William’s grandfather, Prince Philip, served as patron of many environmental organizations and, famously, co-founded and presided over the World Wildlife Fund. And, of course, his brother, Prince Harry, has also spoken out passionately for the environment, expressing his concern about climate change deniers.

While on a 10-day royal tour to southern Africa last year with Meghan Markle (their last before retiring from their duties as senior royals in January), Prince Harry was quoted as saying, “I genuinely don’t understand how anyone in this world, whoever we are — you, us, children, leaders, whoever it is — no one can deny science. Otherwise we live in a very, very troubling world.”

Both Harry and Meghan have also shown support for 17-year-old climate activist Greta Thunberg, with Meghan featuring the teenager on the cover of her guest-edited issue of British Vogue last year. And last year, Harry announced a new initiative dubbed Travalyst — an organization that partners with travel providers and that is “aimed at improving conservation, environmental protection and expanding local community economic development by encouraging sustainable tourism practices across the travel industry.”

That, however, was met with nearly immediate backlash amidst earlier reports that Harry and Meghan took multiple private jet trips the summer prior to the announcement including to visit Elton John in France. The rocker, 73, defended the royal couple at the time, stating that, “To support Prince Harry’s commitment to the environment, we ensured their flight was carbon neutral, by making the appropriate contribution to Carbon Footprint,” an organization that “funds solutions to reducing carbon emissions now.”

But of all the royals, it’s perhaps Prince Charles who has most fiercely championed environmental causes. The 71-year-old Prince of Wales, of course, has been an ardent environmentalist for years, a passion that, at times, bordered on the political — which violates the royal rule of maintaining neutrality in politics. But most of the world has caught up to Charles on the environmental front in recent years, and last week he kicked off Climate Week NYC with an impassioned speech challenging business leaders and governments to form a global alliance to “overcome the obstacles facing us.” Charles called for nothing less than a “Marshall-like” plan to combat the climate crisis, saying the threat posed by global warming will “dwarf the impact of the coronavirus pandemic.”

“At this late stage I can see no other way forward but to call for a Marshall-like plan for nature, people and the planet,” he said, in a reference to the massive U.S.-led economic recovery plan to rebuild Europe after the Second World War.

He added that, “We must now put ourselves on a warlike footing, approaching our action from the perspective of a military-style campaign,” noting that the world had been “pushed beyond its planetary boundaries”, only for the crisis to long be “decried, denigrated and denied” by those in power.

To combat the crisis, the prince’s six-step “Marshall-like plan” calls for national leaders and businesses to embrace carbon pricing and end “perverse” fossil fuel subsidies. The plan also advocates for the scale-up of carbon capture and storage technology; the expansion of a global carbon offset market; the creation of an ecosystems services market which would put a higher value on preserving nature; and lastly, sustainable urban development that protects the environment.

“As momentum and ambition builds, we need to narrow in on the solutions and start working towards real-world implementation,” he said during the World Economic Forum’s Sustainable Development Impact Summit on Thursday.

Prince Charles has long been passionate about environmental issues. He has pushed for a carbon tax and has personally lobbied U.S. Presidents Donald Trump and Barack Obama on policy regarding global warming. In 2015, Prime Minister Justin Trudeau pledged $2.65B to a climate-change fund at the Commonwealth summit in Malta, where he met with Prince Charles outside the conference.

The U.K., Canada and Germany, as well as the EU, have said they will work toward net zero greenhouse gas emissions by 2050, but Charles says this is not good enough.

“2050 simply suggests we have room to delay. It is absolutely vital, given the enormity of the problem we face, that we make truly transformative progress along the road to net zero by 2030.

“Without swift and immediate action, at an unprecedented pace and scale, we will miss the window of opportunity to ‘reset’ for green-blue recovery and a more sustainable and inclusive future. In other words, the global pandemic is a wake-up call we cannot ignore,” he said.

As well, the Prince of Wales also last week launched RE:TV, a web channel which will feature inspiring short films focussed on climate change solutions. Curated by the future king himself, the platform also aims to stop the spread of misinformation on topics ranging from climate change to the coronavirus.