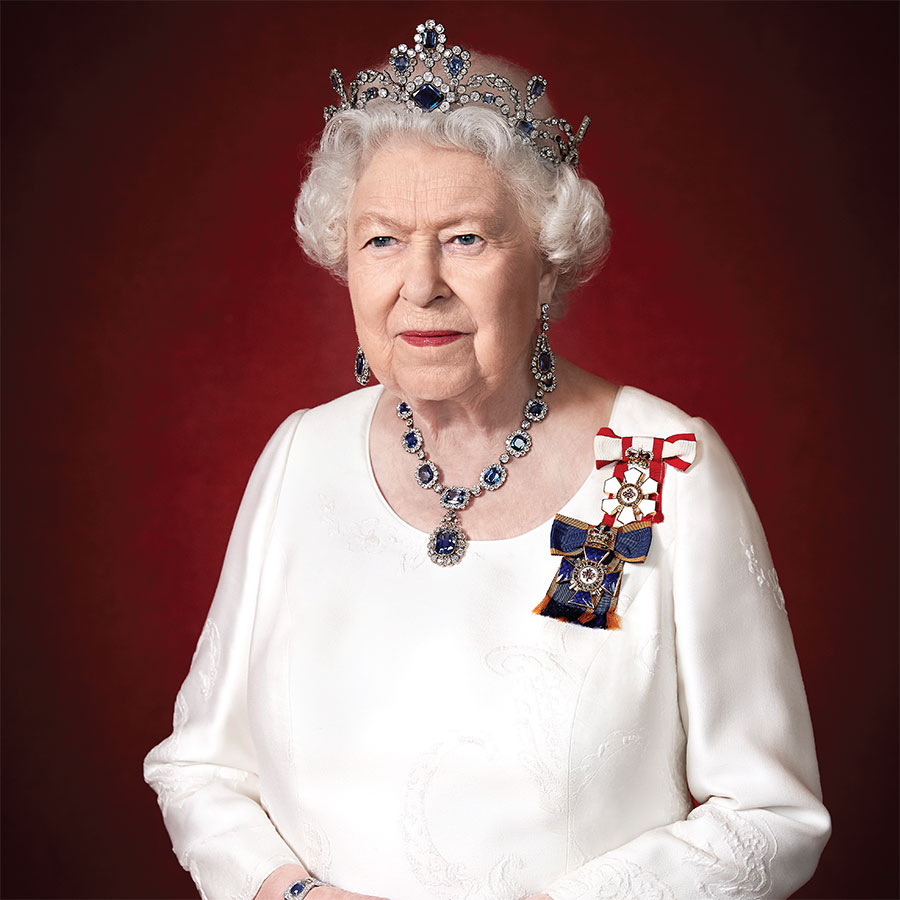 Fans and followers of Queen Elizabeth II have a new offering to add to their collections of memorabilia after the federal government released a new official portrait of Canada’s monarch.

In the first official Canadian portrait taken since 2012, the 94-year-old monarch wears an elegant, embroidered white dress with her Canadian insignia, as Sovereign of the Order of Canada and Order of Military Merit, pinned to her left shoulder.

Her jewelry set, the stunning King George VI Victorian Suite that dates to 1850, includes the blue sapphire-and-diamond earrings and necklace given to her by her father as a wedding present in 1947. In 1963, the Queen commissioned a tiara and bracelet to match, with the tiara reportedly made from a necklace owned by Princess Louise of Belgium.

The portrait was taken at Windsor Castle in March 2019 by royal photographer Chris Jackson, who posted the picture to his Instagram account on Friday.

“It was an incredible honour to have the opportunity to photograph HM Queen Elizabeth II on behalf of the Canadian Government for her official Canadian Portrait that has been released today,” Jackson wrote. “I’ve been lucky enough to have visited Canada many times now with members of the Royal Family and have the fondest memories of the people I’ve met and the incredible, vast and beauty country that I’ve been privileged to get to know a small part of over the years.”

The Queen last visited Canada with Prince Philip on an eight-day Royal tour in 2010, which began in Halifax on June 28 with stops in Ottawa for Canada Day, Winnipeg, Waterloo, Ont., and wrapped up in Toronto on July 6. Her first visit was in 1951, when she was still Princess Elizabeth, also with the Duke of Edinburgh. As Queen, she has been to Canada 21 times on official visits, according the Government of Canada website.

The most historically significant visit came in April 1982, when the monarch signed the proclamation of the Constitution Act in front of Prime Minister Pierre Trudeau, which granted Canada sovereignty, allowing it to change the constitution without Britain’s permission, and enshrining the Charter of Rights and Freedoms in the highest law of the land.

The new official Canadian portrait was released the day after the Queen made her first public foray outside the walls of Windsor Castle, where she and Philip have been self-isolating since the outbreak of the COVID-19 pandemic. She and Prince William raised some eyebrows when they stopped in at a new centre for defence technology near Salisbury without masks.

The Queen has been conducting royal business virtually in the past seven months, even celebrating her 94th birthday on April 21 in a video-conference call with her family.

On March 25, Clarence House confirmed that Prince Charles had been infected with the novel coronavirus that causes COVID-19, but by April 1, he appeared in a video message praising health-care workers and reporting he was “on the other side” of the illness.