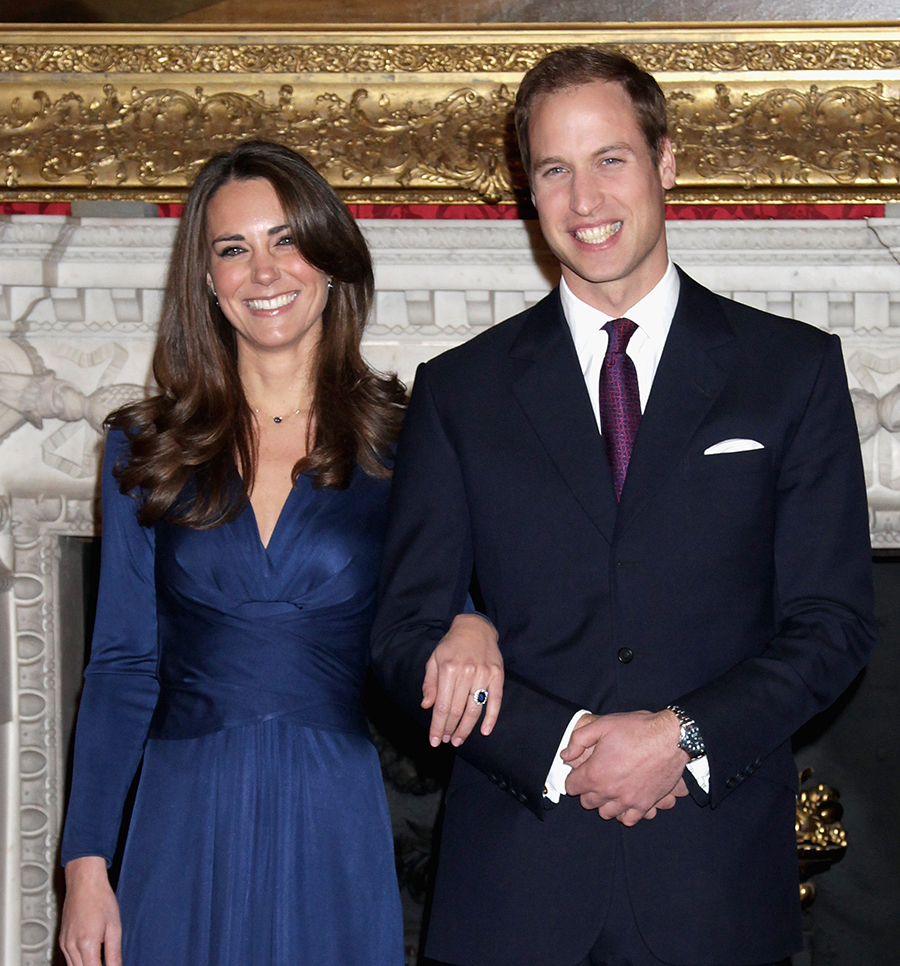 Prince William and Kate Middleton at St. James Palace after announcing their engagement on Nov. 16, 2010, after having been together for eight years. Photo: Chris Jackson/Getty Images

“It is a family ring, yes. It‘s my mother’s engagement ring. So I thought it was quite nice because obviously she’s not going to be around to share any of the fun and excitement of it all – this was my way of keeping her sort of close to it all,” William said in their engagement interview.

As it turns out, this very ring had a starring role in Season 4 of The Crown, which dropped this past Sunday on Netflix. The hit historical drama series, about the reign of Her Majesty Queen Elizabeth II, reenacted the moment when, after her engagement to Prince Charles (Josh O’Connor), Lady Diana Spencer (Emma Corrin) is presented with a selection of rings from William Summers, the Crown Jeweller and director at Garrad, a London jeweller that served the royal family from 1843 to 2007.

Diana, somewhat controversially, passed on a Burmese ruby that belonged to the Royal Family and instead selected the now famous 12-carat Ceylon sapphire cluster ring from Garrard’s own collection.

In the show, the scene hints at tensions between Charles and Diana  present even from the beginning. When Diana says the ring is the same colour as her eyes, Charles, standing behind her, responds by first saying that her eyes are brown and then green. And when the Queen (Olivia Colman) asks why Diana chose this particular ring, Charles jokes, “It’s the most expensive.”

“Elizabeth is said to have raised her eyebrows at the choice,” Annie Sulzberger, The Crown’s head of research, told British Vogue. “There is much speculation about the ring’s cost at the time but even a low estimate of £28,500 means it would cost an eye-watering £123,000 today.”

“There are a few different theories as to why Diana selected the ring: the colour matched her eyes, the Queen may have actually selected it or, as Diana was later quoted as saying, ‘It was the biggest.’ Others claim that it simply reminded her of her mother’s engagement ring,” Sulzberger adds. The latter is what the character of Diana also says in The Crown.

After Diana’s death in 1997, the ring was passed on to Prince Harry, who picked it as a keepsake of their mother. When Prince William planned to propose to Kate, however, he then reportedly offered it to his older brother for the occasion. When Harry later proposed to Meghan Markle on Nov. 27, 2017, he did find a way to incorporate Diana into his own ring, which included two diamonds from his mother’s personal collection. He wanted, as he said,  to make sure “she’s with us on this crazy journey together.”

Kate and William met at the University of St Andrews in Scotland in 2001. The university sweethearts, who become engaged on a private holiday in Kenya in October 2010 (although they didn’t make their official announcement until Nov. 16), went on to tie the knot in a fairytale royal wedding at London’s Westminster Abby the following April.

Flash forward 10 years, and the Duke and Duchess are proud parents to Prince George, 7,  Princess Charlotte, 5, and  Prince Louis, 2. The couple, as well as their children, have shown what an asset they are for the Royal family, particularly in how they’ve stepped up to provide hope for the nation during the COVID-19 crisis, showing support for frontline and health-care workers, as well as isolated seniors during the peak of the pandemic.

During these troubled times of global pandemic, and the monarchy’s own challenges with Prince Harry and Meghan retiring from senior royal duties earlier this year, and Prince Andrew’s scandal around his friendship with the late Jeffery Epstein,  Duchess Kate, in particular has become a force of positivity and confidence. Her latest project, the wildly successful ‘Hold Still : A Portrait of Our Nation 2020’ digital community exhibition, invited people from across the country to share their personal stories through photographs, focussing on themes related to the COVID crisis, including Helpers and Heroes, Your New Normal and Acts of Kindness. With over 31,000 submissions received the 100 finalists saw their images being broadcast on billboards, murals, and other places across the U.K.

The Duchess, who is an avid amateur photographer and patron of the Royal Photographic Society, launched the project with the National Portrait Gallery back in May.

Kate has made the Royal family more accessible through sharing adorable photos of her children – even creating many of their official portraits. In late January of this year, however, she moved on to more serious territory. To mark the 75th anniversary of the end of the Holocaust and Holocaust Memorial Day in the U.K., she invited two survivors and their families to Kensington Palace to take photographs of them for an upcoming memorial exhibit. At the time, Kate told People magazine, “It was a true honour to have been asked to participate in this project.”

All bodes well for the succession, indeed.

The Duchess Has Grown Into Her Royal Role of Future Queen