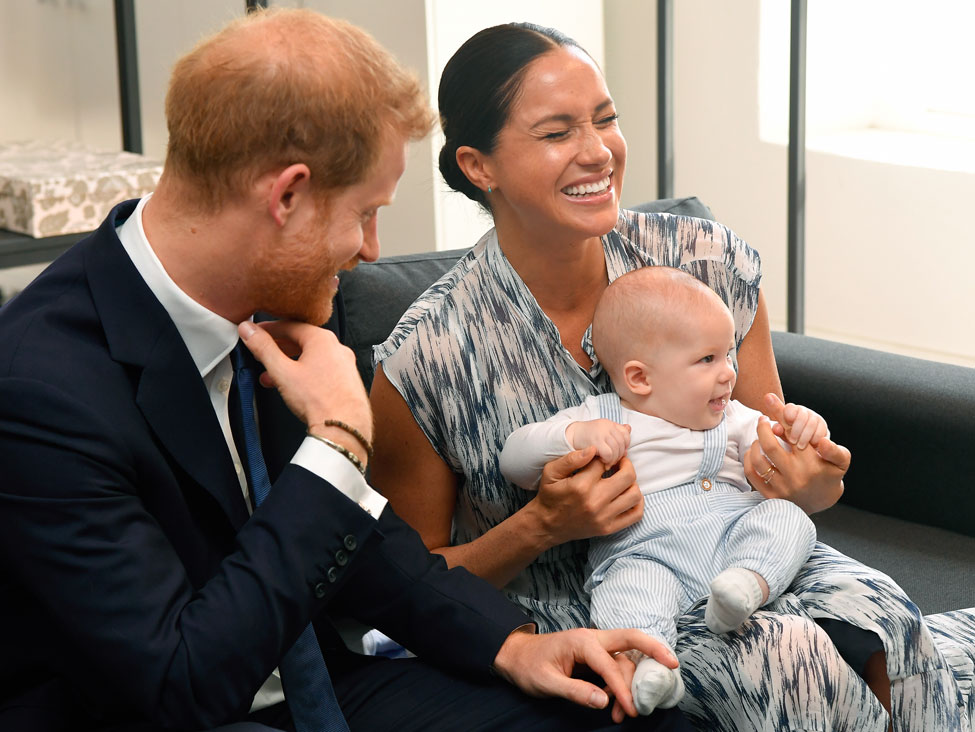 Happy news from the Duke and Duchess of Sussex. Their son, Archie, who turns two on May 6, is about to become a big brother. Here, the Sussexes visit Archbishop Desmond Tuto in South Africa on Sept. 25, 2019. Photo: Pool/Samir Hussein/WireImage

“We can confirm that Archie is going to be a big brother. The Duke and Duchess of Sussex are overjoyed to be expecting their second child,” a spokesperson for the couple told People.

Royal watchers were quick to notice the touching tribute to Diana, Princess of Wales, who announced that she was pregnant with Prince Harry 37 years ago — also on Valentine’s Day. The Daily Express reported at the time, a statement from Buckingham Palace said that Diana, then 22, had no preference whether it was a boy or a girl.

The announcement was accompanied by a gorgeous black and white photograph of Meghan relaxing outside with Harry, as she cradles her baby bump. The photo, taken remotely via iPad, was captured by longtime friend and British photographer Misan Harriman.

“Meg, I was there at your wedding to witness this love story begin, and my friend, I am honoured to capture it grow. Congratulations to The Duke and Duchess of Sussex on this joyous news!” Harriman tweeted.

In the photo, the Duchess of Sussex is wearing a floor-length dress by Wes Gordon for American fashion label Carolina Herrera. The dress was custom made for Meghan when she was pregnant with her son, Archie Harrison Mountbatten-Windsor, who will turn two on May 6.

Coming on the heels of the surprise Valentine’s Day announcement, CBS revealed on Monday that Oprah Winfrey will interview the Sussexes for a primetime special on March 7 called Oprah With Meghan and Harry. Winfrey, who attended Harry and Meghan’s wedding at Windsor Castle in May 2018, will talk with the couple about everything from their marriage, parenthood and their decision to step away from the Royal Family.

A Buckingham Palace spokesman said the Queen, Duke of Edinburgh, Prince of Wales and the rest of the Royal Family “are delighted and wish them well.” Baby Sussex, whose due date has not yet been announced, will be eighth in line for the throne behind Prince Charles, Prince William, Prince George, Princess Charlotte, Prince Louis, Prince Harry and little Archie. He or she will be the fifth grandchild for Prince Charles and the 10th or 11th great-grandchild for the Queen and Prince Philip, depending on if the baby arrives before or after Zara Tindall’s new baby, which is also due this year. Harry’s cousin Princess Eugenie welcomed a baby boy just days ago, on Feb. 9.

The Sussex baby announcement comes not long after the Duchess, 39, revealed she suffered a miscarriage last July. “Losing a child means carrying an almost unbearable grief, experienced by many but talked about by few,” she wrote in a candid New York Times essay on Nov. 25.

The Duke and Duchess officially stepped down from their roles as senior royals last year. It has been reported that if pandemic travel restrictions allow, Harry, 36, may return to Britain this summer to celebrate his grandmother, the Queen’s 95th birthday, as well as the the unveiling of a Kensington Palace statue of his mother, the late Diana, to commemorate what would have been her 60th birthday. The summer also marks another significant Royal Family milestone, with Harry’s grandfather, Prince Philip, the Duke of Edinburgh, celebrating his 100th birthday on June 10.

It has been a big week for the Duchess, who on Thursday won her privacy and copyright infringement case against Associated Newspapers for publishing extensive extracts from her August 2018 letter to her father in two of its large-circulation platforms, the Mail on Sunday and Mail Online.

The royal couple, now settled into their new life in Montecito, Calif., have been working to develop their charitable foundation Archewell, which will focus on issues close to their heart, such as mental health, female empowerment and the environment. They have also launched new lucrative initiatives with Netflix and Spotify.