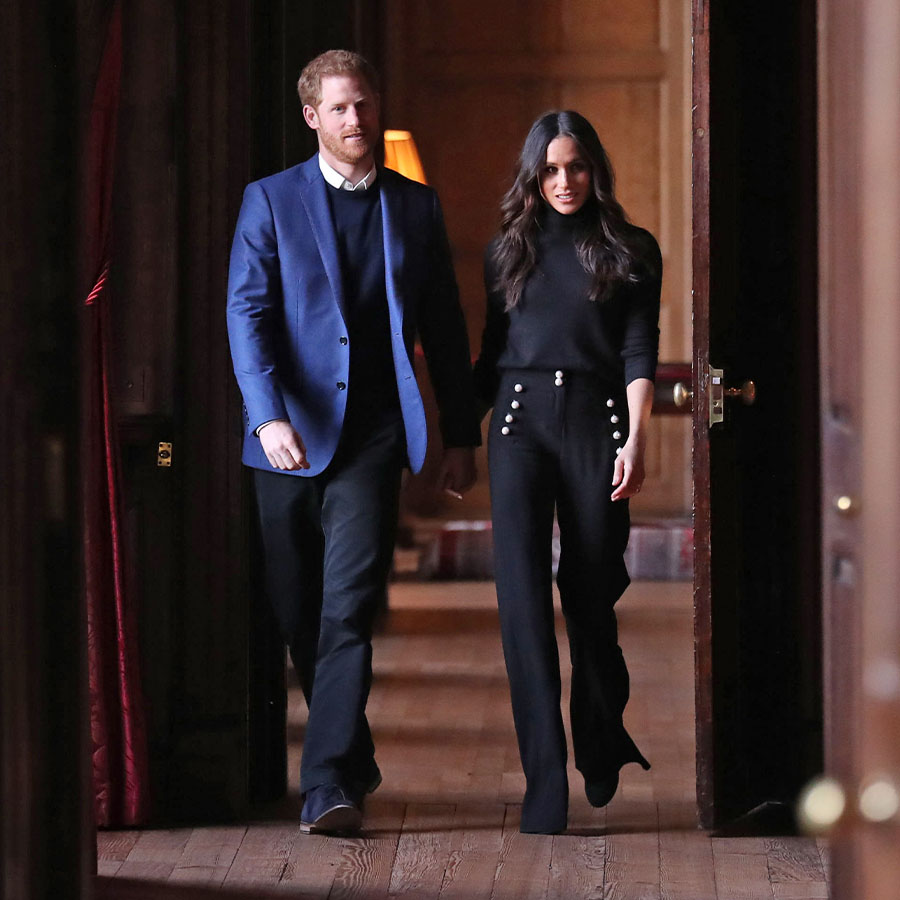 Meghan Markle and Prince Harry still find themselves embroiled in controversy despite having stepped back from their senior royal duties and moved to California last year. Photo by Andrew Milligan/WPA Pool/Getty Images

In yet another preview released today for Oprah With Meghan and Harry: A Primetime Special – which airs on CBS on Sunday, March 7 at 8pm EST – Oprah revealed she spoke to Meghan months before her royal wedding to ask for an interview, which she turned down by saying, “I’m sorry, it’s not the right time.”

When asked why now is the right time, Meghan says, “Well, so many things. That we’re on the other side of a lot of life experience that’s happened and also that we have the ability to make our own choices in a way. I couldn’t have said yes to you then, that wasn’t my choice to make.”

In an explosive clip released on Wednesday, the Duchess of Sussex said Buckingham Palace could not expect her and Prince Harry to be silent if it was actively “perpetuating falsehoods about us.”

“I don’t know how they could expect that after all of this time we would still just be silent if there is an active role that the firm is playing in perpetuating falsehoods about us,” Meghan replies. “And if that comes with risk of losing things, I mean, there’s a lot that’s been lost already.”

This follows the teaser bombs dropped by Oprah last Sunday for the highly anticipated sit-down tell-all with Meghan Markle and Prince Harry. The no-subject-off-limits interview, conducted at a Montecito mansion near both the Sussexes’s new place and her own $100 million compound. In the first teaser, you hear Oprah say to Meghan, “Were you silent, or silenced?” alluding to the “shocking” secrets Meghan has spilt.

They also dropped in a gem from Harry, bringing Diana into the conversation, saying he was afraid of “history repeating itself,” a clear message regarding the press he blames for his mother’s tragic death and the role of the paparazzi chasing her in that Paris tunnel. It is a masterful cliff-hanger produced to stoke maximum ratings.

Meanwhile, the timing is awkward as Britain and the Royal Family are on tenterhooks about the health of patriarch Prince Philip, who of course is Harry’s grandfather. The Duke of Edinburgh, who is 99, has been in poor health for quite some time. He was hospitalized several weeks ago for an infection, and it was announced he is not leaving anytime soon. Then events took a turn Monday, as he was transferred to a specialty heart hospital, where he has since undergone a successful heart procedure. The Queen, the consummate stoic, has continued with her normal workload, a habit she inherited from her father, King George, who kept a steady hand on the till in Depression and wartime, and that she has practiced through her long reign in times of personal and national crises. Indeed, many would contend COVID-19 has been the finest hour of Elizabeth II, allowing her to put closed punctuation on the Harry and Meghan dramas of last year.

But Palace insiders are not so quick to let Harry and Meghan take pot shots at the sovereign and her court from the posh suburbs of Los Angeles. It is expected they will spill some rancid beans on Sunday. So there have been a steady series of leaks, designed one assumes, to tarnish the shine of the Sussexes once again, ahead of the network special (set now to air in Britain on Monday night on ITV).

We’ve had reports calling for them to cancel in light of Philip’s illness. Leaked innuendo that William is cross about the Netflix millionaire brother and his wife going on again about their feelings and airing more dirty laundry in aid of their new media lives funded by Netflix and Spotify contracts. There was much grumbling about the fact the Queen has a speech booked for the same day, just hours before, in honour of Commonwealth Day (remember last year, the seating and order of service snub at the Sussexes final public appearance). The Duchess of Cambridge is also to appear.

The couple was further accused of “stepping on” some of the Queen’s messages this past week, as she spoke out to encourage vaccinations on the same day James Cordon released his zany double-decker Hollywood tour-bus and obstacle course, waffle-maker interview with his celeb pal Harry, who made it gallantly clear that leaving “It was a stepping back, not a stepping down” was HIS idea  – and it was definitively not a Megxit –  as it has been popularly dubbed, leaving the lingering insinuation of blame at Markle’s feet. Also, there was a rumble of consternation over Harry’s defence of The Crown, and a Netflix vehicle that had ravaged his own father (albeit semi-fictionally.)

Then overnight arose a fresh clatter. After Meghan’s series of wins—summary judgment in her lawsuit against the Associated Newspapers Mail on Sunday for breach of privacy in publishing a private letter to her father; the news they are expecting their second child after a heartbreaking miscarriage last year; and that the Oprah interview, so juicy it was extended to two hours from 90 minutes—the courtiers threw down their own gauntlet.

First came news that her press secretary, Jason Knauf, filed a report in 2018 accusing the Duchess of bullying behaviour, so bad two staffers left and a third had her confidence shaken. This one had to hurt, because Meghan’s brand is anti-bullying: she has been bullied by the tabloids (see privacy invasion, above, as well as well-established incidences of racism and a general picking apart of the former American actress in such a way that caused Harry to want to protect her by “stepping back” from their roles in service of the Queen and starting a new family life together in Hollywood). The two may very well accuse the royal system, or even members of their own family, of bullying behaviour as well. So this appears to be somewhat of a first-strike ahead of Sunday’s broadcast.

Markle’s lawyers released a statement reading, “The Duchess is saddened by this latest attack on her character, particularly as someone who has been the target of bullying herself and is deeply committed to supporting those who have experienced pain and trauma. She is determined to continue her work building compassion around the world and will keep striving to set an example for doing what is right and doing what is good.”

In the further response, which was in the form of a legal letter to The Times, who exclusively broke the story, lawyers for the couple reportedly accused the publication of “being used by Buckingham Palace to peddle a wholly false narrative.”

“Let’s just call this what it is — a calculated smear campaign based on misleading and harmful misinformation. We are disappointed to see this defamatory portrayal of The Duchess of Sussex given credibility by a media outlet. It’s no coincidence that distorted several-year-old accusations aimed at undermining The Duchess are being briefed to the British media shortly before she and The Duke are due to speak openly and honestly about their experience of recent years,” reads a statement from a spokesman for the Sussexes.

Buckingham Palace responded to the bullying allegations with a rare statement of its own, saying it was “very concerned” about a report in the Times detailing allegations of bullying from the former staff of Britain’s Prince Harry and his wife Meghan.

“Accordingly our HR team will look into the circumstances outlined in the article,” the palace said in a statement on Wednesday. “Members of staff involved at the time, including those who have left the Household, will be invited to participate to see if lessons can be learned.

The Royal Household will not tolerate bullying or harassment in the workplace,” it added.

Then there emerged an embarrassing tidbit about how Meghan wore great big diamond earrings (shown above) to a state dinner on the couple’s tour of Australia and Fiji. She said at the time they were “borrowed,” but, big reveal, they were a wedding present from Saudi Prince Mohammed bin Salman. She wore them three weeks after the Prince ordered the gruesome killing of American journalist Jamal Khashoggi. Technically, wedding gifts belong to The Crown, so they were “borrowed.” But the implication remains she deliberately obscured the provenance of the massive gems.

Meghan’s lawyers responded by saying, “In a detailed legal letter of rebuttal to The Times, we have addressed these defamatory claims in full, including spurious allegations regarding the use of gifts loaned to The Duchess by The Crown.”

This latest royal drama echoes last week’s duelling press releases, when the Queen issued a statement about the Duke and Duchess stepping down from public life permanently. Her brief release, timed after the year of cooling down built into the leave-taking agreement the Sussexes signed last January, read: “The Queen has written confirming it is not possible to continue with the responsibilities and duties that come with a life of public service.” In other words, no half-in/half-out, and all their patronages and Harry’s military titles would be gone with the stroke of a pen. The Sussexes responded swiftly with a message that was taken—by the wounded British press at least—as a swipe at the Queen. It read: “We can all live a life of service. Service is universal.”

The imprimatur of Oprah, who is America’s (and the Western world’s) spiritual godmother and chief confessor, carries a lot of weight and power by association. The pair are now friends of the mogul—Oprah has endorsed some of Meghan’s initiatives, including her Clevr Blends golden latte mix, a female-led brand of stress-relieving wellness products Meghan had invested in. Oprah, of course, was also a guest at the couple’s 2018 wedding, given a prime seat befitting her global stature.

Though the Sussexes would surely know how badly so many big-stakes royal television interviews have gone—from Charles and Jonathon Dimbleby when he admitted to the affair with Camilla to Diana and Martin Bashir and the “three of us in the marriage” quote that ended her marriage. Then there is the more recent Prince Andrew Newsnight interview that swiftly ended his royal career.

There are still four days to go until the interview hits the airwaves and splatters all over the royal family. Keep your eye out for more salvos from both sides. Where there is smoke, they say, there is fire.