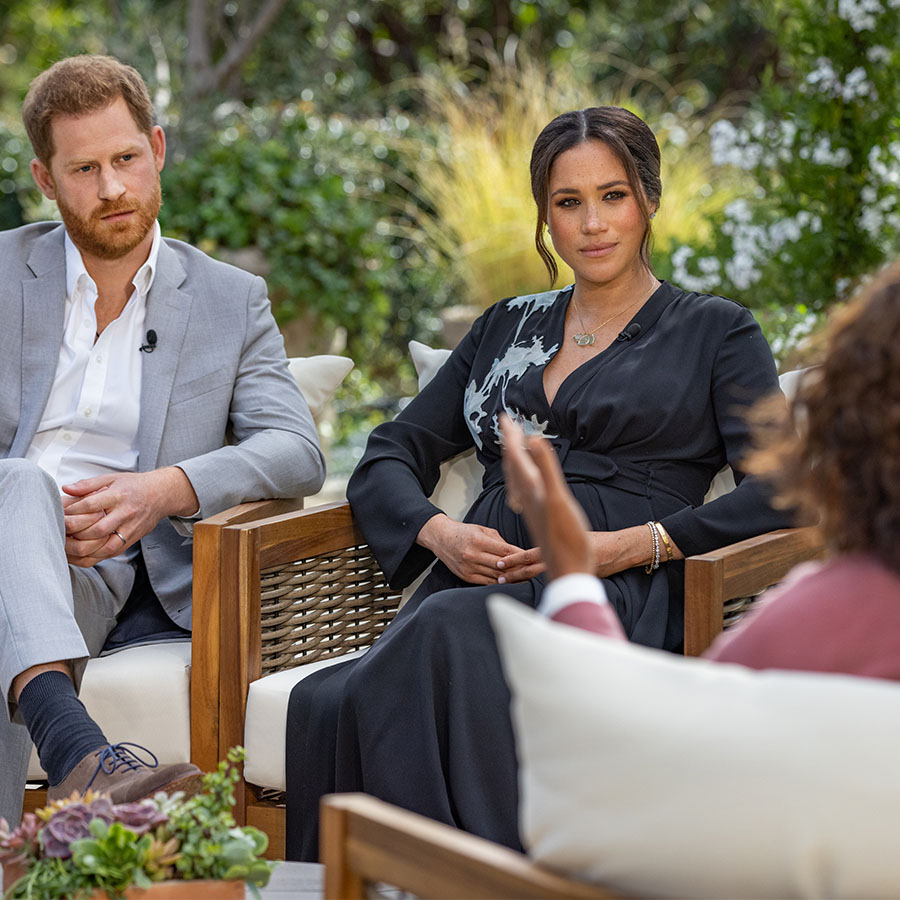 The Duke and Duchess of Sussex made numerous allegations that are sure to rattle the monarchy. Photo: Harpo Productions/Joe Pugliese/Getty Images

Meghan Markle, the Duchess of Sussex, dropped a full cluster of truth bombs on the world in her Oprah interview tonight. The biggest shockers include her admission of having suicidal thoughts while pregnant with Archie, and how the palace stopped her from seeking professional help. There were also, she said, painful family conversations with Harry about how dark in skin tone baby Archie might be. (Oprah later clarified on Monday’s CBS This Morning that while Prince Harry would not share the identity of the royal family member who made the comments about Archie’s skin colour, he did say it was neither the Queen or Prince Philip.)

She re-wrote tabloid history as we knew it according to the palace narrative: according to Meghan, it was the institution that decided Archie would not be made a prince. They wanted the title and the protection it would afford; this revelation means it was the palace that was denying the future King’s grandson, and the first baby of colour, his birthright. She also claimed it was Kate Middleton, the Duchess of Cambridge, who made her cry over the bridesmaid dresses in the run-up to her royal wedding, contrary to voluminous reports of the opposite. Oh, and get this: the pair was married secretly three days before the big global event. As Meghan said, it was those vows to each other they had framed.

When Prince Harry came into the frame halfway through, he pulled back the curtain on the monarchy, shattering the myths and mystique of what Oprah called a 1,200 year institution. “My biggest concern was history repeating itself,” was the line in the teaser. Here’s how he continued. You “add race in, add social media in. When you can see something happen in the same kind of way. I’m talking about my mother here.” He echoed Meghan’s central claim, that the couple received no help from the palace, even as he saw the situation was making his pregnant wife suicidal. “Anyone would ask for help, in the system you are a part of. To be told continuously ‘This is how it is. We’ve all been through it.’”

Of course, his mother is Diana, Princess of Wales , and there were echoes of her true story (as famously told to journalist Andrew Morton ) on her early self-harming years in the Royal Family in Meghan’s revelations. But some of the institution rattling insights Harry shared are more akin to the palace-rocking asides Diana shook the monarchy with during her infamous Panorama interview with Martin Bashir. Harry said that the Royal Family lives in fear of the tabloids – and so refused to protect his wife from them; that his Father, Prince Charles and Brother, Prince William are trapped in the “system of the monarchy,” as he was and he would not have left had he not met Meghan. “I have compassion for them, they don’t get to leave,” he said.

As to the question of family relations he said he feels badly let down by his father but hopes to heal the relationship, he loves his brother but the state of their relationship is “space” and that he still considers the Queen “my commander-in-chief,” though he was asked to give back his military patronages. The pair also revealed that they had called the Queen – who Meghan said was always kind and welcoming – on the news that Prince Philip was in the hospital.

As to the central question, why did they leave? A lack of support from “the firm” as Meghan referred to them. He insisted the “Megxit” narrative is completely false, and that it was not driven by his wife. We needed to “take a breath,” he said, “from this constant barrage.” The Netflix/Spotify California life was never the plan; it was simply, he says, their way of providing for their family and the security that was withdrawn.

The couple did not blindside the Queen, Harry said. “Did you blindside the queen,” asked Oprah pointedly. “I never blindsided my grandmother. I have too much respect for her.” He claims everyone knew what they were doing, as well as the timetable for them to step back from work as senior royals. Still, his father stopped taking his calls, “because at that point I took matters into my own hands.”

Whoa. Let’s take a breath for a moment. This interview was a lot of information. Oprah hit all the tough questions, and milked the follow ups.

Since the first trailer dropped one week ago, it has been a playground scrap the newly named “Sussex Squad” of old friends of Meghan’s versus the Palace. The early clips, citing “shocking” revelations and Oprah asking Meghan if she was “silent”—dramatic pause—“or silenced?”

A flurry of news stories broke in the British press, and this time it wasn’t tabloids gone wild, but respected broadsheets, citing secret sources, reporting on allegations from 2018. One revelation was the complaint made by a senior communications staffer that Meghan had been a bully, forcing out two direct employees and “humiliating” a third.

A swift campaign appeared on social media, wherein a flurry friends and colleagues of Markle defended the Duchess, attesting to her moral character and her kindness in their experiences with her. Sympathies in this messy stew leaned towards the Palace (really, the Queen) in Britain, where the ideas of duty and tradition and keeping calm and carrying on prevail. In America, pundits and public alike leaned towards Meghan and Harry. The idea of being free to speak one’s mind and defend oneself is important to the very different American identity. The dialogue has been splintered by the pile-on nature and general distortion that comes with all this being chiefly played out over social media. What no one disputes, is that as a Black woman, Meghan has suffered racist attacks in the press, in particular the British tabloids. This interview makes it clear that the royal family itself did not take the racist actions seriously, nor did they protect the couple. “It’s not what it looked like,” said Meghan. “The institution knew, and they did nothing.”

It is, of course, Commonwealth Day, which is a neat symmetry in that it marks a year since the Duke and Duchess of Sussex’s final (and emotionally charged) appearance on behalf of the Queen. The pair received what appeared to be a cold shoulder that day from his brother and larger family in the coverage of the event. Commonwealth Day is an important annual date on the Queen’s calendar, where the senior royals join her for a service at Westminster Abbey. This year the event was virtual, which took place in Britain just a few hours before the Oprah special on this side of the pond.

The Times of London reported that the Queen will not be staying up late tonight to watch on special feed at the Palace (it will be 1:00 am, by special feed and is to be broadcast in Britain tomorrow evening), but she will be briefed over breakfast tomorrow.

In a long-planned, speech today, the Queen, wearing a brooch she wore on her honeymoon in a nod to Prince Philip, focused on business, calling for unity from the nations of the Commonwealth in “a time like no other,” saying the family of nations from the former British empire now have a “deeper appreciation of the mutual support and spiritual sustenance we enjoy being connected to others,” she said in a televised message. Prince Charles, joined by other royals including his elder son and heir, Prince William, also broadcast a tribute to the courage shown by people throughout the Commonwealth in response to the pandemic. That carefully orchestrated bit of royal theatre is now fully eclipsed by the two hours of Oprah unburdening.

The way this interview will fall—Team Meghan and Harry or Team Firm — will likely be wholly different in the U.S. and the U.K. In the U.K. the custom is to value duty, while keeping calm and carrying on; in the U.S. freedom is king, and the right to speak one’s truth is enshrined in the constitution and the hearts of its people.

Diana was text and subtext in this interview. Meghan even said she confides in one of her late mother-in-law’s friends, “because who else would understand?” In the same way that Diana, with her enormous charisma and embrace of international celebrity, was a gateway for Americans to become involved in Palace intrigue, so too are Meghan and Harry, now embedded among fellow high-wattage celebrities in Los Angeles, offering outsiders a peek inside to the claustrophobic walls of the palace. And boy do they rip the doors off the castle and blow up the moat behind them in this interview. We are going to be dissecting the fallout and follow up for many news cycles, as it is set to play in Britain tomorrow.

When there are so many truth bombs going off, the (unheard of ) reveal of the gender of a royal baby while still in utero barely registers in the top 10 of the Oprah interview. But the clip of Harry, Meghan, Archie (seen running on the beach with Meghan in black and white home footage), their unborn baby girl due in the summer — the dogs and the chickens at their new Montecito home tells a story as well.

Meghan, after a period of darkness and fear, says: “I’m still standing. My hope for people in the takeaway from this is to know there is another side, to know that life is worth living.” As for her Prince, she has the last word on his role in getting them out of “the system” and “the institution” as they both call life inside the palace. “He ultimately called it.” She turns to her husband. “You made a decision that certainly saved my life, all of us.”