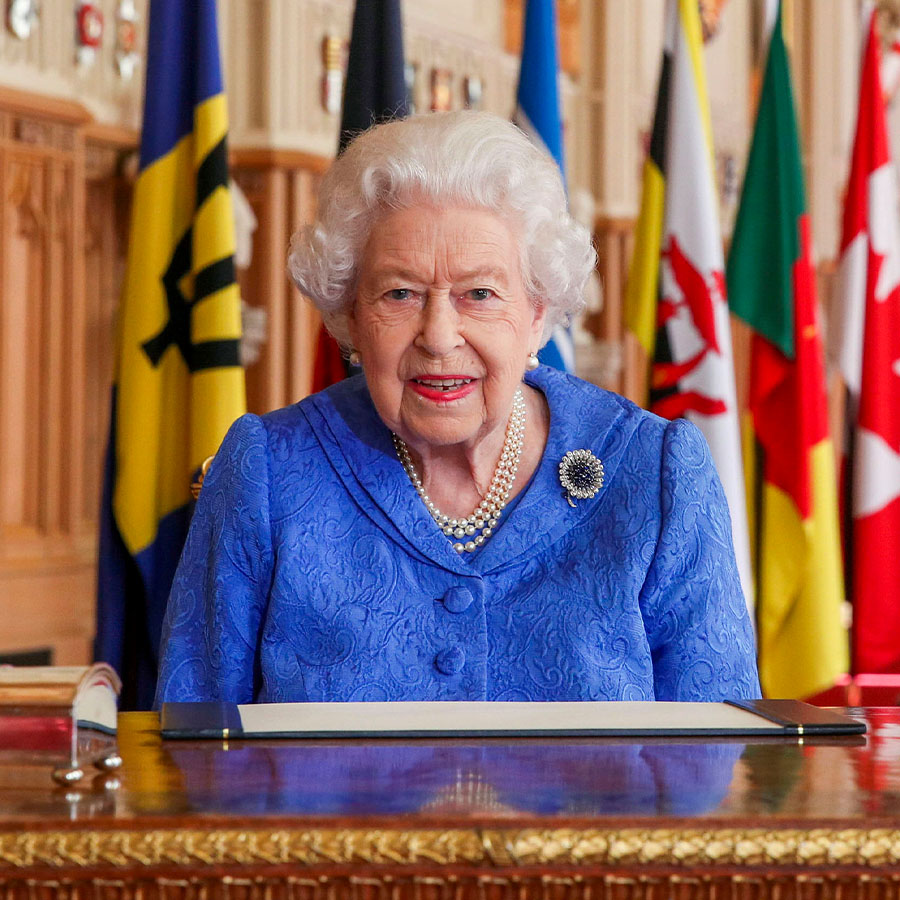 The Queen has spoken. In a four-sentence statement issued under her name by Buckingham Palace today, Queen Elizabeth responded in a perfectly calibrated manner: equal parts warmth as family matriarch and dignity and solemnity as sovereign. The Oprah interview with Meghan and Harry only aired yesterday evening in Britain — after its Sunday night debut in North America —so the response is not as delayed as it seemed amid the sound and fury of tabloid drum-banging. “The whole family is saddened to learn the full extent of how challenging the last few years have been for Harry and Meghan,” it reads. “The issues raised, particularly that of race, are concerning.”

She then finds a subtle, and very British, way to indicate that the Palace may not necessarily agree with all the details the couple put forth, in the shocking television interview that broke all known royal protocols. “Whilst some recollections may vary, they are taken very seriously and will be addressed by the family privately.”

In other words: show is over, folks.

The final line echoes previous statements the Queen has made since the Sussexes made public their desire to step-down as full-time royals last January: “Harry, Meghan and Archie will always be much-loved family members.”

The after effects of the shock revelations are roiling British political and society figures. The fallout from the interview caused the head of a high-profile “enemy” of Meghan’s to roll today: Piers Morgan has resigned from his perch on ITV’s flagship Good Morning Britain after he said on-air Monday that he did not believe Meghan had contemplated suicide.

The morning show host had become increasingly strident in his badmouthing of the Sussexes, singling out Meghan in particular, for rebuke, with some 50 toxic tweets leading up to the Oprah sit-down. He was called out by colleague Alex Beresford, a person of colour, this morning, storming off the set amid criticism for his views. (Piers had once been professionally friendly with Markle, before she met the Prince, and he has made her dropping of him into a vendetta ever since.)

The families of Meghan and Harry have also begun to respond. The most elegant — and silent — statement came from the Duchess of Cambridge. Kate wore a pair of £85 drop earrings by one of Meghan’s favourite designers, London-based designer Missoma, in an International Women’s Day call yesterday. Kate and Meghan both often speak volumes with their clothing and jewellery: the Missoma website describes these pieces as: “a heart-based healing crystal that radiates love, compassion and all-around healing vibes.” Nicely played, Kate. Charles was out and about today, and did not respond to reporters calling out questions to him about the interview at a solo visit to Jesus House Church in London or on a joint visit to a vaccination centre later, where he was accompanied by his wife, Camilla. A source did express his “devastation,” however, in news reports today. This is generally the backdoor way that royals let their feelings be known, by allowing specific staff to speak on their behalf, but strictly unofficially. The “source” said that Charles is “deeply” concerned about the racism claims, and “it goes against everything the Prince of Wales believes in. He believes diversity is the strength of our society.”

Meanwhile, back at Good Morning Britain, aside from the dustup between Morgan and Beresford, they had a special guest via video link from Mexico: Meghan Markle’s father, Thomas Markle, on hand to give his reaction to the remarks by his estranged daughter.

In a long and rambling interview, he said that he “still loves” Meghan and “will always be there for her.” He expressed empathy for her suffering: “It really did upset me, like I said, it would have been easy for her to reach out to me, any of the rest of her family, who she claims she doesn’t know.”

His many and varied resentments then began to leach into the broadcast, saying of Harry, in whom Meghan did confide, that he had “obviously not supported her that well.” He then added, about the idea that he and his kin could have helped: “The biggest problem here is that she has pretty much ghosted all of her family.”

On the subject of the royal family and the accusations of racism, Markle Sr. was magnanimous: he said it was likely just a “dumb question” by the (unknown) royal who questioned what Archie’s skin colour might be. He then went on to call Harry and Meghan’s take on the anecdote as “bullshit.”

Further mincing no words, Markle Sr. reacted to Meghan’s expression of hurt that he had lied to her in the run-up to the royal wedding. He said, she had “let me down too” when she wasn’t in contact after he had heart surgery. Saying, “she made a statement saying she had lost me, she didn’t lose me…. I’m there for her now if she wants me,” further pointing out that the Sussexes are in proximity [five hours by car] from Montecito to where he lives in Rosarito, just across the border in Mexico.

Markle couldn’t resist a last dig at erstwhile son-in-law Harry, though, calling him “snotty” when they last spoke on the phone when he was in the hospital in 2018. He apologized again for his actions, but then tacked on a statement unlikely to melt his daughter’s heart, “We all make mistakes. At least I’ve never played naked pool, or dressed like Hitler, like Harry did.”

Going back into the muck is a most ill-advised strategy.  Similarly, the Sussex’s long interview with Oprah will continue to feed the very tabloid beast they doth protest to loathe. By contrast, the Queen’s response today is a testament to the power and wisdom of brevity and a careful choosing of one’s words. The Queen has always played the long game, and stayed above the fray.