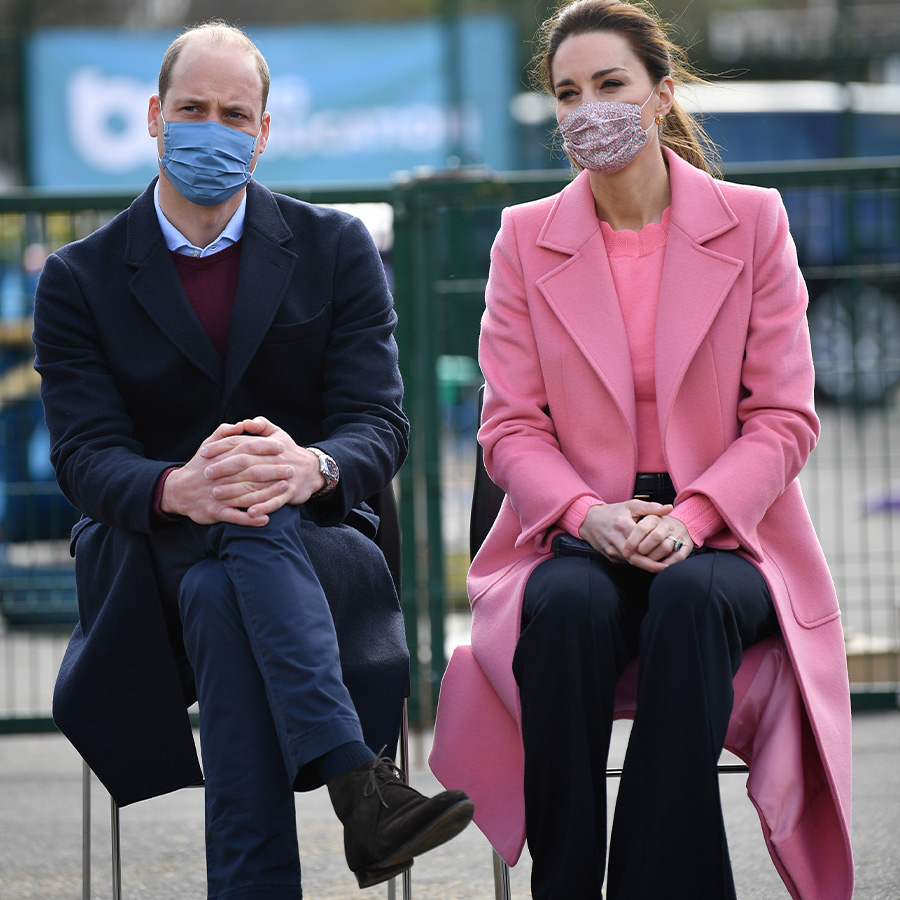 William today became the first member of the royal family to speak about the Oprah interview with Harry and Meghan. His words were short and sweet and very carefully chosen. Asked first if he had spoken with his brother since the interview, he replied, “No, I haven’t spoken to him yet, but I will do.”

Then came the money question as a Sky TV reporter asked, “Is the Royal Family a racist family?” William responded calmly, echoing the format of the question: “We’re very much not a racist family.”

Was it a lucky shot by the reporter, catching these pithy answers as William and Kate made on a visit to East London’s School 21 to learn about a mental wellness program for children? That is rather doubtful. William’s responses were smooth and crisply delivered, the exchange composed of an action shot with William walking away from camera.

The choreography sent a clear message that the Firm’s senior members are Back to Work. It is the calculated follow up to the Queen’s message of Tuesday, in which she said that while the Palace (and her family) takes the Sussexes’s assertions seriously, the matter will be handled privately, thank you very much.

By acknowledging the reporters — which his father, Charles, notably did not do earlier this week when he was besieged by questions about Harry and Meghan while making a pair of public appearances—William was seen to firmly take the lead on moving forward for the whole family.

Since the beginning of the pandemic, the youthful and popular William and his equally popular wife, Catherine, have emerged as the primary public faces of the House of Windsor. First, because it was safer for the 30-somethings to be out and about. Later, because of their continued popularity.

Kate, for her part this morning, did not even glance at the cameras, walking ahead and providing physical guidance for how the educators they were meeting with should carry on. William spoke, through his surgical mask, barely looking over his shoulder.

William represents the future of The Crown. He has grown into the role and carries off his duties with gravitas. He can be fun and playful, but it is in a planned context, say batting a cricket ball or sharing a joke with a young subject at a classroom table. But when it comes to the press, he is always “on,” which means on guard. In a serious matter such as this, he does not improvise, or emote off the cuff, or share his feelings or disappointments.

We therefore must conclude this exchange was deliberate, an attempt to put to rest calls for the family to “speak out” on the unfurling scandal. Or, in modern media parlance, “to break one’s silence”: a ridiculous concept itself driven by omni-channel media that demands public figures share their opinions on every development of every story. The Royal Family is showing it does not want to play ball in this new arena of public communication.

There have been very different responses to the Oprah interview and its fallout on either side of the Atlantic. The British media is picking apart what it can of — in particular — Meghan’s story. In the end, the more powerful assertions—of racism, of a lack of support for her mental health care—have been lumped in with the smaller, more gossipy elements of Sunday night’s unburdening. This is unfortunate, because her experiences of racism and mental health are important subjects that need exploration and can help move society as a whole forward.

The American press is equally hungry, but far more supportive of the Sussexes’s bid to regain their rights to freedom, liberty and the pursuit of happiness and gainful employment. There is the same indignation about those central issues—racism and mental health. There is also, often, a lack of understanding about the history, traditions and even constitutional role of The Crown in Britain. Here in Canada, we tend to understand the role and protocols of the royal family a little better, while we simultaneously are enthralled the soap opera playing out from an ocean away.

Whatever national lens anyone is peering through, the denouement of this story is starting to feel sad above anything else. William, emulating his grandmother and her stoic resolve to carry on through war and tragedies personal and public, is leading the way for us all. His two concise sentences were the appropriate response for now.

It is more interesting that his father, the direct heir to the throne, has let William speak first for the family as a whole. It shows there is an understanding there will have to be a youthful, modern vision of the monarchy presented to the British people in the sunset years of Queen Elizabeth’s reign.