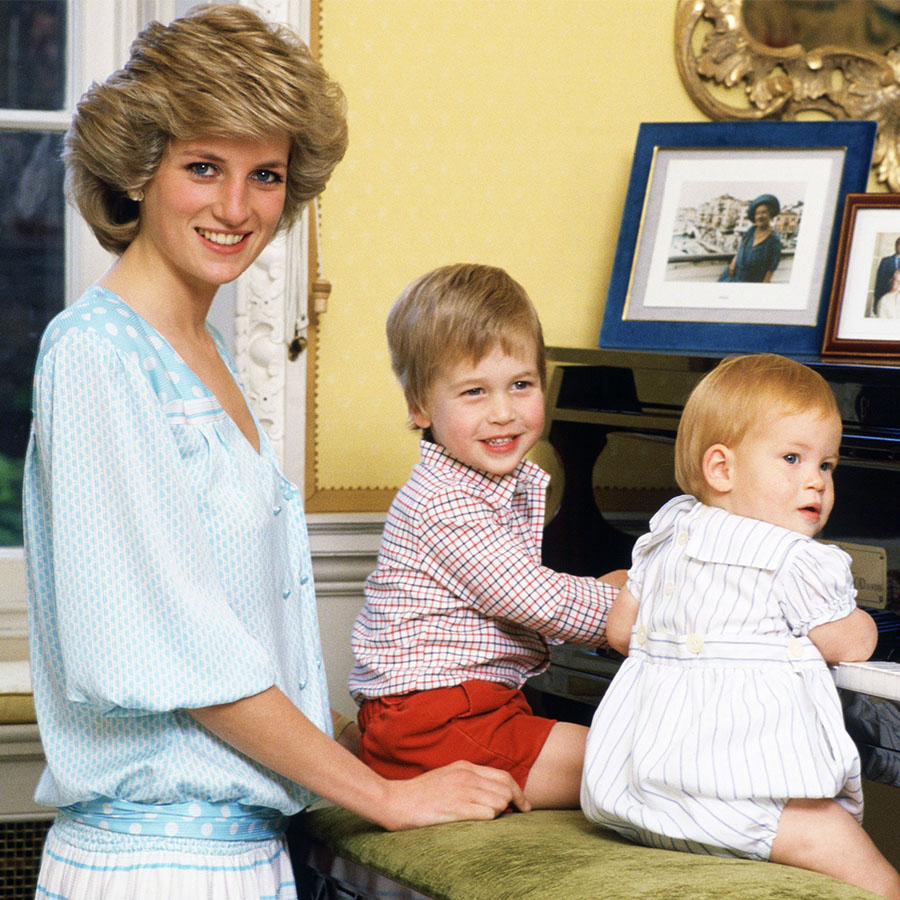 Diana, Princess of Wales with her sons, Prince William and Prince Harry, at the piano in Kensington Palace on Oct. 4, 1985. Photo: Tim Graham Photo Library via Getty Images

Even as Trevor Noah dissed the Royal Family last night at the Grammy Awards — he jokingly compared the tension in the awards tent to the tension at a Royal Family reunion — the family spent the day expressing love.

Sunday was Mother’s Day in the U.K. and the royals, from littlest Prince Louis to the Queen herself paid tribute to mothers who had passed but are remembered with love.

In a touching tradition, the three young children of Prince William and Kate made cards for Diana, Princess of Wales, the granny they never knew but who would have loved them more than anything. “Each year on Mother’s Day, George, Charlotte and Louis make cards remembering their Granny, Diana, for William,” noted a @KensingtonPalace Instagram post, with images of the colourful cards. “Dear Granny Diana,” wrote George. “I love you very much and think of you always.” “I am thinking of you on mothers day. I love you very much,” Charlotte wrote on her card. “Papa is missing you.” And two-year-old Louis coloured in a heart, added stickers and scrawled his name.

“This year Mother’s Day will be different once again,” wrote William and Kate in their social media message, referring to the pandemic. “Many of us will be apart from our loved ones but looking forward to a time in the not too distant future when we can give our mother a hug again.”

They added, “But for those experiencing bereavement, today may be particularly challenging.”

Among those who keenly feel their grief on Mother’s Day is William’s brother, Harry, who during last week’s bombshell interview with Oprah, mentioned the loss of his mother as a key reason for leaving the U.K. and giving up his royal role in order to protect his wife.

Harry was 12 when Diana, at age 36 — the same age Harry is now — died in a car accident. He has consistently blamed the British media and paparazzi who hounded and chased her.

“I think she would feel very angry with how this has panned out, and very sad,” he said during the CBS interview, about his estrangement from the family and loss of his royal role. “But ultimately, all she’d ever want is for us to be happy. … I think she saw it coming. And I certainly felt her presence throughout this whole process.”

From the his and Meghan’s new home in California, Prince Harry arranged for flowers to be laid yesterday on Diana’s grave in the garden of her family’s home, the Spencer’s Althorp estate in Northamptonshire, England.

Meanwhile, the Queen marked Mother’s Day by posting a sweet black and white photo of herself at 13 with her mother, taken in April 1940. It appeared on the Royal Family’s Twitter account along with the message: “To all Mums everywhere, we wish you a very special Mother’s Day.”

Charles and Camilla also posted smiling pictures of themselves as young adults with their mothers, along with the message, “Wishing everyone a happy Mothering Sunday,” accompanied by an emoji of a cherry blossom. The virtual event was the Queen’s first appearance following the incendiary Oprah interview and the indomitable monarch reportedly was her usual gracious self, with no acknowledgement of the family turmoil. Instead, she recalled her meeting in 1968 with Russian cosmonaut Yuri Gagarin, the first person to go into space. The Queen, as well as her husband, Prince Philip — who was recently hospitalized for heart surgery nearly four weeks after being admitted as a precautionary measure — met with Gagarin at Buckingham Palace after his historic 1961 journey.