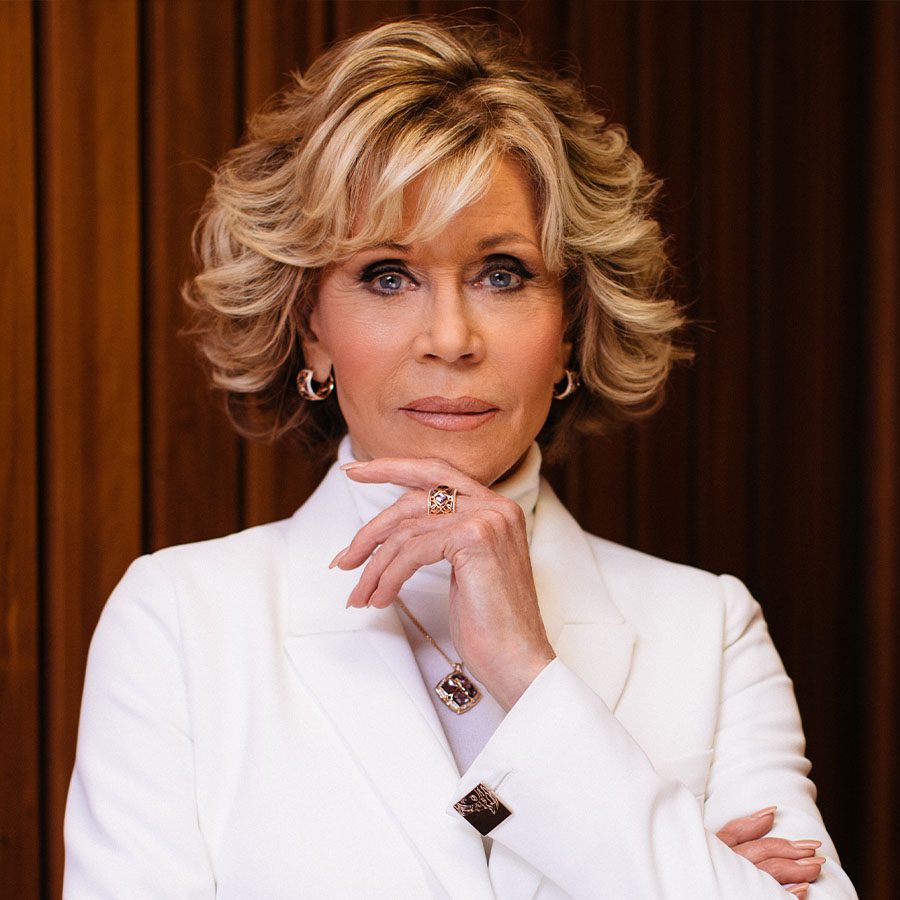 Jane Fonda became a household name at age 27 with the success of the film 'Cat Ballou.' And at 83, she's still leading the charge and making headlines for her work on and off the screen. Photo: Caroline McCredie/Getty Images for Chopard

With the passion and energy of women half her age, a now 83-year-old Fonda has spent a lifetime advancing the conversation on politics, activism, age, sex, and beauty. And her stunning April cover of Harper’s Bazaar only confirms why we love her (after all, she appeared on Zoomer’s cover in 2015) as she shows off her still enviable figure in a sexy black sequin dress. Her iconic shag haircut with bangs is an edgy throwback to her 1971 role of Bree Daniels in Klute.

An inspiration and cultural touchstone for six generations, Zoomer charts her most iconic moments.

With the success of Cat Ballou, a 27-year-old Fonda becomes a household name playing the titular role in a movie the American Film Institution would name among the Top Ten Greatest Westerns of all time.

The classic Neil Simon romantic comedy Barefoot in the Park sees Fonda nominated for a BAFTA Award for Best Actress. It would also be her first movie with Robert Redford. “I was always in love with him,” she told Ellen DeGeneres in 2017 as they wrapped Our Souls at Night, their fourth film together.

1968: Pin Up For the Sexual Revolution

Fonda torches her Good Girl image as a Paco Rabanne-clad intergalactic sex kitten in Barbarella, an outrageous sci-fi sex farce directed by her husband, Roger Vadim. Written by Terry Southern and co-starring Anita Pallenberg, it would become a cult classic—and the source of the name, Duran Duran, for the chart-topping pop band.

Concerned that playing a prostitute was at odds with her emerging feminism, Fonda, 33, was hesitant to take on the role of Bree Daniels in Klute co-starring Donald Sutherland. A movie that launched a thousand haircuts and a yen for sequin dresses, Fonda earns her first Oscar for Best Actress.

The 1970s: The Political Activist

Photographed on a Vietnamese tank in 1972, a move she would later regret, Fonda is derisively dubbed “Hanoi Jane”. Marrying left-wing advocate Tom Hayden, her professional and political interests start to dovetail. Coming Home (’78) earns Fonda a second Oscar for her portrayal of a conventional woman’s anti-war awakening and The China Syndrome (’79) centers on a nuclear cover-up.

Forming her own production company, Fonda come up with 9 to 5 and tags Dolly Parton and Lily Tomlin as her co-stars. A ground-breaking feminist romp that nailed the zeitgeist, it becomes one of the highest-grossing comedies of all time and Parton’s theme song wins a Grammy for Song of the Year.

To fund her activism, Fonda releases a workout video, pioneering women-centered fitness and launching an industry. Jane Fonda’s Workout becomes the top selling VHS tape of all time and is credited with spiking sales of the new VCR. Fonda will release 23 videos, more than any other exercise series, including two 2010 DVDs aimed at an older audience.

Fonda shocks everyone by marrying right-wing CNN founder, Ted Turner, and retiring to become the attentive wife of the billionaire broadcasting mogul who teaches her to hunt and fly fish and likes her to “dress sexy”. They divorce in 2001.

Fonda’s 21st century return sees her reclaim her Hollywood career and her activist mantel. Marching in support of the Palestinians and speaking out against the Iraq war, in 2005 she pens her memoirs My Life So Far and stars in her first film in 15 years, the hit comedy, Monster-in-Law with Jennifer Lopez. In 2009, she earns a Tony nomination for the Broadway play, 33 Variations.

A movie star who’d eschewed television, Fonda switches gears and scores Emmy nominations in 2013 and 2014 for her role in Aaron Sorkin’s The Newsroom. In 2015, she produces and stars in the hit Netflix comedy Frankie & Grace, which runs for seven seasons and scores her a third Emmy nom.

With America lurching through myriad uproars, Fonda protests Trump’s inauguration at the 2017 Women’s March, throws her support behind the MeToo Movement, and is arrested five times in 2019 at ‘Fire Drill Friday’ rallies she organizes with Greenpeace to advocate for climate change legislation. Taking an eco-minded stance against consumerism, Fonda declares the signature red coat she wears to protest, the “last piece of clothing I’ll ever buy”.

Fonda accepts the Cecil B DeMille Award for lifetime achievement at the March 2021 Golden Globes in a suffragette white suit, using her speech to call for more inclusion in Hollywood’s ranks. She then graces the cover of Harper’s Bazaar (above), coming full circle in edgy silver bangs and a slinky sequin dress that recalls the one she made famous in Klute five decades earlier.