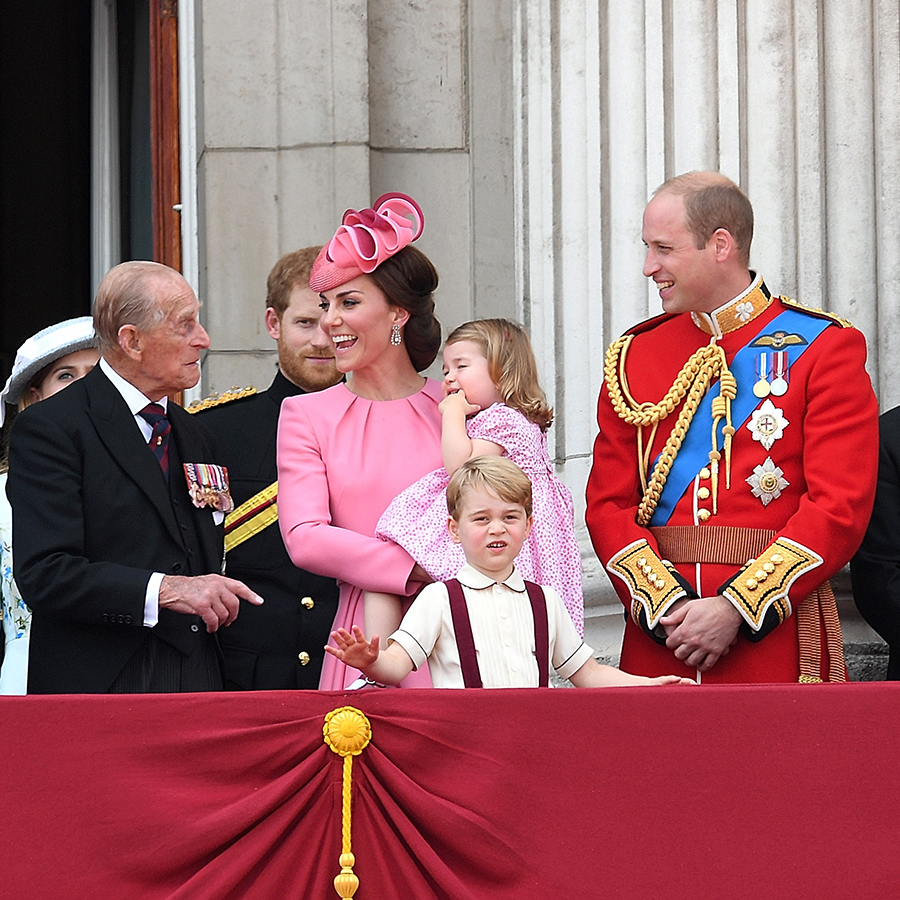 William and Kate, seen here with their children and Prince Philip at the Trooping The Colour parade in 2017, are among Royal members sharing never-before-seen family photos of the duke in honour of the late prince. Photo: Karwai Tang/WireImage

Much has been written about his role as beloved husband of Queen Elizabeth II for over seven decades, as well as her long-serving consort, but Prince Philip had another important position. He was a father, grandfather and great-grandfather. In fact, at the time of his death at age 99, he had 10 great-grandchildren — with another on the way.

As a way of paying tribute to the family patriarch, various members of the Royal Family took to social media this week, surprising fans with previously unseen portraits of the royal brood.

One photograph posted to the Royal Family Instagram account shows the Queen and Philip with seven of their great-grandchildren, including the Cambridge kids — Prince George, Princess Charlotte and Prince Louis, who was only several months old at the time — along with Princess Anne’s grandkids, Savannah and Isla Phillips and Lena and Mia Tindall. The picture was snapped by talented amateur photographer Duchess Catherine in 2018 when the group gathered at Balmoral Castle.

The Duke and Duchess of Cambridge also shared a portrait with the Queen and Prince Philip along with their two oldest children. The photo, taken back in 2015, captures a touching moment as baby Princess Charlotte watches her great-grandparents and the Queen lovingly smiles back at her. Prince George, adorable as ever, is seen holding hands with his father. The photo, which features three royal generations, was also taken at Balmoral Castle.

“Today we share, along with Members of @theroyalfamily, photographs of The Duke of Edinburgh, remembering him as a father, grandfather and great-grandfather,” the photo was captioned on Instagram.

Earlier this week, in a moving tribute to Philip, Prince William and Kate released another photo of Prince George riding in a carriage with his great-grandfather.

The Prince of Wales and Duchess of Cornwall also posted tribute photos on their social media accounts. In a vintage black and white photo from 1966, Prince Charles and his father are on horseback playing polo. A second photograph shows Prince Philip, Prince Charles, and Camilla at Prince William and Kate’s wedding in 2011.

“Remembering The Duke of Edinburgh as a much-loved Father and Father-in-Law,” they wrote.

Prince Harry, who flew from Los Angeles to the U.K. to attend Prince Philip’s funeral this Saturday, released a moving statement earlier in the week. His wife Meghan Markle, who is pregnant with the couple’s second child, did not make the trip on her doctor’s advice.

Princess Eugenie, whose two-month-old son August was given the middle name of Philip, also shared a remembrance post for her grandfather, writing, “I remember learning how to cook, how to paint, what to read. I remember laughing at your jokes and asking about your spectacular life and service in the navy,” she said. “I remember incinerating the sausages and you swooping in to save the day. I remember your hands and your laugh and your favourite beer.”

She continued, “I will remember you in your children, your grandchildren and great grandchildren. Thank you for your dedication and love for us all and especially Granny, who we will look after for you. ”