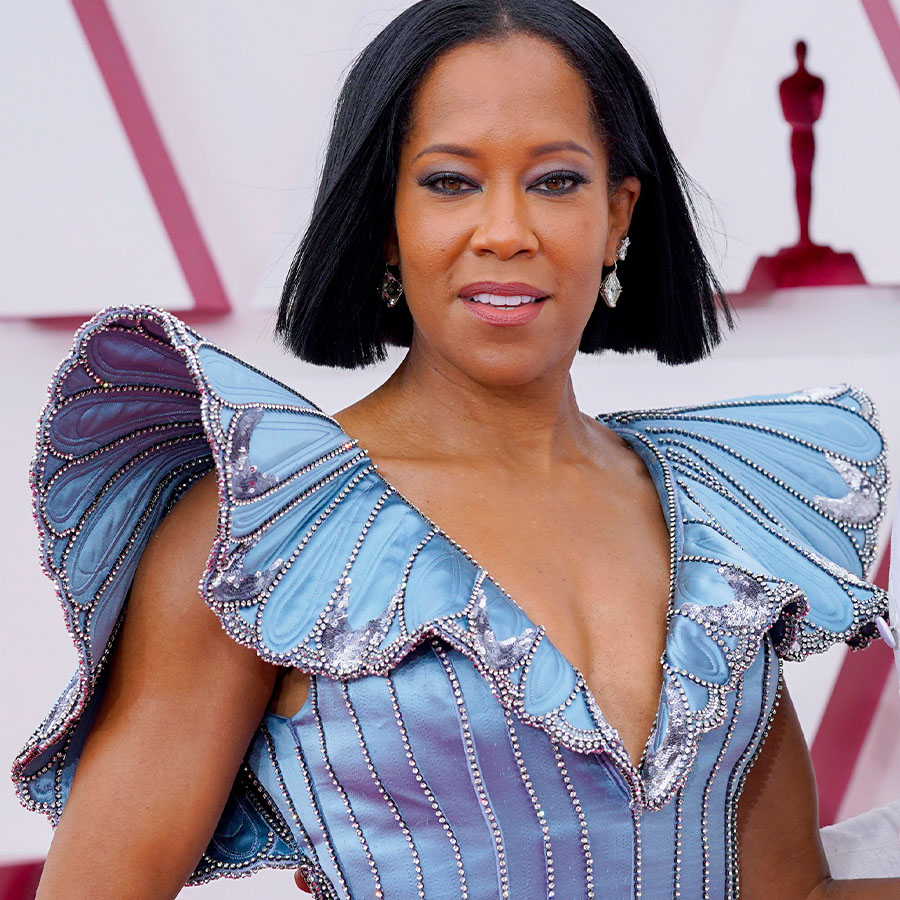 Hollywood’s elite brought the glitz for the Oscars, the first live red carpet of the pandemic era. And lest anyone had been tempted to scrimp on the glam squad, the producers sent out a letter to the pared-down invitee list instructing the dress code would be “a fusion of Inspirational and Aspirational,” along with a warning: “Formal is totally cool if you want to go there, but casual is really not.”

The beautiful people stepped up to the challenge, and it was heartwarming (and relatable) that everyone seemed so genuinely excited to be all dolled up for an almost “normal” event in (careful) proximity to other actual humans. The live element has proven to be the critical missing ingredient of disappointing awards season viewing experiences and there is a lot on the line here: audiences for the Grammys and Golden Globes were both down by more than half this year.

The big trends on the Oscars red carpet: gold dresses (and Leslie Odom Jr.’s gold suit), white dresses, red dresses finished with loads of sparkle embellishment and honkin’ big jewels (including Daniel Kaluuya’s diamond necklace). Another major trend that has been building is how far the men on the red carpet have elevated their game with creative and chic takes on black tie.

The mani-cam is gone (one of the positive benefits of the pandemic!), but the abbreviated and socially-distanced red carpet meant that there really were really no “worst dressed” to give us all a frisson of schadenfreude. The gravitas of this first live event must have had a sobering effect. Bad taste is out, and giving it your all is very much in. Definitely inspiring and such a relief to not see any more pajamas! Hollywood is about illusions that stoke our imagination and the Zoom awards shows that showed stars were “just like us” were becoming a bummer.

With that in mind, see below for our favourite fashion looks of the night, from gold,  white and red themes to the rest of the best dressed list.

Carey Mulligan definitely won the evening in the women’s category with a spectacular Valentino gown of gold. The midriff was cut out — a big couture trend right now — over a gigantic skirt.

Andra Day wore a custom Vera Wang metallic gown: the designer worked with a welder to shape the intricate and delicate cut-out dress onto her body.

Double-nominee Leslie Odom Jr. went all out with a gold, double-breasted Brioni suit (and matching gold shirt; like many men, he wore no tie). He called out his Omega watch and Cartier jewellery on the red carpet. Double Oscar winner Chloé Zhao, known for her embrace of casual styling, subscribed to the Oscars dress code with a clever, pale gold Hermes dress from the house’s fall collection. The elegant, ankle-length piece featured discreet, tiny beads and latticework detail; she paired the dress with white sneakers and her signature braids.

Maria Bakalova wore a deeply plunging white gown by Louis Vuitton with delicate crystal beading; the bottom of the dress was made of an extravagance of tulle — some 100 metres — for maximum flounce.

Viola Davis, 55, rocked a custom Alexander McQueen white dress with lace cutouts on the torso over voluminous chiffon. The gown fit her impeccably, and she summoned a major fashion moment for her big night.

Tiara Thomas received an Oscar nomination for Best Original Song (along with H.E.R. and D’Mile) for “Fight For You” from Judas and the Black Messiah. She slayed the red carpet in a white tuxedo with a plunging cutaway vest, by Jovana Louis.

Angela Bassett, 62, wowed in an Alberta Ferreti off-the-shoulder number with exaggerated puff sleeves and a long slit up the front of the slim gown.

THE REST OF THE COLOUR PALETTE

Hollywood legend Rita Moreno, 89 — who made fashion waves a couple of years ago by re-wearing her own Oscar’s dress from the 1960s (see below) — chose a burgundy strapless gown with a matching tone textured evening jacket for the 2021 event (above).

Yuh-Jung Youn, the Korean acting legend who had done an award’s season sweep and became the first actor of Korean descent to win an acting Oscar (Best Supporting Actress for Minari) proved how elegant a black gown can be: the 73-year-old chose a belted gown made of subtle quilting and a long, full skirt, by Marmar Halim.

A pregnant Emerald Fennell — who won the Best Original Screenplay Oscar for Promising Young Woman — wore a Gucci chiffon gown with ruffles of green and pink. The whole awards season she has come up with characters for her looks: tonight she said her fashion muse was a pottery teacher who wants to ensnare you in a pyramid scheme.

Vanessa Kirby was pretty in pale pink, custom Gucci: the actress and fashion plate went for simple and strapless the better to emphasize her English rose complexion.

Glenn Close, 74 and long associated with Armani Prive, wore a royal blue sparkling tunic by the designer, along with purple gloves inspired by her mother. She paired the tunic with slim black pants, and declared she chose comfortable pumps for the evening.

Marlee Matlin, 55, looked more glamorous than we have ever seen her, wearing a boned and corseted Vivienne Westwood with show-stopping, floor-length, split-seamed sleeves.

Songwriter Diane Warren, 64, wore a white Valentino suit from this season, with a sequinned turtleneck that is causing fashion waves.

Daniel  Kaluuya — the Best Supporting Actor winner for Judas and the Black Messiah — put his Cartier diamond choker on display with a double-breasted black suit by Bottega Veneta.

Steven Yeun also went for a simple look, a more classic Gucci tux but with a teardrop bow-tie. From History-Making Winners to The Best Fashion Looks, Our 5 Favourite Moments From the 2021 SAG AwardsGrammys Fashion: Rounding Up the Good, Bad and Inexplicable Looks of the Night