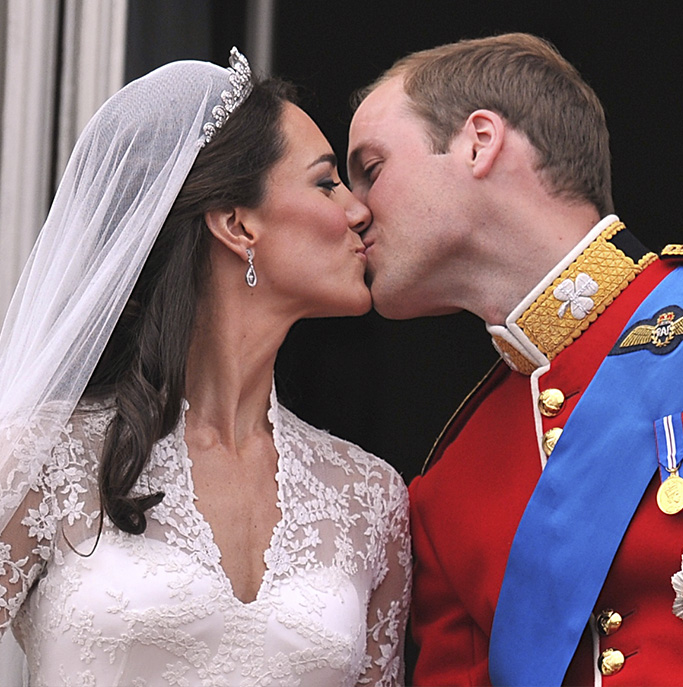 Their Royal Highnesses Prince William, Duke of Cambridge and Catherine, Duchess of Cambridge kiss on the balcony at Buckingham Palace during the Royal Wedding of Prince William to Catherine Middleton on April 29, 2011 in London, England. Photo: John Stillwell-WPA Pool/Getty Images

As William and Kate celebrate their 10th wedding anniversary on Thursday, April 29, the reality of just how far they’ve come is best summarized with the instantly iconic photo of Kate arriving earlier this month at Prince Philip’s funeral. Her poise, her bearing, the expert fashion theatre of the veiled hat and custom-fit mask, the way she beguiles the photographer’s lens, aware of the intrusion but fully in command of it at the same time. Kate sent a clear, wordless message that the younger generation has the line of succession battened down. This is what a Queen-in-waiting looks like, ready to support her husband, the man who will be King.

Ahead of the couple’s anniversary, they released these stunning photos, taken just this week, via their @kensingtonroyal social media accounts. The official account of the Royal Family (@theroyalfamily) also posted the photos, with the caption reading, “Wishing The Duke and Duchess of Cambridge a very happy wedding anniversary. Today marks ten years since Their Royal Highnesses exchanged vows at Westminster Abbey.”

Later, thanking fans for “the kind messages on our wedding anniversary,” the Duke and Duchess of Cambridge shared an adorable never-before-seen family home video of their three children – George,7, Charlotte, 5, and Louis, who just turned 3 – enjoying a hike on the sand dunes in Norfolk, where the Cambridges have a country home. The video, shot by Will Warr, was filmed in autumn 2020.

This week our screens will fill with throwback images of their fairy tale wedding at Westminster Abbey. Kate was an ethereal vision in a fitted long-sleeved Alexander McQueen with lace bodice, the Cartier Halo tiara holding her veil in place. While William was dashing in the scarlet tunic of a Colonel in the Irish Guard. Some 1,900 invited guests made it inside the abbey; tens of millions more watched around the world, from the bride’s arrival to the carriage ride to the famous balcony kiss. Not to mention fun highlights including performances by Elton John and Ellie Goulding, Pippa’s suddenly famous rear-end and the scenery-chewing giant fascinators on cousins Beatrice and Eugenie.

Three children and a heavy portfolio of royal duties later, the couple has not really put a foot wrong, as the Brits would say. Here is a look at how they built the foundation together, over the past decade, to become such an effective and admired royal power couple.

In retrospect, and especially with the example of what happened when Harry rushed into marriage with Meghan, the long years of dating for college sweethearts Will and his Waity Katey were very wise indeed. The first known shot of the two as a couple was from a 2004 ski trip, when they were both students, and housemates, at St. Andrews University in Scotland. When Will did pop the question, on a romantic safari in Africa in 2010, Kate, with her supportive family behind her, knew exactly what she was taking on, and was mentally and practically prepared for the enormous pressure and lifelong commitment to the Crown. For his part, William was also able to be certain he had made the right choice for himself and for the role his wife would be destined to play. Modern times meant they were also able to live together ahead of their engagement, another contributing factor to the stability of their union.

They then made another very clever decision, carving out time for themselves away from London. When William accepted the role of air ambulance pilot in Anglesey, Wales, the couple moved to the small village to begin their married life in relative peace and normalcy. Kate was able to shop in the local market and they were free of senior royal working duties, save for the mandatory big all-family dress up events, such as Trooping the Colour.

The Nursery Years at Anmer Hall

The Queen’s wedding present to William and Kate (you know, besides the fancy titles of Duke and Duchess of Cambridge) was the keys to Anmer Hall, a 10-bedroom Georgian country manor on the Queen’s Sandringham Estate in Norfolk. Kate, along with famed British country house designer Ben Pentreath, worked on the £2 million renovation, cantering family life around the newly designed kitchen. This was quite a revolutionary design decision for royalty, where staff would normally man the stoves in a kitchen tucked away from the grand reception rooms. When William was transferred to the Cambridge air base for his work as a helicopter rescue pilot, the family relocated to their country pile. Prince George was born in 2013, followed by Princess Charlotte two years later in 2015, and Anmer Hall served as a quiet home for the family’s nursery years, located 185 kilometres from their official residence at Kensington Palace. Again, the couple was very wise to give themselves time to adjust, this time to life with young children. Kate was again able to live an “almost” normal life focused primarily on motherhood.

Back to School, Back to Work

In 2017, William and Kate made the decision to return to London. William resigned his post as ambulance pilot, understanding it was time for him to take on more royal engagements. Kate stepped up and into her senior royal public service role as well. Prince George, who had been attending a Montessori school in Norfolk, began his first day of primary school that fall, attending Thomas’s School in Battersea, where his sister would join him two Septembers later. The next year, after a third difficult pregnancy (Kate suffered from gravidarum hyperemesis, or extreme morning sickness), Prince Louis was born in April of 2018.

The couple began developing their own portfolio of charitable causes — William focused on mental health and, of late, health-care workers; Kate focused on women’s issues and early childhood education — as well as taking on an increasing load of patronages and engagements on behalf of the Queen.

The pandemic accelerated a timeline that saw William and Kate front and centre in the Royal Family. In the early part of the pandemic, the young couple led the way on Zoom (although it must be noted the Queen’s adaption of digital connection has been an extraordinary and an edifying sight to behold). Then when restrictions were relaxed, they were the first to begin appearing in public again, as their relative ages (both will be 39 this year) made them less vulnerable than Charles and Camilla and the Queen, of course. But this changing of the guard had very much been in process. Charles has made it clear he wants a “slimmed down” monarchy, with his heir William and daughter-in-law Kate front and centre. While Prince Edward and Sophie, Countess of Wessex took on many of Prince Philip’s duties when he retired in 2017, and Anne the Princess Royal has always been known as the “hardest working” royal, the departure of Harry and Meghan and the forced retirement of Prince Andrew meant there was a lot of work that needed to be covered. Charles and William both often take on duties of the 95-year-old sovereign.

The remarkable thing about William and Catherine, as she would prefer to be known and as the palace styles her, is how unbelievably well they have been doing their jobs. Not just the work, but the harder work of staying out of the tabloid maelstrom. They don’t complain, they don’t share their feelings, they arrive on time and impeccably turned out and gracious. That has got to be far harder than it looks. Sure, beside the drama-fest of Harry and Meghan they may seem boring (or as Harry suggested “trapped”). Well, if they are then they are much better actors than the professionals. Because William and Kate seem to really like each other, they seem to really like their work and the people they meet, and they seem to really like their kids. We don’t know more because they have managed, through their careful strategy to give themselves time and space to adjust through their first ten years of marriage, to keep their true private life private. They are following the stoic and brave and confident example of the Queen herself, who remained married to her teenage sweetheart for 73 years. We wish the same long-lived union for the Cambridges, Britain’s King and Queen-in-waiting in the wings behind Prince Charles.