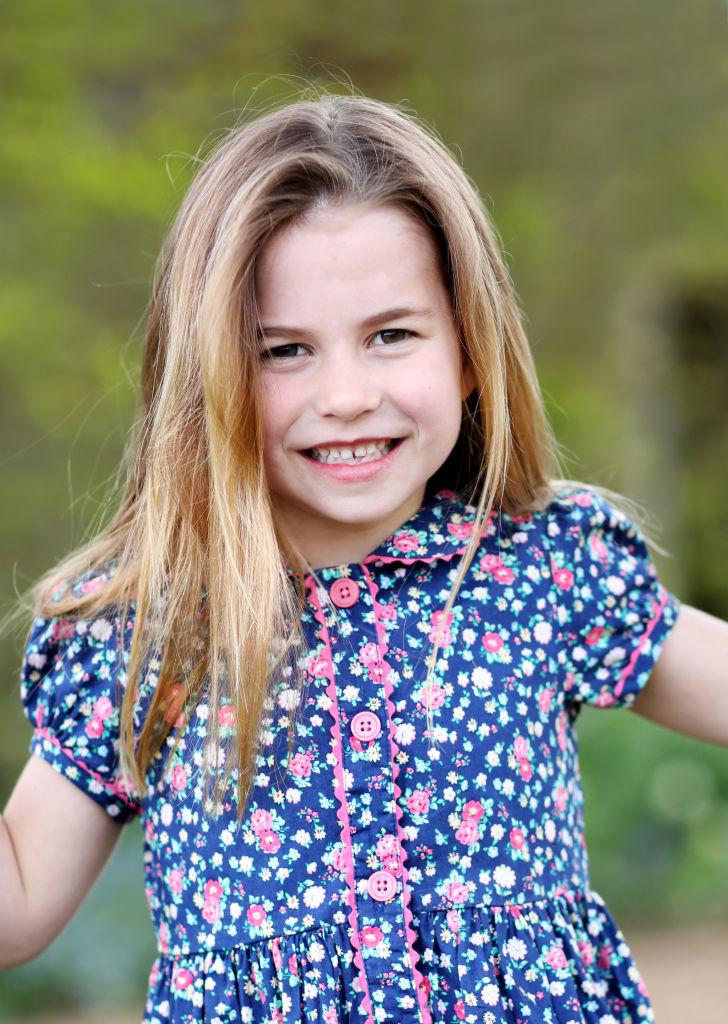 Prince William and Duchess Kate have shared a new photo of their daughter, Princess Charlotte, in honour of her sixth birthday on Sunday. The portrait, captured by the duchess, was taken this weekend at the family’s country home in Norfolk.

The photo, which was shared on the Royal Family official social media channels — and not, as per usual, on William and Kate’s @kensingtonroyal account—was a happy surprise for royal watchers who worried the traditional birthday portrait would not happen this year because of a four-day sports-related social media boycott in Britain, which started on Friday. Across the nation, cricket and rugby leagues joined football clubs in the protest against racism and abuse online. Late last week, Prince William tweeted that as president of the Football Association, he would be joining in the protest, saying, “As President of the FA I join the entire football community in the social media boycott this weekend. W,” the prince wrote.

The sweet sixth birthday portrait comes just days after Kate and William’s 10th wedding anniversary, when they shared a never-before-seen family home video of Charlotte along with her brothers George and Louis, as they went on a nature hike in Norfolk. The video, shot by Will Warr, was filmed in autumn 2020.

Charlotte, with her usual spirit, is seen playfully wrestling with her father and running with her siblings, with playtime including a segment of the princess with baby brother Louis on a teeter totter. The clip ends with the royal brood roasting marshmallows at a bonfire.

A talented amateur photographer, Kate is also patron of the Royal Photographic Society, a role previously held by the Queen for 67 years. Over the last year, the duchess has also channeled her passion for photography into Hold Still, a book of 100 portraits submitted by Britons documenting life during the coronavirus pandemic, set to be released in May.

Some of Our Fave Photos of Princess Charlotte

This past December, the Cambridge family made a surprise red carpet appearance at London’s Palladium Theatre for a pantomime performance held in honour of essential workers from NHS staff to delivery drivers, trash collectors and emergency services personnel and volunteers. Because of pandemic restrictions, it was the royal kids’ first public appearance in months. In this video, Charlotte displays a cheeky streak of independence by refusing to hold her father’ s hand.

Last year, for her 5th birthday, the palace shared photos of Charlotte and her siblings delivering home-made pasta and bags of groceries to retirees living in coronavirus lockdown near the family’s Sandringham estate. In this series of portraits, she is wearing a blue and white houndstooth dress from Zara. Also in honour of Charlotte’s fifth birthday, Queen Elizabeth shared a stunning family portrait taken by famed photographer Annie Lebovitz for the Queen’s 90th birthday in April 2016. Charlotte, who is the Queen’s fifth great-grandchild, is seated in Her Majesty’s lap.

Other images show the young royal with Prince Philip at Trooping the Colour in 2017, and the princess as a flower girl at Princess Eugenie’s wedding on Oct. 12, 2018. For her fourth birthday, the palace shared this adorable photo of Charlotte, who clearly loves the country life, at their home in Norfolk.

And pretty in pink for her third birthday …

With the birth of her younger brother, Prince Louis, the young princess, 2,  became the first female royal in history to keep her rank in succession (which is currently 4th), instead of dropping back a place behind a younger brother. This was due to a change of succession laws in the U.K. that were updated shortly before the birth of Prince George in 2013, which would allow for a first-born daughter to take precedence over any younger brothers. This decision changed a 300-year rule that the heir to the throne would only pass to a daughter in the complete absence of sons.

When she was just 16-months-old, the princess travelled to Canada with her parents and brother,  Prince George, 3, in September 2016, on a whirlwind eight-day tour to B.C. and the Yukon. During a tea party event staged for the children in Victoria, the young Princess reportedly said her first word in public. She was overheard yelling “pop”  as she chased a balloon in the garden of British Columbia’s Garden House. (For more on our coverage of the Royal Canada Tour 2016, go here.)