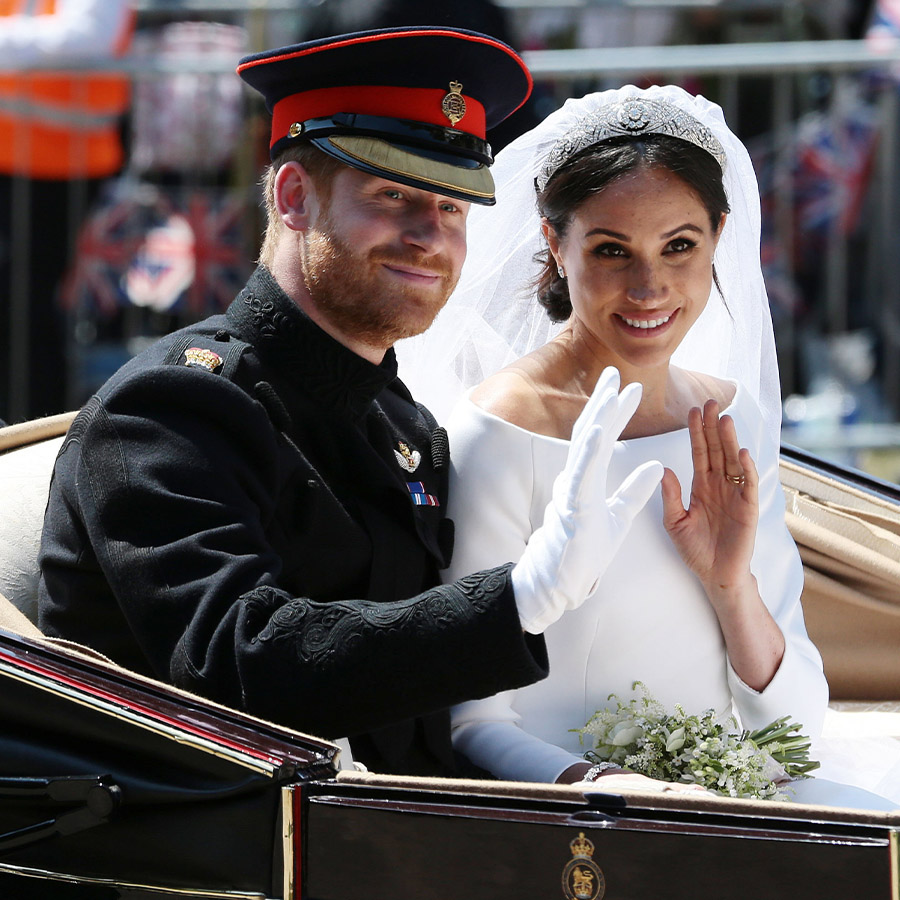 Prince Harry, Duke of Sussex and Meghan, Duchess of Sussex wave from the Ascot Landau Carriage on their wedding day. The couple are celebrating their three-year wedding anniversary this week amid a flurry of new projects. Photo: Aaron Chown/WPA Pool/Getty Images

Wednesday, May 19 marks three years since Harry and Meghan walked down the aisle at St. George’s Chapel, and what a whirlwind of headlines have ensued since their big day. Archie is 2 years old, almost to the day, and Meghan is set to deliver the couple’s second child, a daughter, soon. But the California-based social justice advocates and fledgling entrepreneurs are not resting on their laurels; huddled around this anniversary week have been a flurry of new announcements and news cycles.

To mark their anniversary, the Sussexes announced through their Archewell Foundation they will be building a Community Relief Center in Mumbai, India. This is the third such centre they have built in partnership with World Central Kitchen, following similar projects in Dominican Republic and Puerto Rico. The Indian centre will focus in the immediate future on relief efforts during the COVID-19 second wave that has hit the country so hard.

But that’s not all. For a quick recap (with more in-depth analysis below) there has been: Harry’s interview on Dax Shephard’s podcast Armchair Expert, where, in the process of discussing his own mental health, he threw shade on the parenting of not just Charles, but also the Queen and Prince Philip, so recently departed.

There were the couple’s appearances (Harry onstage, Meghan remote) on Vax Live. There was the announcement for Meghan’s upcoming children’s book. Then came news of a multifaceted (though vague) new deal with Procter & Gamble; stay tuned for where that got complicated, also below. Meghan’s lawsuit against Associated Newspapers was back in the news. But the big drop comes this Friday, May 21: the long anticipated, five-part, celeb-studded series on mental health, The Me You Can’t See, co-executive produced by Oprah and Harry, both of whom share more of their own struggles on camera. Phew! That is all on top of Harry’s new gig as Chief Impact Officer at start-up Better Up.

Is all this wheeling and dealing and attendant carefully orchestrated public relations blitz a case of the Sussexes striking while the iron is hot? Will the couple, known for nights in roasting chicken, sit around and watch their wedding video on Wednesday? (They are also known for the sweet, homey habit of exchanging handmade gifts for romantic occasions, such as Meghan writing out their wedding vows for their “paper” anniversary, in her signature calligraphic hand.)

The couple certainly look incredibly happy together at the three years of marriage mark. Meghan is glowing with her second pregnancy and they both have shared their excitement to complete their family with the imminent birth of their daughter. Harry has said that they had decided to stop at two kids for environmental reasons. For all the speculation that Harry misses his homeland, it seems apparent, rather, that Meghan has liberated her prince from a royal life he had long ago decided was not working for him. She gave him the motivation and strength to do it. They have fame now on their own terms, and having resigned themselves to the fact that the son of the future King of England was never going to be able to slip off into the sunset in complete anonymity, that they would would instead combine their star power Hollywood-style and make enough money to pay for the security of their growing family. Their attempt to control access (and narrative) may be a bit hopeful or naive still, but at least they have more choice in what they take on.

If they are lucky, they will have Oprah’s stardust carrying them along. After all, everything Lady O touches turns to blockbuster ratings and an endless stream of paydays. But for lesser mortals, wall-to-wall publicity pushes for projects on so many different fronts carry the danger of resulting in overexposure and waning interest. Frankly, the wellness and uplifting content the Sussexes are focused on runs the danger of running together in the public mind. We all have a finite limit on consuming what is good for us. Will they have to keep upping the ante with inside-the-monarch revelations to keep their projects in the spotlight? Will Meghan’s California chill fashion continue to draw as much attention (to her, and her projects) as her royal wardrobe did?

Then there is the power of mystique that they might forgo by sharing too much too often: After all, the Queen herself sets the standard for maintaining public interest. Famously above the fray, she has proven over and over again that the less she reveals, the more fascinating and popular she is.

The many hands in many pies approach can also open up the couple to criticism when a brand built on wokeness and empathy rubs up against the perception of them throwing too much shade. The backlash has been sharpest against Harry’s Dax Shepard interview. In the podcast, given to drive interest in his series with Oprah, Harry shared with the actor that life in the royal fishbowl was a mashup of “The Truman Show and living in a zoo.” He says now he knew from a young age royal life wasn’t for him. “I was in my early 20s and I was thinking I don’t want this job, I don’t want to be here. I don’t want to be doing this.” He followed with another reference to his fear of history repeating itself. “Look what it did to my mum. How am I ever going to settle down and have a wife and family when I know it’s going to happen again?”

But in a style of confessional that can only be described as boomerang, he shared some lighthearted moments about dating Meghan, and moving thoughts around his work on Invictus, “Healing other people heals me,” he said. “That’s where the compassion comes in. Once you’ve suffered, you don’t want anyone else to suffer.” Then, whiplash, he hung some more royal dirty laundry up for public perusal, building on the narrative he and Meghan crafted in the now-notorious Oprah sit-down this past March. Harry took a pot shot at his father, Charles, saying he wanted to “break the cycle” of “genetic pain and suffering.” Thus, he impugned both his own father and his grandparents, who raised Charles. Harry made a fleeting reference to Charles’s well-documented misery at Gordonstoun boarding school in Scotland. Harry is, of course, free to tell his own story all he wants; he gets into murkier ethical ground when he plays armchair shrink to his family members.

He also roused American ire by claiming in the interview that the first amendment is “bonkers.” Saying he doesn’t understand it it, “because I’ve only been here for a short period of time,” he nonetheless went on to say, “You can find a loophole in anything and you can capitalize or exploit what’s not said rather than uphold what is said.” That’s clear as mud, really. Also it begs one to wonder what Harry, if he is such a newbie to the first amendment, is doing as a new appointee on the star-studded Aspen Institute’s Commission on Information Disorder, co-chaired by Katie Couric. Dropping this offhand tidbit into a podcast goes against PR 101 to warn celebrities — and the Sussexes are now American celebrities by trade — that the more they talk, the more scrutiny they draw to themselves.

The woke highroad the couple have claimed is also not without ethical risk by association. No sooner had they announced a partnership with international packaged goods empire Procter & Gamble than a backlash ensued. The couple worked with P&G on Vax Live, then signed on to “build on joint aspirations” with the company. The statement on the Archewell website reads: “Based on shared values, the partnership will focus on gender equality, more inclusive online spaces, and resilience and impact through sport.”

Sounds great, and there is a thematic synergy with all the Sussexes’ passion projects. Then the internet realized that P&G has a problematic business in skin whitening creams in India, Malaysia and Singapore. The popular product is called White Radiance; the company has come under much pressure to remove it from sale as it promotes the idea that darker complexions are less desirable. These kinds of conflicts could have been avoided or dealt with ahead of major announcements, if the Sussexes had a few fewer major projects on the go.

The news of Meghan’s children’s book — The Bench, due in summer around the same time as the couple’s new baby — is a sweet enough simple project. The book explores the relationship between fathers and sons and includes an illustration featuring a red-haired soldier Dad, a loosely disguised tribute to Harry. This begs comparison to how their own intergenerational dramas have played out publicly.

The news also broke at the same time as Kate’s book Hold Still launched, a charitable project dedicated to capturing imagery of the resiliency of Britain during the pandemic.

Now that Harry and Meghan have left the country, one would hope that the pitting of Sussex against Cambridge (or, more potently and damagingly, the pitting of Meghan against Kate) in print was over. But, of course, that was a fantasy. The perpetuation of a rivalry is central to the tabloid sturm und drang cycle. Then we have the story of Will and Kate taking to YouTube (and signing up half a million subscribers off the bat) as a new means of crafting direct communications with the public and modernizing the Palace’s image.

But all these anniversary-week tempests may be nothing compared to what might drop with The Me You Can’t See this Friday. The much-anticipated mental health series promises intimate moments of sharing by celebrities (from Glenn Close to Lady Gaga, DeMar DeRozan to poet Hussain Manawer) about their own struggles with mental health. Oprah and Harry both share more of their own stories (putting the beleaguered Palace back on high alert). Oprah has said the intent behind the Apple+ TV project is to de-stigmatize mental health issues. “Now more than ever, there is an immediate need to replace the shame surrounding mental health with wisdom, compassion, and honesty,” Oprah said in a statement. “Our series aims to spark that global conversation.”

Those conversations, as important as they are, may be overshadowed by any fresh nuggets of pain and recrimination mined from his family history that Harry shares in the broadcast. That would be a shame, to the larger conversation, and to the healing that needs to take place in Harry’s very public family drama. On the healing front, there is also an image of Harry walking behind his mother’s coffin in the promo clip for the series. If he and Meghan wanted to move to America for greater privacy, why would he inject a visual reminder of his most painful memories back into the conversation?

Let’s hope that after this initial flurry of deals and partnerships and projects that Harry and Meghan will both be able to look forward more often than backward when they share details of their lives and passions. And let’s hope they have a lovely anniversary, with Archie and the dogs and the chickens in their sunshine-strewn compound in Montecito.