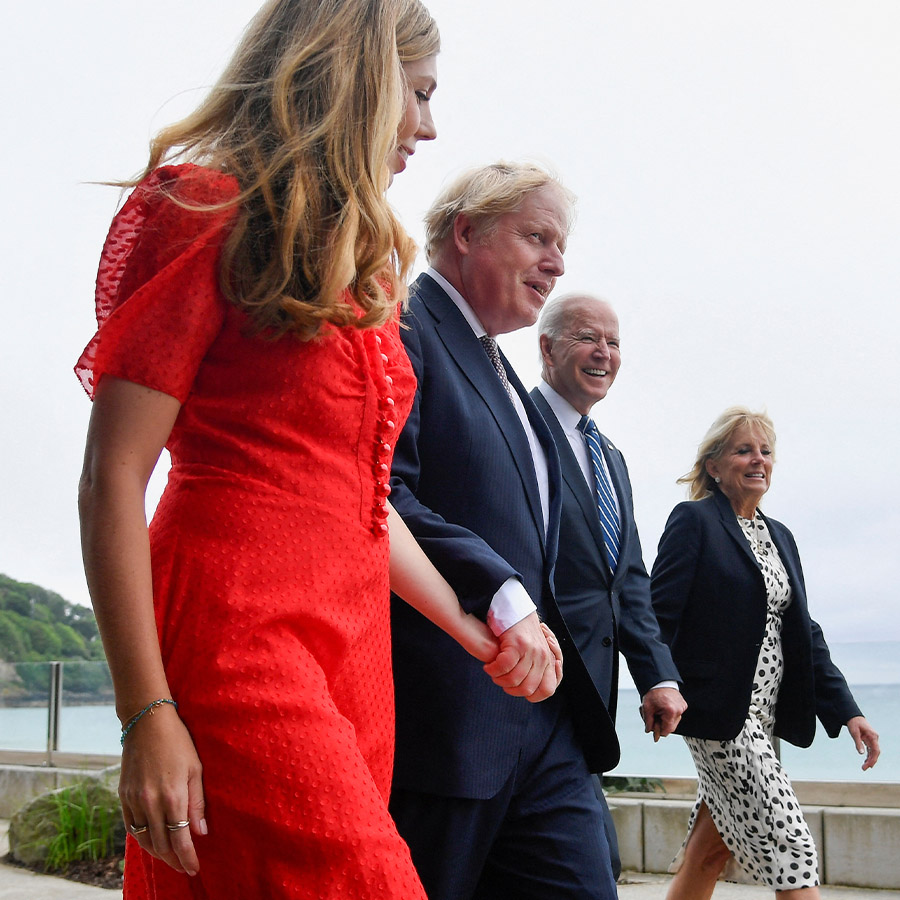 Experience is the best accessory, we confirmed over the weekend at the G7 summit in Cornwall, England. The first ladies of the world’s largest democracies used the spotlight to deploy some deft diplomatic fashion. With a bonus appearance by the Queen — the reigning diplomatic wardrobe champion with the most recognizable fashion template in the world — plus a two-outfit star-turn from fashion-forward younger royal Catherine, Duchess of Cambridge, this past weekend was a master class in power dressing.

While newlywed, and new mom, Carrie Johnson hit a sustainable note with her designer dresses sourced from high-fashion rental companies, her bohemian choices were chosen for beachside barbecues but just didn’t have the polish, fit or authority of more experienced political spouses such as Jill Biden and Brigitte Macron. For once, youth was overshadowed by women of a certain age (Biden is 70; Macron is 68).

The young were also outnumbered; Sophie Gregoire Trudeau was not present on this trip. We missed the Canadian labels Justin’s better half usually shows off on these kinds of trips. (We also missed former working royal Meghan Markle busting out those same Canadian labels on the world stage, for that matter.)

In the recent past we saw glamorous former-model wives, such as Carla Bruni of France or Melania Trump of the U.S., try to channel that greatest political wife fashion plate of all time: Jackie Kennedy. But Trump, especially, always looked stiff, and her outfits could devolve into pantomime or cosplay (think of the pith helmet and white hunter safari suit in Africa).

But Biden and Macron herald a new era of power dressing, where authenticity is more important than theatre. These political spouses are rewarded for knowing who they are, and what their style (or “brand,” if you will) is.

Take, for instance, Biden’s opening fashion salvo, with the the Zadig & Voltaire LOVE jacket over a Brandon Maxwell custom black and white print dress. First of all, she gets points for wearing Maxwell, an American couturier known for dressing celebrities (from Gaga, to Blake Lively, to Meghan Markle). But the LOVE jacket — an overture of friendship after America under Trump pulled away from globalism, and exquisite jab at Melania’s brazen choice to wear that Zara I-Really-Don’t-Care-Do-You jacket to visit immigrant children detained at the U.S./Mexican border.

The rest of Biden’s wardrobe was mostly repeats, another good message of sustainability (and a nod to the royal family, all known for repeating outfits). There was the lovely bright pink L’Agence blazer over an Akris zip-front white polo dress that she wore on the special mission with Kate to a Cornwall school to raise awareness about early childhood education, something Biden and the duchess are both passionate about. The pink looked terrific in pictures with Kate’s belted Alexander McQueen shift dress. Kate’s choice also underlines the importance of polish at photo calls: Kate is only six years older than Carrie Johnson (39 and 33, respectively), but has always dressed like a “grown up” for professional appearances, and harnessed gravitas — and respect — by doing so.

There was a sophisticate floral take with a favourite Biden Oscar de la Renta shift dress with a black background to a performance alongside Carrie Johnson and Brigitte Macron; it was a sentimental re-wear, as Biden wore it to her husband’s victory speech during the 2020 election.

Biden’s finest fashion moment of the trip came Sunday morning, when she re-wore a stunning, sleek navy Carolina Herrera two-piece, a peplum top with white trim over a slim skirt. She paired this church outfit with two-tone Herrera matching pumps.

When she changed to meet the Queen later that afternoon, the pale blue jacket and dress were a little boring by comparison. But that actually felt well-judged: it feels like it would be wrong, and inauthentic of Jilly from Philly, to try to outshine the Queen. The two women looked great, and comfortable, together, with Her Majesty in a peony pink floral dress. Sophisticated, but not flashy.

As for Macron, who is a style icon most often dressed by French heritage label Louis Vuitton, this pandemic moment was a time for restraint — not like the fashion wars with Melania that went on in Washington and Paris when her husband tried to charm Trump (and ended up in a literal arm wrestle).

She wore some great clothes this trip: notably for her arrival in a knee-length Chanel boucle tweed coat, then an eye-popping (and impeccably fitted, as all Macron’s couture wardrobe always is) Louis Vuitton blue shift dress with matching coat.

Another Macron highlight was a slim, cropped-ankle beige pantsuit with just the right touch of femininity in a lace blouse (pundits surmised her espadrilles were from inexpensive Spanish fashion brand Castaner, a favourite of the Duchess of Cambridge). This choice allowed us to compare directly Carrie Johnson’s own pantsuit worn to the performance event. Her blue “power” pantsuit with flared trousers was by Amanda Wakely; originally costing about £990, and rented for a fraction of that. Look, renting is great. And I love that she worked so hard to highlight the economic and sustainable option. But the suit just didn’t fit, which is why rentals for important international photo ops can be problematic.

The larger message Johnson was sending through her clothes was one of youth: she went for a dark Vampire’s Wife gown (which hit her at a slightly awkward length) for the royal reception, and a hot pink Roksanda for the initial greeting of leaders and spouses on the beach. Both British labels, both beloved by trendy women everywhere (even Kate wears Vampire’s Wife, by Susie Cave, the wife of rocker Nick Cave). Johnson also wore a goldenrod-coloured Alice Early dress — again, great for a beach setting, but less great for gravitas.

The new mom was criticized by the British press for using her son with Boris Johnson, Wilfred, as a prop. He likely added a bit of levity and warmth to the proceedings, in my view. All that small talk must get boring. Few people have the stature of the Queen to cut through the noise, as she did with her clever teasing, “Are you supposed to look as if you are enjoying yourself?”

Johnson is new to the scene. Though Joe Biden only recently became the president, Jill Biden has eight years as a VP’s wife and decades as the wife of a senator to fall back on. Macron has innate French chic and is a veteran of many political summits and tours. I don’t want to criticize Carrie Johnson, who is after all a new mom and a new wife, for any sartorial misses while she figures out who she is and how that can be translated into a digestible fashion statement.

Plus we don’t want to ever pile onto someone who is having a tough time in the merciless British tabloid storm: Carrie has been lambasted of late for her expensive do-over of 10 Downing Street. The wedding last week, and her turn as hostess to the world this week, was clearly meant to be a public relations reset. But as to fashion, I’m just saying, Stella McCartney was RIGHT THERE on site, speaking with Prince Charles and fashion industry leaders from the G7 about sustainability in the industry.

Couldn’t Carrie gradually shift away from all those rentals and take inspirational mentorship from someone like McCartney, a leader in vegan and sustainable production? The duo could become a sort of British fashion promotional dream team — like Kate and Sarah Burton at Alexander McQueen. Or even her predecessor Samantha Cameron, who worked in design herself and championed the work of British labels such as Roksanda Ilincic, Erdem and Gilles Deacon on the world stage.

Instead of piling on, though, let’s turn the story on its head and applaud this lovely instance where older women, such as Biden, Macron, perpetually professionally chic EU head Ursula von der Leyen and the Queen, obviously, are celebrated for their confidence. Women in power positions (von den Leyen, the Queen) walk an even trickier line than the wives, as they must get people to focus on their words and ideas, rather than their outfits. But then there is the glorious case of Angela Merkel, the longtime, widely respected German Chancellor set to retire this year. From the beginning of her time in the public eye circa 2005, she firmly rejected fashion, wearing nondescript, non-form-fitting pantsuit separates (and often eschewing the female politician’s and royal women’s penchant for monochrome head-to-toe shades). The only person who ever criticized her for her look was Karl Lagerfeld, and his pettiness was more of a bad look for him. Merkel may be alone in effectively eliminating fashion coverage and keeping the focus on her policies.

When you are older, you know who you are. When clothing matches your personality, you appear more confident. When you dress consistently within that brand-expression of your personality, you are putting others at ease. That is the very heart of diplomatic dressing, and it is why it is so very important. Just ask the Queen.